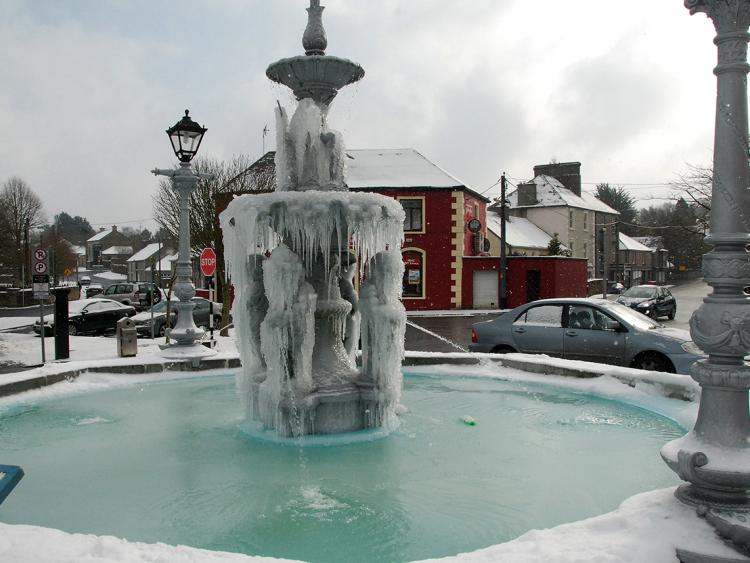 A fountain in Roscrea, Co. Tipperary, frozen solid during the recent cold snap

Severe weather events are fast becoming a regular feature of Irish life and these events, which are extreme in nature, prove very challenging for all services including local authority services. Storm Emma combined with the “Beast from the East”, demonstrated Nature’s raw power across the county which is something we haven’t seen for years and represented very challenging conditions in many areas.

The Council’s Severe Weather Plan was activated on Monday 26th February following a meeting of its Crisis Management Team and teleconference consultations with An Garda Siochana and the HSE, bringing a range of formal emergency management actions and resources into play. This team continued to convene nine times over the course of the severe weather event via meetings, video conference and conference calls, including the setting up of a What App’s group for communication purposes;

Chief Executive Joe MacGrath stated that “The Council’s Crisis Management Team, Severe Weather Team, Outdoor District staff and Civil Defence volunteers were in constant liaison throughout the severe weather event and worked tirelessly throughout the storm to ensure a safe environment for the people of Tipperary. A total of 2,000 tonnes of salt was used over the course of the weather event with 3,200 km of roads covered. I would also like to express my gratitude to the public for taking our advice and staying indoors during the severe weather red alert”.

Deployment of Resources
The Council’s fleet of specialist vehicles and equipment for dealing with snow was fully with staff working tirelessly through the number of days preceding and during this weather event. The Council’s salt stores, with capacity for 2,700 tonnes of salt, were also stockpiled in anticipation of the severe weather.

The situation was monitored regularly through conference calls with all participants to assess the situation throughout the county and appropriate action was taken as considered necessary.

A total of over 250 outdoor staff were across the 5 District’s in addition to 25 JCBs and 15 mini salt spreaders mounted on pickups to clear footpaths in the towns and villages. A total of 2,000 tonnes of salt were used over the course of the weather event with 3,200 km of roads covered.

All 12 Fire brigades involving 115 fire-fighters in the county were brought in on standby at on Thursday 1st March and remained on station until on Friday 2nd March. During this standby the Fire Service responded to just 5 incidents in total, a reflection that the public had heeded the weather alert warnings.

The Water Services Section of the Council, as the agent of Irish Water, was pro-active, in the days leading to the arrival of Storm Emma, in ensuring the maximum availability of Water Services staff, ensuring that all water services installations, whether drinking water treatment plants or treatments plants were adequately stocked with chemicals and other materials required in the treatment process and inspecting all such treatment plants to ensure that all machinery and equipment was in full working order. Any issues which had manifested themselves were resolved by 12.00 noon on Saturday, 03 March.

On Sunday, 03 March a water supply issue arose at Cashel where low reservoir levels were causing supply disruptions to the town and surrounding areas, locations on ground. Staff from the Water Services Section were actively engaged in the restoration of normal reservoir levels and, in the meantime, arranged for the supply of a water tanker to facilitate the supply of drinking water to affected customers. This tanker was located at St. Patrick’s Hospital, Cahir Road, Cashel, from onwards. Details of these arrangements were posted the Council’s website, with propagation to , Facebook MapAlerter. Direct contact was made by Water Services staff with vulnerable customers and local elected members to advise them of the situation.

From a Housing perspective, arrangements were put in place to ensure those persons known to be homeless or “sleeping rough” across the county had access to food supplies and shelter. Gardai were notified of out of office emergency arrangements and made aware of available emergency accommodation. Six (6) units of accommodation made available by the the period of the weather event in Towns throughout the county and a number of rough sleepers were accommodated in emergency bed and breakfast for the duration of the severe weather event. The council also linked in with staff from the Department of Social Protection, the HSE and the voluntary housing , NOVAS & SIMON in relation to accessing emergency accommodation & helping people with the provision of clothing and medical attention.

Civil Defence, with nine 4x4 emergency vehicles and over 30 volunteers throughout the severe weather event, delivered up to 60 meals to the vulnerable and elderly with the local meals on wheels. Transport support was provided for essential medical staff and patients to the various hospitals and nursing homes around the county. An emergency call was responded to from Nenagh Gardai to an injured hill walker on Keeper hill and food parcels and essential supplies were delivered to residents in the Ballingarry area. Assistance was also provided to Wexford Civil Defence and to local Primary & secondary schools in clearing snow from footpaths and driveways to allow safe access to the schools.

Keeping the Public Informed
The Council’s out of hours emergency call management service was activated from on Thursday 29th February and dealt with over 150 calls of which 34 were incidents;

The public advised to visit the winter ready – www.winterready.ie detailing the recommended measures they should take during periods of severe weather.

The Council posted details of news, weather alerts, road closure details, safety advice and general updates using the communications channels of , Twitter, Facebook MapAlerter. The of the Council’s was modified to make the severe weather updates more easily visible and accessible. Forty items of news were posted on to each communication channel. Over 12,000 people visited the , with 32,833 page views; 63,300 tweet impressions were made and Facebook reached 92,900 people. The number of people who engaged with the Facebook posts was 12,100. Over 40,000 text alerts and 53,600 emails were issued to MapAlerter Subscribers and approx 7,800 Alerts were issued to people who downloaded the MapAlerter “App”.

“Cathaoirleach Cllr Phyll Bugler as Cathaoirleach of Tipperary County Council commended the commitment of staff who worked across a variety of sectors to keep essential services operational. Through their efforts, in very difficult conditions, essential services like hospitals, nursing homes care facilities maintained their operations. The Council is extremely grateful to our staff, volunteers, local contractors and public bodies who assisted in many ways in preparing for and responding to the extreme weather situation and its aftermath over the past week”.