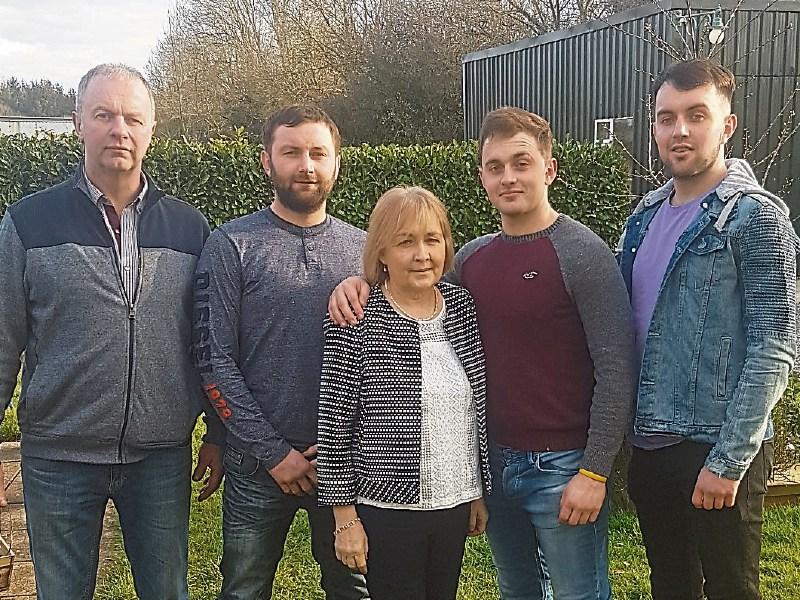 Teresa Power from Templenahurney, Bansha, who last September successfully underwent a liver transplant, pictured with, from left, her husband Richie and sons Colin, Shane and Kevin

A Bansha woman who successfully battled two bouts of serious illness in the last three years, and whose daughter lost her long and brave battle with cancer two years ago, has spoken of the new lease of life that a liver transplant has given her.

54 year-old Teresa Power says "she doesn't know herself" since she underwent the life-saving transplant in St. Vincent's Hospital in Dublin in September of last year.

"I couldn't believe it when I opened my eyes after the operation", she says.

"It was just unbelievable, I just felt so good for the first time in years".

Teresa was at the Mansion House in Dublin yesterday, Tuesday, to help promote the national launch of Organ Donor Awareness Week.

"The gift of life is the greatest and most precious gift you can give anyone", she says.

"A second chance gives you a different outlook on life, you appreciate everything".

She says that her story highlights the importance of organ donation, and how vital it is to create an awareness among all age groups of the necessity to sign up to become a donor.

"Without the transplant, I wouldn't be here to tell my story. My liver was failing rapidly. Not a day goes by that I don't realise how lucky I am to have been given this chance".

The battles with serious illness that the Power family have fought over a long number of years represent a story of amazing courage and resilience.

Their ordeal began when Teresa and her husband Richie's eldest child and their only daughter, Fiona, who had a brain tumour since she was 14 years old, discovered it was cancerous in 2011.

28 year-old Fiona, who was a nurse in Beaumont Hospital in Dublin, eventually lost her brave battle and passed away two years ago last Friday.

While looking after Fiona in the last few years of her life, Teresa was dealt another major blow when she was diagnosed with cancer of the tongue and neck in May 2015.

"I never smoked a cigarette in my life, but when my dentist noticed a small ulcer on my tongue he referred me to a consultant at Cork University Hospital", she says.

She successfully underwent surgery to remove a piece of her tongue and was given the all-clear after radiotherapy treatment.

She said it was difficult looking after Fiona while she was fighting her own cancer battle, but says it was something she had to do.

"We have some very good friends and family who were on standby and were a great help during that time. And Fiona and myself helped each other", she says.

However Teresa's troubles didn't end there. She had been diagnosed with primary biliary cirrhosis, an auto immune condition, in 2002 and after a liver biopsy was performed in late 2016 her consultant, Professor John Crowe, referred her to Professor Aidan McCormack in St. Vincent's Hospital, after which she was put on the list for a liver transplant.

"I couldn't believe it, after everything that had happened to Fiona and myself", she says.

"The quality of my life at that time was non-existent. I was feeling at my lowest point, both mentally and physically.

"I had no energy and my colour was so bad. I couldn't even go to the local supermarket".

But the worst symptom she experienced was an itch "from your head to your toes. It was unbearable and I couldn't sleep with it.

"It was so bad you couldn't care less about anything".

She travelled to St. Vincent's Hospital twice in the belief that she would undergo the liver transplant, but on each occasion the operation was postponed. The second time she was ready to be anaesthethised when the surgery was called off at the eleventh hour.

However six months ago it was a case of third time lucky, and she hasn't looked back since.

"I was positive facing the operation, I knew nothing would be as bad as how miserable I felt beforehand”.

Since the transplant life has improved for Teresa and Richie and their three sons - 27 year-old Colin, 22 year-old Kevin and 20 year-old Shane.

She gave a commitment to never drink alcohol again but says that wasn't a problem, because she was always only an occasional drinker and her illness wasn't alcohol-related.

She has also found the strength to move on with her life; up to a few weeks ago, everything in Fiona's bedroom was as she left it.

"I couldn't face giving away her clothes. But then I thought if a family could give me their loved one's organ when they died, why was I so slow to give clothes away.

"It made me think and I am happy now that someone will benefit from them", says Teresa, who donated the clothes to a charity shop.

"When Fiona died it didn't really hit me for a while but since the  surgery not a minute of the day goes by when I don't think of her".

She is grateful to the support that Richie, the boys and herself received from everyone in the last number of years, including her GP, Dr. Ivor Hanrahan, in Tipperary town, whom she describes as "a tower of strength".

"When you think of a problem with your liver you automatically think your life is finished, but it's not. You are never alone on the journey".

Most of all, however, she will be eternally grateful to the organ donor who saved her life.