Yet another dead horse discovered in the Clonmel area 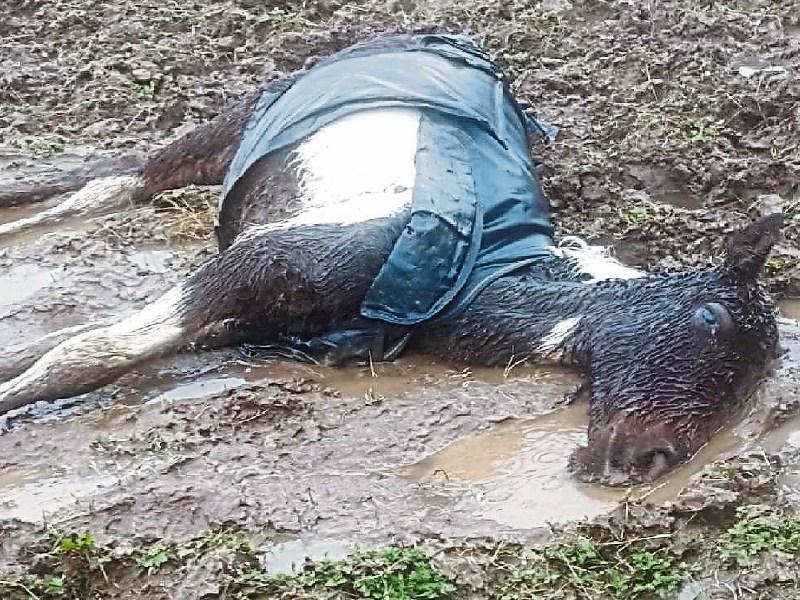 This dead horse was found in a field at Rathronan, near Clonmel, on Friday morning

Another dead horse has been found in the Clonmel area, the second such discovery in three days.

The latest death, in a field at Rathronan, a couple of miles outside the town on the Fethard road, was discovered at 8am this morning, Friday.

District Mayor Catherine Carey went to the scene and saw the dead horse lying in a pool of water in a waterlogged field, with other horses standing nearby.

"This is happening nearly every day but nothing is being done about it", said an emotional Cllr. Carey.

"It's being brushed under the carpet but I can't stand by and watch this animal cruelty continue".

She is angry that appeals to the Department of Agriculture, Food and the Marine for the appointment of a horse warden in Tipperary have so far fallen on deaf ears.

"We have traffic wardens and litter wardens, but the pain and suffering that these animals are enduring isn't being addressed.

"What kind of people have we running the country? How many more animals have to suffer", she asked.

"When a horse falls down and dies it has been suffering for a long time before that happens". Above - More horses in the field at Rathronan, Clonmel, where a dead horse was discovered on Friday morning

The latest animal deaths have occurred just over a week since more than 250 people took to the streets of Clonmel in a protest march that culminated with letters delivered to the County Council calling for the appointment of a horse warden in Tipperary.

The march, organised by the Action for Animal Welfare group, followed a spate of horse deaths in South Tipperary in recent months.

Cllr. Carey said that Tipperary was synonymous with the horse industry but all these cases were harming that reputation.

"These horses are dropping down dead and nobody is taking any responsibility", she said.

Another dead horse was found on the road between Barne and Knocklofty, a few miles west of Clonmel, on Wednesday afternoon.

It appears the horse collapsed in the middle of the roadway and the sulky it was pulling was removed, while the owner left the scene.

"I’m completely disillusioned,” she said, just days after so many people “came out and tried to do something”.

A horse warden would be a step in the right direction, as there needs to be a dedicated authority, she said.

“That poor, misfortunate animal was raced into the ground. The owner took the sulky off and walked away”.

Ms Williamson said she is “forever” e-mailing the Minister for Agriculture, his department and TDs to do something about the care of horses in Tipperary but she is “not even getting answers.”

Now, she says, the issue may have to be dealt with in Europe if the Irish government won’t address it.