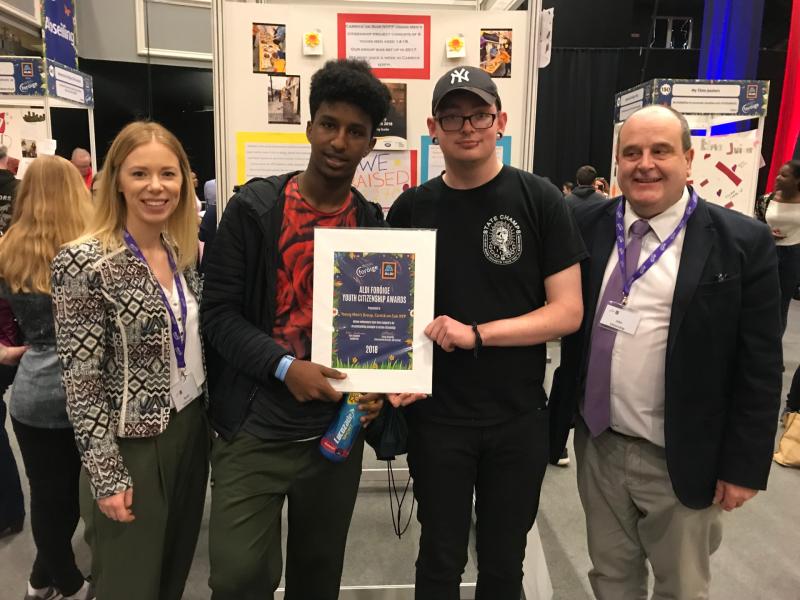 More than 2,000 young people, representing every county in Ireland showcased their community action projects at the Awards, focused on improving the entrants’ local communities in areas such as equality, homelessness, inclusion, community events, mental health, culture and much more.

Commenting at the Awards, Seán Campbell, CEO of Foróige said: “The Aldi Foróige Youth Citizenship Awards programme is designed to empower young people across Ireland to use their skills and talents to make a positive contribution to their local community.”

“The programme involves young people researching the needs of their community, organising practical action in response, evaluating the effectiveness of their work and reflecting on what they’re learning along the way. The projects entered were all about solving social issues in the community for the community.”

“The standard of entry this year was exceptional and we are so proud of all those who took part and everything these young people have achieved in their communities.”

This year was the fourth year Aldi has partnered with Foróige to support the Awards, having recently agreed a new three-year €900,000 partnership extension with the youth organisation.

An equality project to bring positivity to LGBTI+ discussion

Carrick on Suir NYP Our Genderation carried out an equality project to bring positivity to LGBTI+ discussion. The group feel that a lot of the coverage of LGBTI+ issues is negative and emotional so they wanted to bring some positivity to the discussion. They decided to make an awareness video about the positive developments in LGBTI+ issues in Ireland and also filmed some ‘Dear past me’ messages. They hope to promote the film through social media and beyond when it is completed.

A bake sale to raise funds for the Irish Cancer Society

Carrick on Suir NYP Young Men's Group organised a bake sale for the Irish Cancer Society's 'Daffodil Day'. The group chose this project because many of them personally knew people who had been affected by cancer, and they wanted to give something back. The young people promoted the bake sale by handing out posters in the locality, and through social media. The community responded to the group, and they raised €270 for the Irish Cancer Society.

A booklet of positive thoughts to help make people smile

The Piper Girls Group wanted to bring some positivity to their area and decided to compile a booklet of inspirational quotes. The group compiled their favourite quotes which they researched online and designed the booklet. The members got their booklets printed and distributed them in their Foróige Club and the local Arts Centre.

A Halloween fun night for the community

Nenagh Youth Council ran a Halloween fun night for the community so that they could socialise in a safe environment. The event involved fun Halloween games and activities such as face painting, mask making and a fancy dress competition. They showed the movie "The Nightmare before Christmas" which was supervised by project staff and volunteers. The event was a great success enjoyed by all.

An information stand for young people in the area

The DEN Girls wanted to provide an information stand for the young people of the area so that they would know what supports are available to them. The group contacted organisations which they felt would be useful to include information about and requested posters and leaflets. A prominant position was chosen in the local youth space and the information stand was established.

A collaborative project to create a community garden