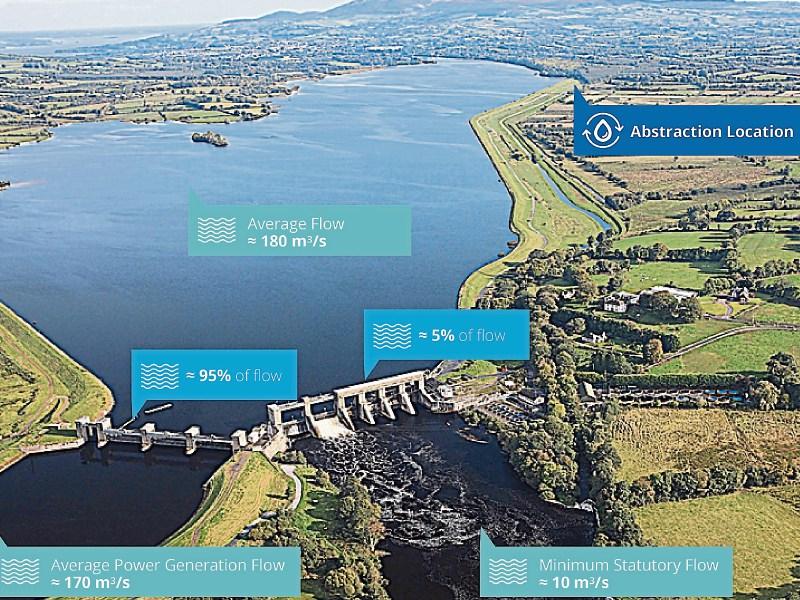 Opponents of Irish Water's plan to pump 330 million litres per day from Parteen basin to Dublin have challenged the State agency's claim that it will take only 2 per cent of the water available at Parteen.

Irish Water recently made known its preferred route for the €1.2bn project which will see a 170km pipe being laid from below Lough Derg to bring water to a new reservoir outside Dublin that will serve the East Coast and Midlands counties.

The agency is due to lodge its planning application for the proposal next year.

Among its claims is that only 2 per cent of the water stored at Parteen Basin will be siphoned off to serve the Greater Dublin Area.

But the Shannon protection Alliance has relased figures claimig this to be misleading.

This 2 per cent figure is based on their assumption of an average inflow to Lough Derg, the group said in a statement this week.

“Unfortunately the inflow can fluctuate during the year,  and does not obey the law of average.  Pumping will have to take cognisance of the actual amount of water available in real time, at any time of the year’, and their pumping strategy should not be based on an “average” flow or level,” they said.

The alliance pointed out that Irish Water keep stating that the amount they will abstract will be taken out of the ESB quota for power generation.

But the alliance says that, at present, during low rainfall or dry periods ESB draw down water from Lough Allen and Lough Ree to maintain a static level in Lough Derg as required to maintain the integrity of the banks north of Portumna, south of Killaloe to Parteen and along the headrace canal to Ardnacrusha Generating Station.

“This is a fact that Irish Water appears to ignore in all of their assumptions to date,” said the alliance.

Figures released by the alliance show that flows into Lough Derg in high flow (winter flood) period, should not cause a problem in Lough Derg or upstream of Lough Derg.

However, at low flow (low rainfall or dry summer) period, flows into Lough Derg will require draw down from Lough Allen and Lough Ree to provide sufficient water for generation and abstraction, and maintain the required level in Lough Derg.

“The alternative is to turn off the ESB turbines,” they say.

This deficit can only be made up by drawing down water from Lough Allen and/or Lough Ree, at a time (summer & autumn) when rainfall is low, and water levels are low, but demand in Dublin is high.

“This situation will have serious consequences for the ecology, and navigation levels in the Shannon system upstream of Meelick Weir,” say the alliance.

They say that real time monitoring and management of the levels all the way to Lough Allen were required even at present, and should be “absolutely mandatory” if this project is allowed to go ahead.

To date, ESB has reduced generation, and / or has drawn down water from as far upstream as Lough Allen to maintain the critical level of Lough Derg, with the consequent reduction in navigation levels in the lake and river sections along the way.

“Our experience of low navigation levels each year during the dry period as the ESB draw down the water on Lough Ree give us reason for concern that this situation will get worse if this project is allowed to proceed,” said the alliance statement