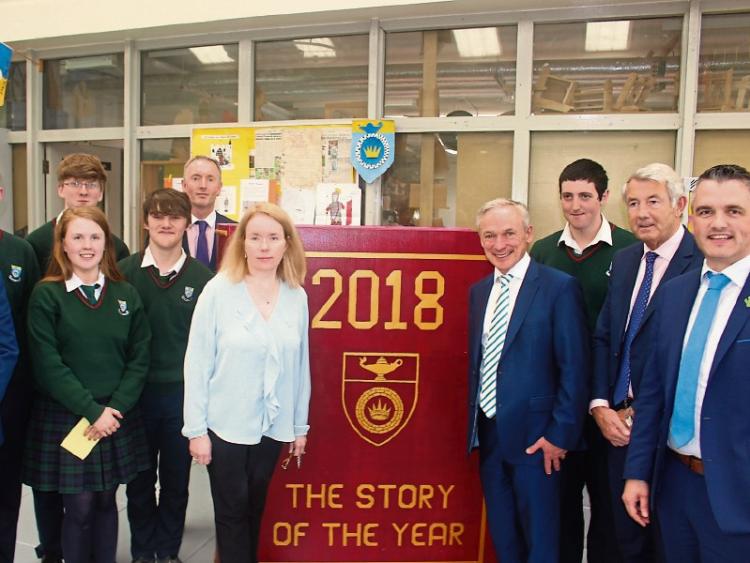 Cashel Community School welcomed the Minister for Education Mr Richard Bruton into its school community on Friday, May 18th.

The Minister was greeted by members of the Students’ Council Orla Lacey, Conor Dwan and the Principal Mr Gallagher.

The welcoming party also comprised the Deputy Principal Ms Margaret Moore, Chairman of the Board of Management Cllr Roger Kennedy and other members of the Board.

In his address the Minister highlighted the pace of technological change which challenges all involved in education. He cited Ireland’s very high ranking in international league tables and he acknowledged the huge amount of progress made in delivering curriculum reform.

On arrival into the school entrance a chorus of music provided the perfect backdrop to the Minister’s first order of the visit as he examined the many aspects of the students work created over the academic year. The Minister and his extended entourage which comprised of Garrety Ahearn, Michael Lowry TD, Mattie McGrath TD, Councillor Mary Hanna Hourigan and Declan Burgess were escorted to the cauldron of the school’s sports hall and were welcomed by all the students and staff of the school.

The Principal Mr Gallagher formally welcomed the Minister and treated him to a brief history of the school’s rich history, informing him that Cashel Community School opened its doors to students for the first time on Monday, 5th September 1994. This was the culmination of a ten-year campaign seeking the best possible school facilities for the young people of Cashel and its hinterland. In 1984 a Community School, involving the amalgamation of the three existing post-primary schools was decreed for Cashel.

The intention was to replace the three relatively small schools with one which would provide a comprehensive system of education. For each school this meant the end of a long tradition of outstanding education. The management bodies of each school – Presentation Sisters Scoil Mhuire, Christian Brothers Secondary, and Vocational School – agreed to the amalgamation. Mr Gallagher was keen to express that while awaiting the building of the new school, the existing school staffs engaged in collaboration at subject department level, sharing teaching programmes and professional expertise. The parents’ councils also took an active hand in promoting the concept of a community school among the local population. Mr Gallagher stressed that “since the amalgamation of the three second level schools in Cashel in 1994, Cashel Community School has been at the core of the life of the community and education in Cashel and surrounding areas. The school has fused the best traditions of the three amalgamated schools and has embarked on building a history.”He continued by declaring that “this must be very proud day for the Minister as he gets the opportunity to witness the fruits of his Departments labour on the ground”. Mr Gallagher paid tribute to the educationalist who back in 1960 first aspired to the concept of a community school, a co-educational education in partnership with the community. He stated that Cashel Community School had fused the best traditions of the three amalgamated schools, where our young citizens receive a student-centric, values-based education designed to enable all students to realise their full potential in a warm secure learning environment.

The Principal described that Cashel Community School “as a flagship for the post primary co-education model” where students can access a rapidly expanding curriculum from which they may choose a wide variety of subjects, both practical and academic, delivered by a dedicated and highly motivated staff. He also acknowledged the fantastic work of previous Boards of Management, school managements, staff and a dynamic Parents’ Association that encourages all parents to participate in and support the activities of the school. Mr Gallagher informed the Minister that “we are the victims of our own success” he continued to outline that the school has grown with the community over its lifetime.

Mr. Gallagher outlined that the structure was initially designed to cater for 500 students, however over its initial years student numbers quickly grew and required an extension which housed six new classrooms with no additional accommodation for services or internal recreational areas. Today our current enrolment stands at 838 (445 Boys and 393 Girls) with a projected enrolment of 855 next year. The demand far exceeds the capacity of the building.

He said the school is the largest in Tipperary and if the school is to hold true to its vision and honour inclusion then the current applications forwarded to the Building section of the Minister’s Department seeking additional accommodation needs attention and approval to ensure we fulfil the promises given to the parents who have entrusted the school with their children’s moral, social and academic education.

Finally Mr Gallagher declared that “our school requires investment to afford us the capacity to provide an adequate learning environment which this community deserves into the future” and urged the Minister and his Department to give the school’s request for additional accommodation his attention. Minister Bruton then addressed the school assembly. He thanked the Board of Management, Staff and Parents, whilst acknowledging the privilege of witnessing the work and efforts of staff both inside and outside the classroom.

The Minister praised the staff for their extraordinary commitment to their students. He continued by highlighting the pace of technological change which challenges all involved in education. He cited Ireland’s very high ranking in international league tables and he acknowledged the huge amount of progress made in delivering curriculum reform.