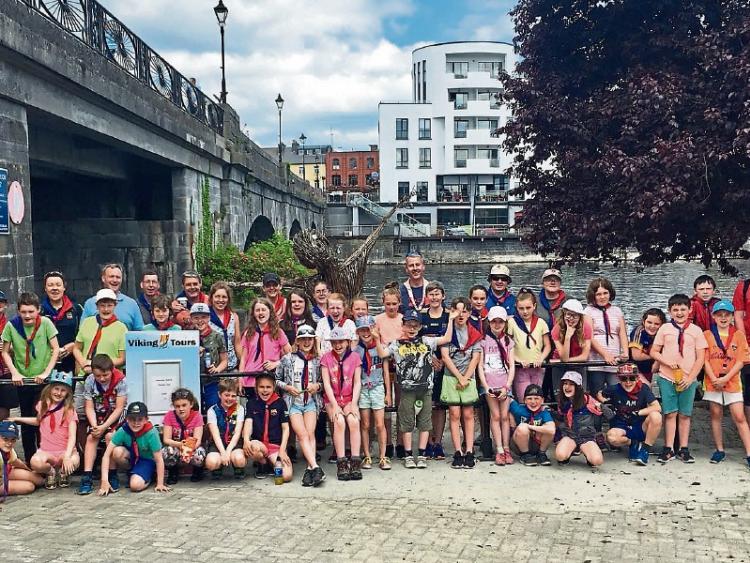 On Friday 1st June 2018 Roscrea cubs (Tuesday and Thursday Sections) set off on their journey to Portlick Scout campsite near Glassan outside Athlone on the river Shannon, writes 11-year-old Alison Crofton.

The craic on the bus was great and the leaders said we were very loud.

We were taking part in “Viking Jam” with over 700 cubs from scout troops all over Ireland. We arrived and helped to set up the camp ( the leaders had pitched the heavy tents thankfully!) and then went to explore the campsite before the opening ceremony. Camp Chief John welcomed us all and showed us how the sub camps worked. We were the “Ravens” for the weekend. We had some supper of soup and pot noodles and got to buy some sweets at the tuck shop before going to bed. Not much sleep was had in our tent as we chatted for hours!

Saturday we had an early start for breakfast as the morning programme started at 9am where we did field sports and camp craft followed by kayaking on the Shannon and the waterslide which the leaders enjoyed too. We had dinner of chicken curry / sweet and sour and had a cool campfire down at the river shore at night where we saw a show by fire breathers. We were so tired that we DID sleep that night.

On Sunday we were so tired in the morning that we nearly got lost doing the orienteering course after our arts & crafts session and we got to fly a virtual plane.

After lunch we went by bus to Hodson bay to get the Viking boat trip along the Shannon. It was so hot that Seamus bought us all icecreams. Yum! The boat took us up the river Shannon to Athlone Castle where we got a cool tour which was very interesting.

Back to camp then for dinner of Spaghetti Bolognaise and then our turn to dress up as Vikings for the Viking parade. Each group then had to perform a 10 minute spot on stage for the talent show. We sang and danced a few pieces with Josh doing a deadly poem and we won 1st place overall- Go Roscrea !

The next morning it was a fry up for breakfast before cleaning out our tents, packing our gear, saying goodbye at the closing ceremony where the Irish and scout flags were lowered.

The bus arrived and took us to McDonalds for lunch. Then the bus took us back to Roscrea where 40 tired but happy cubs unpacked the trailer of gear and tents, thanked our leaders and went home to crash for the rest of the day- well, except a few of us who had an hour before going to play a camogie match for Roscrea- then double crash out. This was my last cub camp as I move to the scout section next year but I had a great time with my friends.