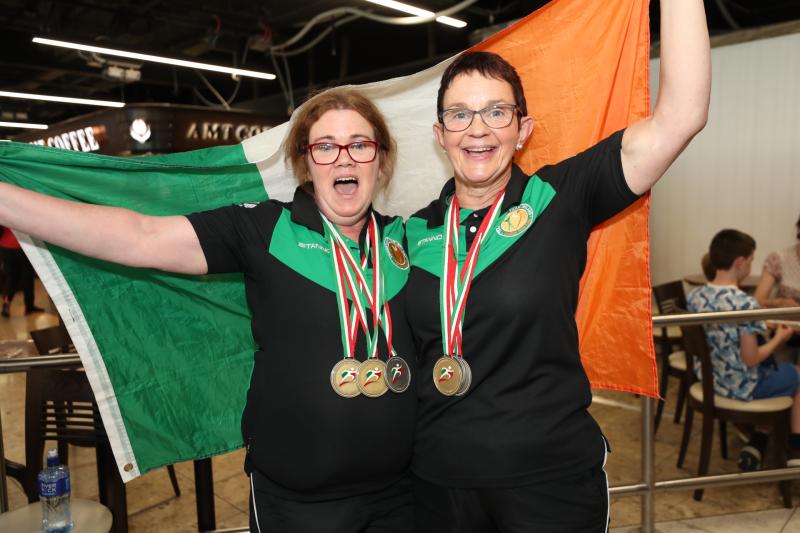 It was  a triumphant week for Transplant Team Ireland at the 10th European Transplant & Dialysis Championships in Cagliari as they won a staggering 54 medals including 11 Gold, 20 silver, 23 Bronze. A large turnout of family friends and supporters turned out to meet the team when they come through the Arrivals’ Hall at Dublin airport’s Terminal One on Sunday.

Twenty three members of Team Ireland, including 10 women and 13 men, who range in age from 31 to 80, competed in intense heat and against strong competition this week on the sun drenched picturesque Italian island of Sardinia.  The positive spirit of the Irish shone through among the 25 competing nations.

Triathlete Sheila Gregan from Nenagh continued in her streak of success winning a Silver medal in the 5km race and a second silver in the 50m freestyle swimming event coming in the same race ahead of fellow teammate Orla Hogan, also from Nenagh, who won a Bronze medal.

Sheila Gregan, a kidney transplant recipient said, “This is my favourite discipline. I’ve been training with Nenagh masters this year. There was very tough competition in the pool as there was mixed age categories so it makes the achievement all the more special. I’m forever grateful for my donor and their family. I’m so proud to be swimming for my country. It’s a great honour.”

At the Games athletes acknowledged their gratitude to their donors. The Games are a celebration of life and showcase the value of sport and regular physical activity for people on dialysis and transplant recipients. The Irish Golf Team of five swept the decks winning 3 Gold and 2 Silver medals.  Eldest Team Ireland member and eldest competitor overall at this year's Championships, John Mc Aleer (from Newtownabbey, Antrim) was one of these successful Golfers, taking the Silver for his net score. A day before the retired university lecturer won a Bronze medal in Petanque event. John, a retired university lecturer, was also given a special recognition award at the closing ceremony gala dinner for his most senior competitor status. Games Veteran Charlie Ryan, a liver transplant recipient from Cobh, Co. Cork retained his decade-long title as European Transplant & Dialysis Champion in Darts, winning Gold. Charlie, a retired skipper, who competed in the 70+ age category defended and won his six in a row Champion Darts title having won Gold at every biennial European games since 2008. Pic: Orla Hogan on the medals podium after winning bronze in Bowling

Team Captain Harry Ward, from Baldoyle, also commented on the team spirit that he witnessed amongst Team Ireland, he said, “I am very proud of how the team has gelled this year. Everyone has supported everyone else and the Team has been like one big family. It’s been a truly fantastic week.”