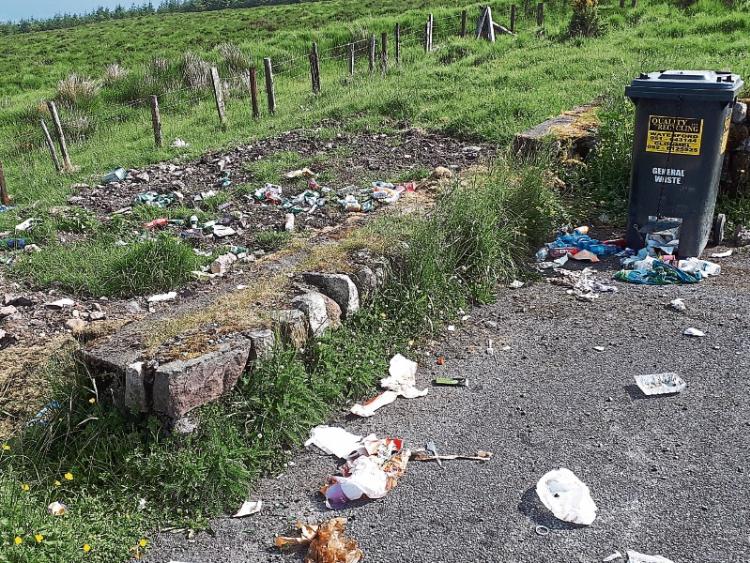 Con Hogan's picture of the illegally dumped rubbish at the lay by in the Comeragh Mountain's above Clonmel.

Two tourists driving in the scenic Comeragh Mountains were dismayed at the filthy state of a beauty spot overlooking Clonmel that has been blighted by illegally dumped rubbish.

Dublin man Con Hogan and the Japanese visitor he was touring with came upon the unsightly dumping on Friday, June 15 when they were driving in the Comeraghs while staying at the award winning Hanora’s Cottage in Ballmacarbry. The rubbish was dumped at a well-known lay by in the mountains with stunning views of the town of Clonmel and valley below.

Mr Hogan was so shocked and embarrased by the rubbish they came upon at this spot that he took photos and sent them to The Nationalist as well as Tipperary and Waterford Co. Councils.

"What an embarrassment," Mr Hogan declared. "It's just shocking to see the beautiful countryside in such a shabby, filthy, polluted and 'couldn't care' state."

He asked what efforts the local authority responsible for this area was making to catch and prosecute people illegally dumping in the Comeragh Mountains and also to deter dumping.

He pointed out that if the council can't catch the illegal dumpers why can't it clean up rubbish in scenic areas like this.

Waterford Co. Council responded that it was arranging to clean up the rubbish dumped in this area and pointed out it constantly had people engaged in litter and dumping clean ups.

"Due to the nature of the problem, these resources tend to be concentrated around the urban areas where this problem is more pronounced," said Niall Kane of the Council's Environment Section.

"In addition to the dedicated crews, additional resources from other departments such as roads are employed for cleanups when necessary.  The areas highlighted in this case have had clean ups carried out six times already this year by the local road crews.  This work does take them away from other works such as road repairs etc."

Mr Kane pointed out that Waterford City and County Council also support approximately 80 community clean ups throughout the year, providing such items as gloves and bags, and removing rubbish collected.

He added that Waterford City and County Council do investigate instances of illegal dumping and littering. Where evidence is found, either a litter fine will be issued, or where more serious instances occur, consideration will be given to taking prosecutions. The Council has so far this year issued 118 litter fines.

Read longer version of this story in this week’s printed edition of The Nationalist now in shops.