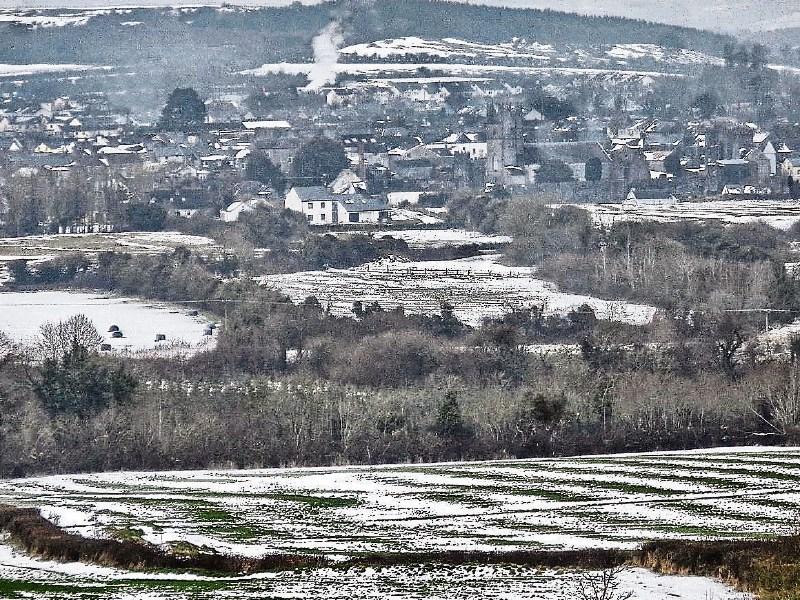 The town of Fethard photographed from Moanbeg this year

Fethard has delighted archaeologists and historians over the past years and it seems that the town’s secrets will keep on revealing themselves. A photo taken earlier this year, from Market Hill appears to show discernible traces of ‘ridge and furrow’ ploughing. The melting snow has revealed the ghost of a pattern that is not normally visible.

Medieval ‘Open Field’ landscapes – which surrounded villages across Europe - were created by a one-sided plough pulled by oxen. The technique resulted in the build-up of ridges of topsoil separated by shallow drainage channels. Excess water flowed away with the gradient of the hillside. Here in Fethard, the flow is south-to-north following the descent of Market Hill from The Commons down towards Moan Beg and to the walled town. Typically, an open field would have been farmed in individual ‘strips’ by the townspeople, with the right to farm a particular strip changing from one to the next every few years - in order to treat everyone fairly. These traces survive into the modern era only where later ploughing has been shallow or the land has long been turned over to grazing.

Fethard is exceptional in Ireland in preserving so much Medieval heritage – not just its spectacular buildings but also its landscape. We still have osier beds along southern banks of the Clashawley beside the playground, from which willow would have been coppiced and then harvested as ‘withies’ for basket-weaving and the making of fish traps and other uses. We have the remains of two mills at the Abymill and the Council depot at the bottom of Watergate Bridge and beyond is the area known as ‘Spitalfield’ – which must have belonged to the Medieval rectors of Fethard who were the hospitallers of the priory-Hospital of St John the Baptist. And behind the Abbey still lie the remains of the friary garth that would have been the home farm of the Augustinians – who are themselves living proof of the continuity that makes Fethard so special.