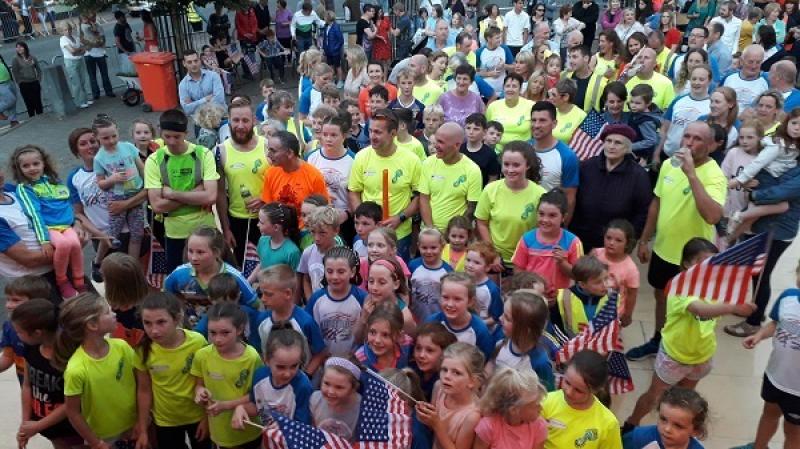 Kathleen Murphy stands in for a photo at Borrisoleigh Track Attack

She was the talk of the coffee shops in Tipperary, the little old lady in her Sunday coat and hat at the finish of the Presidential Track Attack event in Borrisoleigh on July 21.

For the best part of two weeks the Tipperary Star fielded questions about who she was, standing there next to the competitors like the little girl in the red coat in the film Schindler's List.

Many felt that she was from outside Tipperary and had got caught up in the moment during a brief stop in the village, snapped for posterity in Derry O'Donnell's photograph of the event that was published in the Tipperary Star on July 26.

Even Derry himself wasn't aware that she was in the photo until it was pointed out to him.

"I hadn't paid much heed myself. She does stand out all right," said Derry, who put his networking skills to the test and eventually tracked the woman down.

"She is Kathleen Murphy, nee Quinlan, from Glastrigan, Borrisoleigh, and lives in Gortagarry" revealed Derry.

Kathleen is mother-in-law to well-known local businessman Noel Cahill, who runs Mr Sports Gift in Kilkeary, and is married to Martina.

Noel ran the Ballyraggett to Durrow leg of the Presidential Track Attack and was in Borrisoleigh on the night it ended.

"She disappeared and we were wondering where she had gone," he told the Tipperary Star.

He described his mother-in-law as a "bit of a character" who would be well-known throughout Tipperary for her participation in Bingo sessions, with people coming up to her all the time asking how she is keeping.

Kathleen, who is in her 80s, now lives in St Conlon's Nursing Home in Nenagh, "She is as happy as Larry there. She is in great form, as healthy as anything. She regards it as home."

Kathleen, who has seven grandchildren and one great-grandchild, is a cousin of Borrisoleigh native Bishop Thomas Quinlan.

Bishop Quinlan was ordained a priest in 1920 along with three others and was posted to the Han-yang province in China. During his time in China the missionaries were a target for kidnapping and violence.

After returning to Ireland, Fr. Quinlan was posted to Korea, where he was stationed at the outbreak of the Second World War, he was appointed bishop in 1945, serving during the Korean War.

He was captured and imprisoned by the Communists. He was held with Bishop Patrick James Byrne MM, who died, and Bishop Quinlan had to bury him.

He returned to South Korea in 1954 as Regent to the Apostolic Delegation. He retired in 1966 as bishop and died on New Year's Eve 1970.