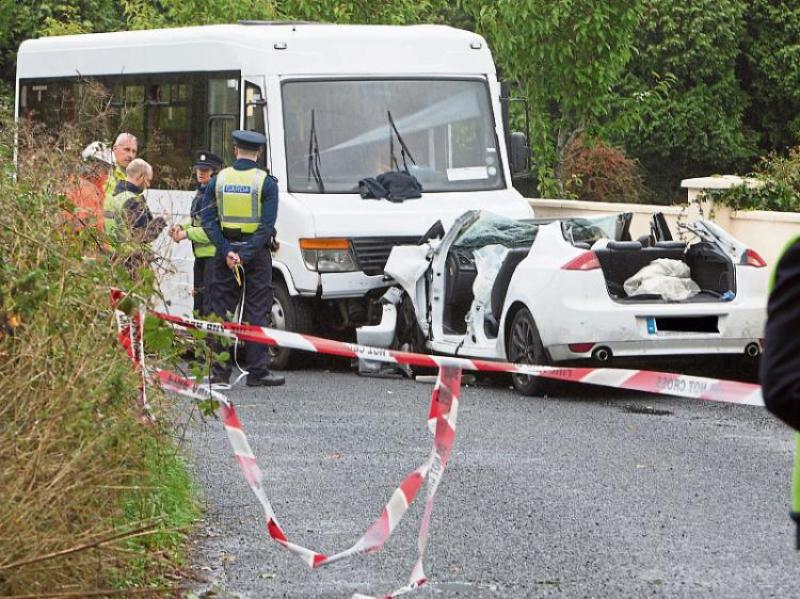 The scene of the collision near Ahane this Thursday morning

Seven students from St Mary's Secondary School in Newport were injured this morning when the school bus they were travelling in collided with a car near Ahane in County Limerick.

The Tipperary Star understands that, while they brought to Limerick to hospital, none of the injuries are life-threatening, but some may have suffered broken bones as well as cuts and bruises.

The bus driver, who is believed to be from Newport, and the driver of the car, were also taken to hospital.

St Mary's principal Kevin  Cusask told the Tipperary Star that they school first became aware of the accident at around 8.10am and their thoughts immediately turned to the well being of the students, their families and all those involved.

He and the school's guidance counsellor attended the scene, where the emergency services had matters under control.

The school then put its critical incident policy in place and the National Educational Psychologist Service was put on standby in case any student needed assistance.

"The staff are to be commended for the way they rallied with support," said Mr Cusack.

He then visited the students in University Hospital Limerick and met parents.

"They were very well taken care off and in relatively good spirits, but shaken," said the principal.

He said some were later discharged while others were kept for observation.

"I want to thank the emergency services," he said. "It was inspiring to see them at work."

He also thanked the staff at UHL for the way they looked after the students.

Mr Cusack said that the school sent its best wishes to the passengers in the other vehicle and the bus driver and wished them a speedy recovery.

The bus would generally have a mix of students from both St Mary's and Newport College, but Clodagh Kelly, principal of Newport College, told the Tipperary Star that none of her school's students were on the bus at the time.

Ms Kelly said that the school had put is student support team in place as students at Newport would know those involved in the accident.

"Our thoughts are with those students injured and both drivers. We wish them a speedy recovery," said Ms Kelly.

The accident happened shortly after 8am when the vehicles collided near Ahane National School, Lisnagry.

According to reports, nine people, including six children, two adults, and a teenager, were taken to hospital.

The reports said that one of the passengers on the bus managed to get out of the vehicle and run a mile to a house to raise the alarm.

Local Tipperary County Council councillor Fiona Bonfield, Newport, said it was fortunate that nobody had suffered serious injury in the accident.

People in the town were shocked when they heard the news, said the Labour Party councillor.

She said her thoughts were with the students, their families, the families of the drivers and the school.