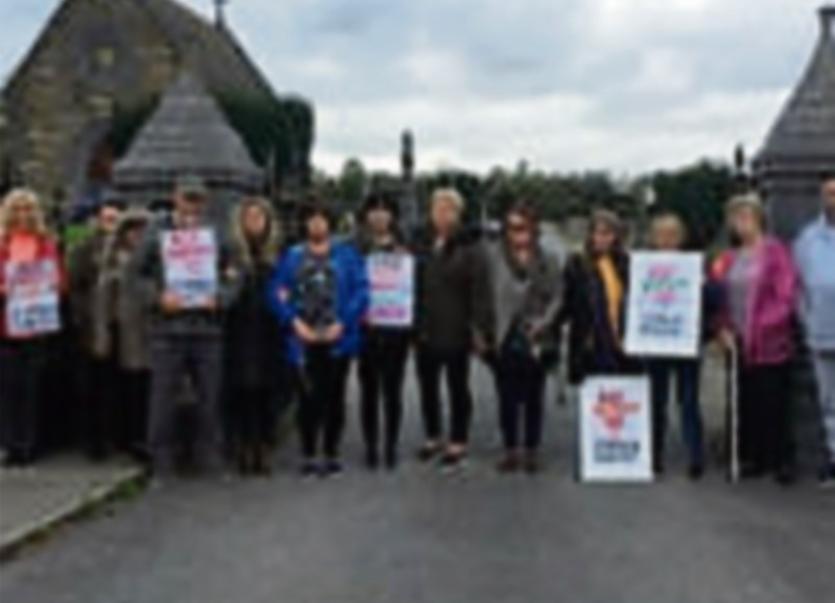 Protesters at the gates of St Patrick's Cemetery in Clonmel this afternoon.

Members of the Friends and Families of St Patrick's Cemetery Group have vowed to sleep in the cemetery overnight if necessary to stop any further work on installing the controversial barriers.

A group of about 20 members of the campaign group, some holding placards declaring "Keep Barriers Out of St Patrick's Cemetery" are currently protesting at the entrance to the Cemetery on Clonmel's Waterford Road. The protest began around lunchtime.

The campaigners were nearing the end of their daily two-hour long morning protest outside the Council offices in Clonmel town centre when word reached them that council staff had started marking out where to erect the barriers at the cemetery.

Anne Marie Whelan of the Friends & Families  of St Patrick's Cemetery Group said the Council staff stopped this work when the protesters arrived.

She criticised the Council for starting work on installing the barriers before a delegation from the Group had an opportunity to argue their case against banning cars from the cemetery at Wednesday's meeting of Clonmel Borough District councillors.

"People are willing to sleep here tonight to stop the work going ahead," she declared.

Clonmel Sinn Fein Cllr Catherine Carey, who took part in the protest, said she was appalled  that the Council has completely overlooked the Friends & Families of St Patrick's Cemetery Group's petition opposing the ban signed by more than 5000 Clonmel people.

The Nationalist has contacted Tipperary Co. Council for a response and is awaiting a reply.