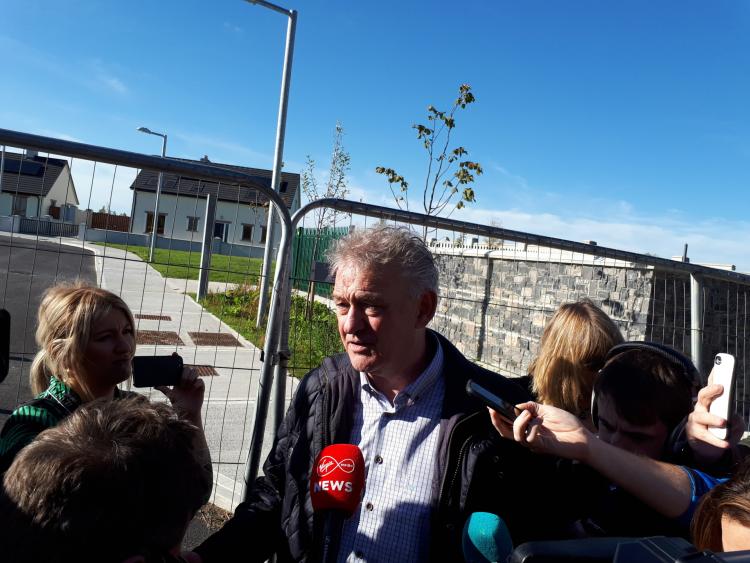 Presidential candidate Peter Casey has announced that he is "taking the weekend off from the campaign to think carefully about whether to continue in the race".

Mr. Casey's announcement follows days of controversy, including a visit to a new housing development at Cabra, Thurles, following which members of the travelling community staged a protest at comments he had made in relation to travellers.

In a statement released this morning, Mr. Casey said "in light of the events of the past few days, I am taking the weekend off from the campaign to think carefully about whether to continue in the race.

"I do not want the people of Ireland to elect me as President of Ireland just based on one statement I made.

"I want to be of service, and make a real difference. I have the expertise and ability to be an influencer. I want to connect people, at home and abroad. I know that my world experience and global views will make me a uniquely suitable candidate for President of Ireland – with drive, ability and energy".

Earlier this week he defended his comments about the up-take of six houses for travellers at Cabra Bridge, Thurles stating that he is not racist, and believes that all people should be treated equally.

The businessman made his way to Thurles amid much media publicity to defend comments he had made about the situation where six homes remain unoccupied at Cabra, Thurles with claims that the travelers were demanding grazing land and stables for their horses.

There was a huge Garda and media presence at the site, and after Mr Casey had departed, a protest took place consisting of  members of the travelling community and their support groups. Mr Casey did not speak with the residents of Cabra Bridge and said that he did not wish to encroach upon their privacy.

Mr Casey, in answering questions from the media, said the he did not accept that people who had lived at Cabra Bridge halting site for four generations, had a right to stay there and he offered the view that he had to be the voice for the majority of the people of Ireland, not just minority groups.

The former dragon on the popular Dragons Den TV show added that there are 1.5 million Irish people living abroad who would love to come home, but they cannot because they cannot afford to purchase homes. However  the six families involved in the Cabra Bridge situation are being offered six homes and they now want stables and land for their horses. "It's mad," he said.

"There is not a racist bone in my body. I believe that everybody is equal to everybody else and we have wonderful people from all over the world in Ireland at the moment. Ireland is a glorious melting pot now," he said.

Mr Casey said that he was unaware of the Cabra Bridge standoff when he came to Tipperary seeking the nomination of Tipperary County Council for the Presidency - a nomination he won. However, when accused of pulling a media stunt by coming to Cabra, he said that he did not want to resolve the issue - that is up to the County Council, he said.

The protest group marched down from the entrance of the halting site across to the entrance to the housing estate. One said that he didn't see any point in Peter Casey coming to Thurles. Carrying banners and slogans they made their way peacefully to the gates and then spoke to the media.

Margaret Carey of the Tipperary Rural Traveller Project  said that even if Mr Casey apologised now for his comments, he still did not represent all the people of Ireland. The homes she said, are fantastic and there is no issue with them. However she did state that the intrusion into the lives of the families had left the children fearful of the media and of Mr Casey.

When questioned about contact between the local authority and the families, representatives of the group said that there had been no direct contact in fifteen months. Contact and dialogue now is between legal teams.

Meanwhile, Cllr David Doran  has said that it is not good enough that representatives of the housing section of Tipperary County Council will not attend the October meeting of the council to answer questions on the impasse. The Sinn Feil councillor called for a special meeting to be held to discuss the matter, but this was refused and officials are to instead attend the November meeting.

"This is a crazy situation and I am calling to have it resolved immediately. I'm disappointed that a special meeting has not been granted and I stand by my comments that if these people do no want the houses, they should be given to people who would love to be housed," Cllr Doran said.