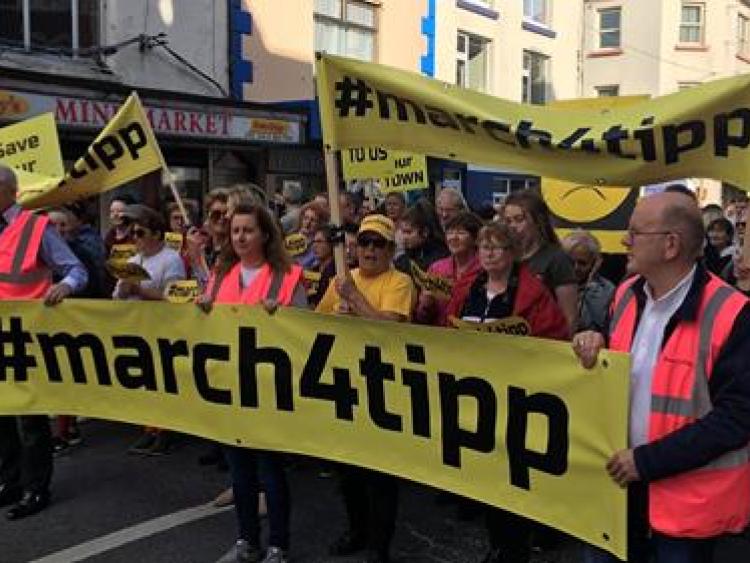 Thousands marched through Tipperary Town today to send out a defiant message to the government highlighting decades of neglect which has destroyed the town.
The town came to a standstill as protestors, young and old, marched through Main Street passing closed shop fronts, an estimated 22 of which closed in recent years, demanding action from government and elected representatives.
Among the march4tipp protestors was Tony Walsh , who gave his life and soul  trying to keep Wellworths open in the town.
Earlier this month Wellworths,an institution in the town, was the latest shop casualty in the town.
"It was devastating for me and my family and all of the staff.Between eight of us working there on the last day we had two hundred and sixty years service between us.It was an horrendous experience" said Tony.
Tony, who spoke out for years about hikes in commercial rates, parking chargesand out of town shopping centres, said "nobody listened".
Aine Quinn said she was marching for her young daughter,she wanted to see jobs and schools that were properly funded in the town.
"Everything is closed in Main Street, it is heartbreaking to see so many places closed" she said.
On Saturday afternoon thousands shouted loud and clear sending out a message to government ministers Regina Doherty and Heather Humphreys who this week when challenged about the jobs shortage in the town said the town was flourishing and that it had stagnated because Tipperary did not have the same collobarative spirit as Limerick.
Organisers threw down the gauntlet to Joe McGrath, Chief Executive Officer of Tipperary County Council setting a two week deadline for action before they would ask people to take to the streets again.They wanted to see action to get rid of pay parking ,a comprehensive business retail plan be drawn up and they wanted DEIS status granted for the primary schools of the town.

Full report in next weeks Nationalist