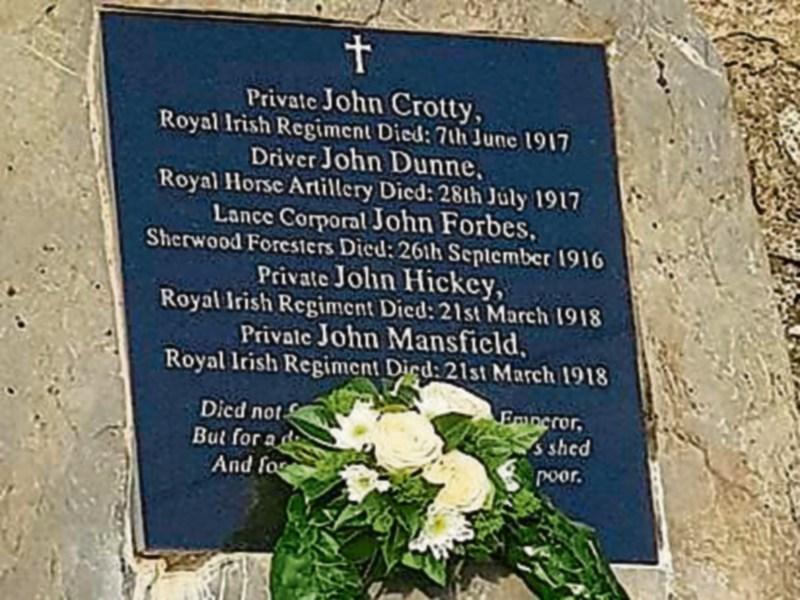 Ceremonies took place throughout Co. Tipperary yesterday (Sunday) to mark the centenary of the end of World War 1 and among them was a commemoration in Newcastle village where up to 80 people gathered to honour five local men who died in the conflict.

Breda Lonergan-Ryan of Newcastle Historical Society said it was still remarkable that for a village as small as Newcastle, so many families were affected by the Great War.

"Today should not be a day to focus on any one point of view or any political side as we are here to remember and appreciate the suffering and sacrifice of all soldiers, nurses and civilians on all sides, in all wars, " she told the ceremony.

She called on all those gathered at the commemoration to take a moment to acknowledge the ultimate sacrifice that all those men and women made for us and future generations.

Poems written by the Great War poets were read and members of Newcastle Church Choir sang hymns and well known songs from the World War 1 era such as It's a Long Way to Tipperary" and Waltzing Matilda.

A wreath was laid at the World War 1 memorial and there was a minute silence observed by the crowd at the stroke of 11am as Newcastle's church bells rang out over the village.

The ceremony concluded with the playing of the Last Post.

Read full report on Newcastle’s Armistice Day commemoration and other commemorations in the county in the printed edition of The Nationalist in shops on Wednesday morning.