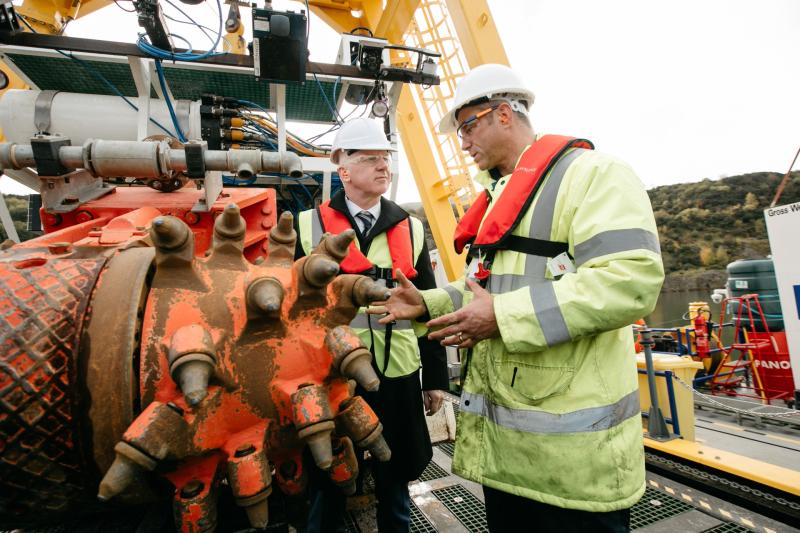 The machine pictured on site at Silvermines.

The robot could unlock €100 billion worth of brownfield, underwater mining sites

An automated underwater robotic vehicle that could revolutionise the mining industry globally has taken the first key steps for the largest private infrastructure project in the history of the State, the Silvermines hydro electric power station in North Tipperary.

The iVAMOS! mining vehicle - a 26.5 tonne robot and associated launch and recovery vessel and roaming AUV - has embarked on underwater testing and real-time analysis of water quality, mineral levels and bathymetry and a study of underwater topography and geotechnical particulars at the Siga Hydro electricity generation station at Silvermines, Nenagh.

The results of the test will feed into the first phase of the Environmental Impact Study for the €650m hydro project which will have the capacity to generate 360MW of electricity – enough for 200,000 households when operational.

The €12.4m study is also doubling as the second of two key trials of the technology – the first conducted in Plymouth in the UK - which has the capacity to unlock €100billion worth of brownfield, underwater mining sites across Europe alone by reopening abandoned mining operations.

Funded by the European Union´s Horizon 2020 research and innovation programme, the technology has the potential to put the EU back on a level playing field in terms of access to strategically important minerals.

The tests on the site now underway involve the exploring mining vehicle, launch and recovery vessel and roving AUV collecting real time positioning and navigational data on the bed of the flooded mine, with a high-tech, shoreline-based control centre delivering real-time analysis of water quality, mineral levels and bathymetrics.

The automated unit has the ability to overcome physical, economic, social, environmental and human constraints that are limiting the exploitation of these resources. It will achieve this by providing a safe clean, low visibility mining technique that will prove the economic viability of extracting existing mineral deposits that are unviable under current mining technology.

When completed, the Silvermines station will generate electricity during high demand periods by water from a higher elevation reservoir being released to a lower reservoir, flowing through giant turbines in the process. It is then pumped back up to the higher reservoir, yet to be constructed, during low electricity demand periods. The lower reservoir already exists by way of a 70m deep flooded open-cast mine at the foot of the Silvermines Mountains.

Speaking at an open day for the iVAMOS! Technology attended by stakeholders and community and public representatives, SIGA Hydro Managing Director Mr. Darren Quinn said the commencement of the tests is a key moment for the project.

“This is effectively the first activity on this site of a commercial nature in a quarter of a century and is a first key step for the project. In running their own trials with this high-tech automated unit, which could reboot the mining industry across Europe, iVAMOS! are able to provide us with key and precise assessment regarding the water quality, ground conditions, rock type, underwater terrain.

“This will underpin the project as the data will be key for us in identifying the level of water treatment that we will have to engage in on the site or if there are major fissures on the bed of this flooded open cast mine and what works will need to be carried out as a result. It’s a very exciting time for us and this data will help validate the project for investors going forward.”

Said Jenny Rainbird (BMT) from iVAMOS! “We are delighted to have this opportunity to trial the iVAMOS! system. We had already conducted tests in the UK and were looking for another site and when we were made aware of this, it was the perfect solution.

“There’s huge mutual benefit from what’s happening here. On the one hand, we needed a testing site and this provides us with exactly the type of site our unit will be deployed at. At the same time, Siga Hydro, as part of their Environmental Impact Study, require exactly the type of analysis that we are providing here in real time. It’s a win-win and we are delighted with the results so far.”