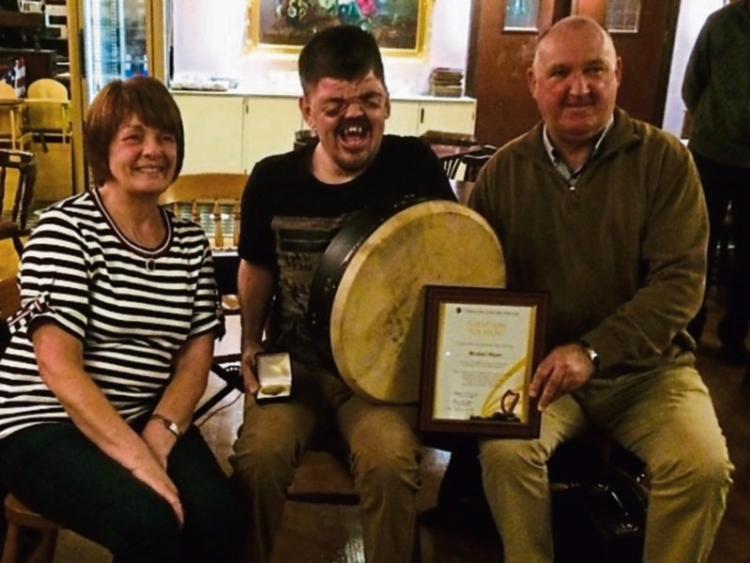 In October, Roscrea Comhaltas were delighted to host an evening in the Whitehouse to present Michael Hayes (Moneygall) with a special medallion and certificate to honour his achievements.

Michael Hayes was born on 17th December 1992, with the bones of his digits fused. Having just one finger and thumb on each hand, this made mobility and self-help skills much more complex. He has no functional vision and has been a service user with NCBI – National Council for the Blind since 1994.

Despite having severely impaired fine motor skills, Michael accomplished the technique of long cane skills. This enabled him to become fully independent in both primary and secondary school. He attended his local mainstream primary school, Scoil Iosaif in Moneygall from 1998-2006. He had a wonderful S.N.A. Anne Maher, and with her continued support he learned mobility training as a part of his daily routine.

Michael got to know the school building and went on his rounds with the roll book every day and eventually managed to take the roll book to all classes independently by using his cane.

In his teenage years, Michael started in St. Josephs CBS Nenagh in 2006.

Michael has attended weekly Bodhrán classes with Tadhg Maher for a number of years now. Tadhg is very proud of Michael and emphasises how Michael really enjoys the classes and has always shown a great sense of commitment to learning the instrument.

Tadgh said: “Michael has a great sense of humour, is extremely caring, and has tackled all challenges with courage and confidence. He has worked diligently at everything he has attempted and has achieved a number of things that many able-bodied people would shy away from”. And so, on an evening in October, after treating a wide circle of proud members of the Hayes family, Comhaltas, and friends to a couple of tunes on the Bodhrán, Michael accepted his certificate and medallion from his teacher Tadhg Maher and Chair of Roscrea Comhaltas Suzanne Costello.

Roscrea Comhaltas would like to congratulate Michael on this fantastic achievement. Michael has shown that with strength and determination, nothing is impossible.