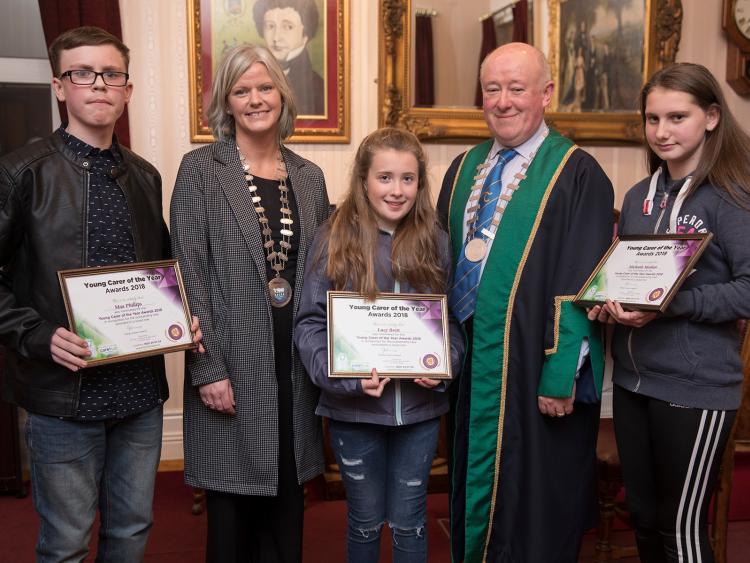 Mayor of the Clonmel Borough District Cllr Richie Molloy praised Glenconnor’s Max Phillips, Ballylooby’s Michaela Meehan and Fethard’s Lucy Brett before presenting them with Young Carer of the Year Awards for 2018. Thurles young carer Sarah Broderick was also a recipient of this year's award, but was absent from the event.

“Tipperary should be very proud to have such fine young people representing its young carers,” Mayor Molloy told Tipperary Live.

“Young carers really go under the radar. There are many young carers throughout the county and across Ireland that generally get very little recognition for the huge role they play.

“Dr Saul Becker, a leading international expert on young carers, estimates that Ireland could have as many as 28,000 young carers aged under 18. This may just be the tip of the iceberg as research undertaken by NUI Galway in 2014, as part of the Health Behaviour in School-Aged Children study, showed that 11.5% of the 10 to 17-year-olds surveyed regularly provided unpaid personal help to a family member.

“Extrapolation from that sample to the national population would suggest that some 56,000 young people in that age group alone provide regular unpaid care,” he added.
13-year-old Clonmel High School student Max Phillips has been caring for his mother, Triona Lyons, the past six years. Triona has type one diabetes and is on dialysis, awaiting a double kidney and pancreas transplant.

“He helps around the house and organises the dialysis room. I often get low blood sugars and he gives me a special injection to bring me around,” Triona said.

“I feel so guilty having Max look after me. He has been doing it since his communion. I can’t walk very far and he won't leave me go for a walk on my own. He is a very caring young boy,” Triona added.

12-year-old Michaela Meehan cares for her 18-year-old wheelchair- using brother, Camron, who has cerebral palsy. Camron also has epilepsy, is partially blind, deaf and dumb, and an asthmatic.

“I am so proud of Michaela. She is terrific for such a young girl,” Michaela and Camron’s mother, Audrey, said.

“She helps with feeding him, changing his nappy and showering him. He has very bad scoliosis and gets cramps in his feet, which makes him cross, so she massages his feet. She lies in beside him in bed  and comforts him when he cries at night. He would be lost without her!

“Before he goes to school in Scoil Aonghusa in the morning, she gives him a kiss on the nose and cheek and it makes him smile. If he has a rough night, she will pinky promise with him to get a good night’s sleep tonight. She takes it upon herself to help him, not because I ask her to do it,” Audrey continued.

Audrey said the award means the world to Michaela. “She is still smiling from ear to ear. She is very soft, kind, caring and good-hearted. She always takes other people’s feelings into consideration. There are so many children out there that help their parents and not a lot of them get recognised for it, so I am absolutely beaming for her,” she added.

“Lucy is always there for Keri no matter what,” Lucy and Keri’s mother, Clodagh Sweeney, said.

“She treats Keri as normal as possible but is extremely protective of her. She goes to bed and stays with Keri until she falls asleep. Lucy can literally do everything I can and chooses to do it herself. She is the kindest, most caring, most beautiful child inside and out that I could have been blessed with,” Clodagh added.