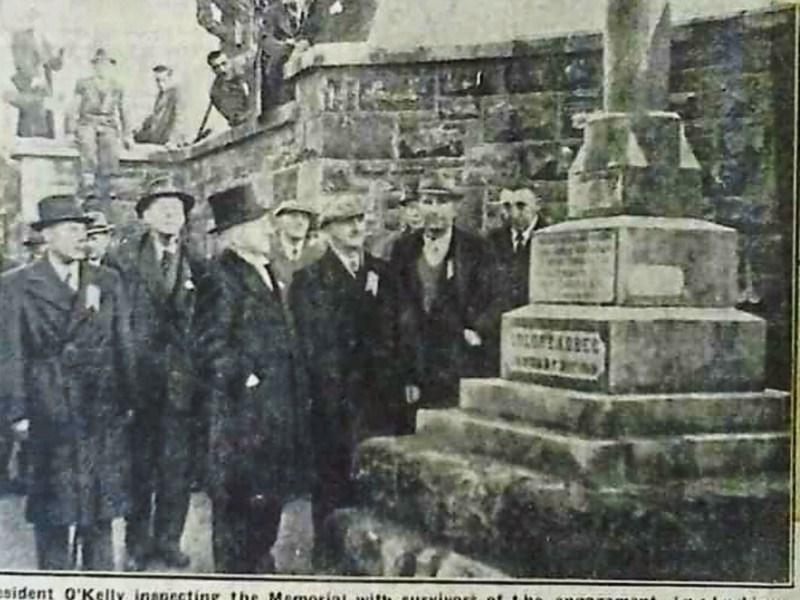 The 100th anniversary of the  Soloheadbeg Ambush, said to be the first action of the War of Independence, will take place in the west Tipperary village this weekend.

The commemoration will take place on Sunday one day in advance of the actual centenary of the ambush itself.

The ambush of the cartload of gelignite by Dan Breen, Sean Treacy and other members of the Third Tipperary Brigade bound for the nearby quarry resulted in the death of two RIC officers, Constable McDonnell and Constable O’Connell.

Soloheadbeg is widely recognised as the first action of the War of Independence.

Josepha Madigan, Minister for Culture, Heritage and the Gaeltacht,  will attend on behalf of the government and will speak  at the commemoration.

The organising committee hope the commemoration will honour the past whilst being an inclusive and dignified occasion.

Family members of all parties involved in the ambush will be in attendance.

A mass of remembrance for all parties involved with the ambush will take place in Solohead church at 11.30am which will be concelebrated by the Archbishop of Cashel and Emly, Kieran O'Reilly.

The formal commemoration programme will commence at Solohead Memorial in Solohead Cross at 12.30pm with recitals from the Charles Kickham Brass Band and the Sean Treacy Pipe Band.

Dr Martin Mansergh is the invited guest of the organising committee.

Dr. Mansergh played a key role in the Northern Ireland peace process and is vice-chair of the government's expert advisory group on the Decade of Centenaries.

Following the laying of wreaths, Dr. Mansergh will unveil a heritage information board at the memorial which gives information on the ambush and directions to ambush site in Soloheadbeg.

He is a former government minister and grandson of the former President of Ireland   Éamon de Valera.

Later in the afternoon the Third Tipperary Brigade Old IRA Commemoration Committee will host a separate event at the ambush which itself which is two miles away from the main memorial in Solohead Cross.

There will be an assembly from 2.30pm at Coffey’s Forge and a parade to the nearby ambush site where there will be wreath laying and an oration by Labhrás Ó Murchú

Solohead Cross is located just off the N24 at Monard on the road between Limerick and Tipperary Town.

Due to the large attendance expected, local access to Solohead Cross is closed from 10am on this Sunday with redirections of traffic in place.

Stewards and Gardaí will be on duty directing cars to the park and ride facility in place from Tipperary Racecourse which is one mile away in Limerick Junction.

All are welcome to attend and the organisers urge those attending to arrive in good time to allow for transfer from Tipperary Racecourse.

Other events are also taking place on this week of the centenary.

There is a history conference in Ballykisteen Hotel on Saturday  on the  impact and legacy of the ambush presented by the Tipperary War of Independence Lecture Series Committee.

An evening of song and stories with Derek Warfield will take place in Bru Boru, Cashel on Saturday whilst Tipperary War of Independence tours are running a bus tour on the on the Monday itself to places of interest associated with the ambush.

There is also an Art Exhibition in Tipperary Town Excel Centre featuring the work of award winning artist Mick O'Dea entitled “Armed Men” which considers the individual and human stories behind the War of Independence.

Meanwhile Tipperary County Council will hold their monthly meeting in Ballykisteen Hotel on Monday to mark the centenary  of the first Dail and to remember the Tipperary TDs elected to the new parliament.