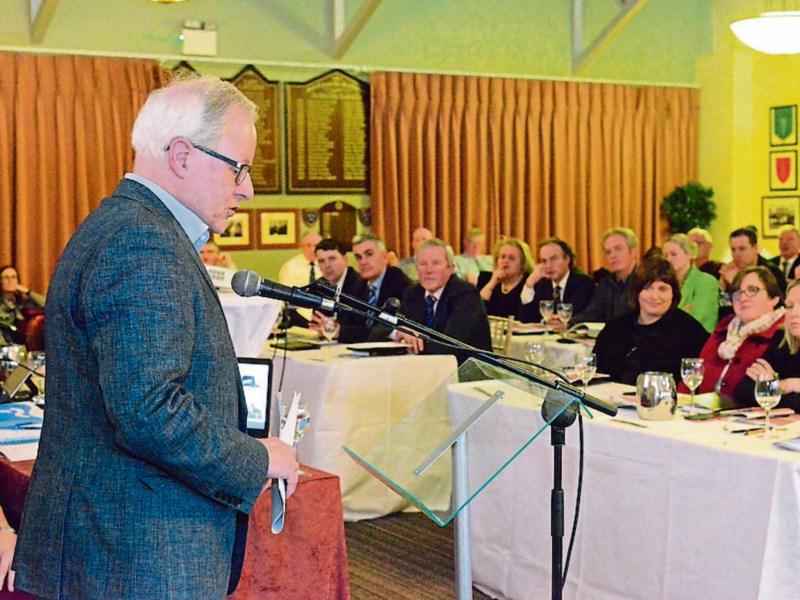 Tipperary County Council marked the first sitting of Dail Eireann one hundred years ago on Monday by holding a special meeting  in honour of  the four Tipperary TDs elected.

Families of the TDs attended a ceremony in Ballykisteen  House Hotel, in the parish of Soloheadbeg, to commemorate the sitting of the first Dail in the Mansion House in Dublin on January 1919.

Proud family members attended the meeting on Monday and heard tributes paid to their ancestors  for the role they played and  accepted  a framed certificate as a momento of the commemoration from council chairman Cllr.Mattie Ryan.

A motion proposing that Tipperary County Council  acknowledge and commemorate the centenary of the first sitting of Dail Eireann  by holding a special meeting in the parish of Soloheadbeg to recognise the contribution of the four Tipperary members elected to the first Dail was unanimously approved by the forty strong members of the council.

Chairman Mattie Ryan, who proposed the motion, said  it was an historic occasion and he welcomed the families of the TDs to the meeting.

Cllr. Michael Murphy,  who seconded the proposal, said that first meeting of the Dail received  worldwide attention  as a result of the declaration   given by democratically  elected representatives.

Cllr. Michael Fitzgerald  said it was fitting that the council should mark the occasion of the  centenary of the first sitting of Dail Eireann   which put the country on the path  which brought us to the present day.

He paid tribute to the organising committee for the celebrations held in Soloheadbeg the day before  to mark the centenary of the events that took place in Soloheadbeg that marked the beginning of the War of Independence.

He described it as a respectful and dignified  ceremony and for that the committee  deserved great praise.

“The message in Soloheadbeg yesterday was one of peace. We should always remember and never forget the past  and the deeds of the people who gave their lives and left us the independence and freedom we enjoy today,” said Cllr. Fitzgerald.

Cllr. Kennedy said all of the people involved in those turbulent  times took brave decisions and   everybody was grateful for the freedom that was enjoyed today.

Cllr. Fiona Bonfield  said it was fitting that  Tipperary

County Council should commemorate the sitting of the first Dail one hundred years ago .

“Today we recognise the contribution of the four Tipperary TDs and we salute and commend their famiies” she said.

Cllr. Martin Browne paid tribute to the council and to the  local committee for organising the commemoration events in Ballykisteen and in Soloheadbeg.

Cllr. Pat English said it was right to remember with pride the role played by  the Tipperary TDs and by the people of Tipperary in the creation “of the Ireland we have today”.

The people of Tipperary had given a mandate against Home rule, it was independence or nothing.

The people of Tipperary were very proud to  have had the opportunity to elect the  four men to the first Dail.

County Council CEO Joe MacGrath  said it was important to remember and reflect on the important events that took place one hundred years ago and he thanked all involved in organising the ceremonies in Sologhead beg and Ballykisteen.