Shock and dismay at felling of trees around Clonmel shopping centre 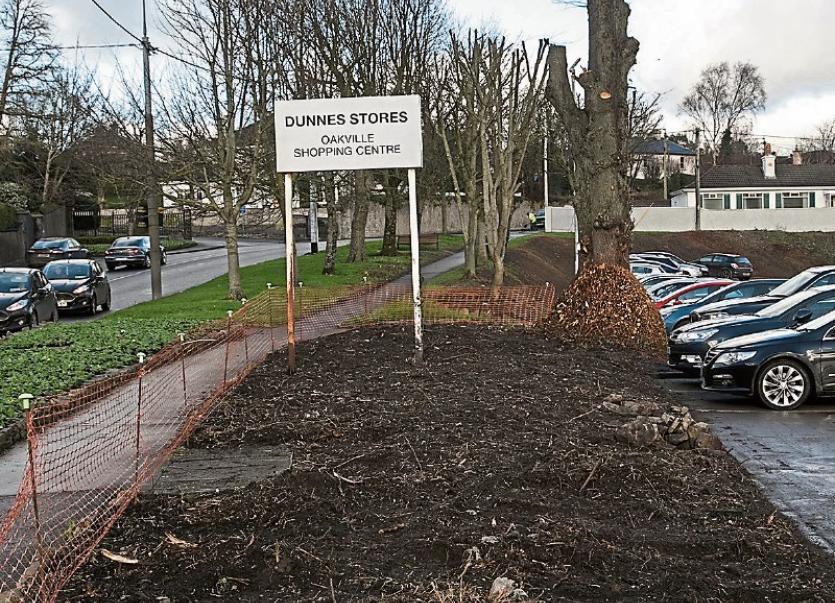 The removal of mature trees and hedging bordering the Oakville Shopping Centre in Clonmel town centre has been roundly criticised by  Clonmel Borough District Mayor and also the retired head gardener of the town's local authority.

The trees and hedging around the perimeter of the Dunne Stores shopping centre were felled last week to the shock and dismay of many people living in the residential areas surrounding it.

One of those residents is Paddy O'Keeffe, retired head gardener of Clonmel Corporation, who has written a strongly worded letter to both Dunnes Stores and the Co. Council.

Mr O'Keeffe says he was involved in planting most of the trees around the Oakville Shopping Centre in the early 1970s and he is "disgusted" at what has happened to the them. Some of the trees along shopping centre's perimeter were even older dating back to the time the property was a private house.

Mr O'Keeffe, who worked with Clonmel Corporation for about 25 years, lives opposite the shopping centre at Melview Lodge and now that the trees and hedging are removed, he says the view of his window is now industrial.

In his letter, he complains that the management of Dunnes Stores has shown disregard to those living in the area as well as those  attending school and working there.

"This area is in all probability one of the most air-polluted areas of Clonmel as it is close to at least two sets of traffic lights where there are many diesel trucks stopping and starting as they deliver to the stores in Oakville."

Mr O'Keeffe wants Dunnes Stores to replant the entire perimeter of Oakville Shopping Centre but points out that it will take another 50 years for the new trees to grow and mature to the level of the old trees.

Mayor of Clonmel Borough District Cllr Richie Molloy said he was amazed at the removal of the trees around Oakville Shopping Centre and has received a lot of complaints from constituents about their removal  in the past week. People, who were environmentally conscious, were very keen that trees in the town centre be retained to mitigate agains the impact of traffic pollution.

He said he wrote a letter to Dunnes Stores at the end of last week highlighting their concerns.

"I said I was writing as the Mayor of Clonmel because people were angry and disappointed  that the trees were cut. The main thing I highlighted was that people felt it was a drastic move to take them down.

“ I called on Dunnes Stores to issue a statement explaining the reasons this was done and to give a commitment to replanting."

Cllr Molloy said he has so far received an email from Dunnes Stores acknowledging receipt of his correspondence but no statement.

The Nationalist also contacted Dunnes Stores head office requesting an explanation but hadn't received a response from the company at the time of going to press yesterday (Tuesday).

Cllr Molloy showed The Nationalist a response a constituent of his received from Dunnes Stores customer services department.

It outlined: "Following a review of planting surrounding out Oakville Shopping Centre in Clonmel, trees were identified as diseased and/or dangerous. As part of the works required a full replanting proposal is scheduled, which will include trees and shrubs."

Clonmel Borough District Administrator Anthony Coleman said the Council has received complaints from the public about the felling of trees at Oakville Shopping Centre and local authority staff had conveyed the public's disappointment at their removal to Dunnes Stores.

He pointed out the Council has been in contact with Dunnes Stores to request the company to inform the local authority of its plans to replant the shopping centre's perimeter.

The Council was waiting to see what those plans were and had requested Dunnes Stores to be mindful of the public's views about the removal of the old trees when devising a replanting scheme for the area.

Mr Coleman said under legislation a company wasn't required to obtain a tree felling licence in cases where trees were deemed to be diseased or posed a potential health and safety risk to the public.

Mr O'Keeffe accused the Council of "carelessness" in not including a protection for local trees in its most recent development plan but Mr Coleman responded that there was a list of "protected" trees in the plan but none of them were located at the Oakville Shopping Centre.

Read also this article about a protest in Fethard over the felling of trees in the town last week. https://www.tipperarylive.ie/news/home/361373/residents-protest-in-fethard-over-council-felling-of-trees-on-towns-streets.html