Doran and Morris attend but say they won’t be joining 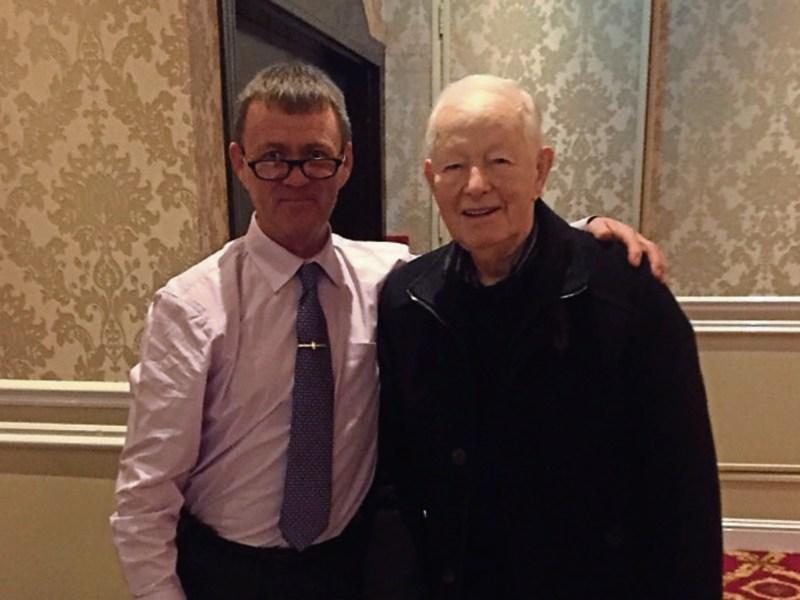 James Morris from Nenagh was the first person to join Aontú at its launch in Nenagh. He is pictured with the party's Munster organiser Finian Toomey

Two former Sinn Fein councillors who attended a meeting in Tipperary last week to launch the Aontú party in the Premier County have both said they are not joining the group.

The meeting attracted about 50 people from throughout North Tipperary.

Afterwards, Cllr Doran said he went in a “listening capacity”, and would not be joining Aontú.

Cllr Morris said he would fight the May local elections as an Independent candidate.

However, Cllr Morris’s 89-year-old father James was the first of 21 people who joined the fledgling party on the night.

His decision cuts the ties on a family relationship with Sinn Féin that goes back decades.

Meanwhile, Deputy Tóibín, who left Sinn Fein over the party’s support for the Repeal the Eight campaign, warned that Ireland was facing a new form of censorship

“If you can’t hold an opinion, you are just one step away from burning books,” he warned. “The level of intolerance is now as bad as it was in the 1950s.”

He also touched on local issues, saying Irish Water’s proposal to bring water from the River Shannon to Dublin was “ludicrous”.

“It’s a new Children’s Hospital,” he said in reference to how its cost had soared from around €600m to over €1.2bn.

“It doesn’t make sense as an investment. Why not bring the jobs and people to Tipperary?”

Deputy Tóibín criticised the lack of regional development saying: “We are seeing it all going to Dublin.”

He also criticised the health services in Tipperary and the reconfiguration of Mid West hospitals under the Hanly Report.

“They shut Nenagh and Limerick is not a centre of excellence,” he said.

Deputy Tóibín urged members to “get involved in local issues”, citing the local hospital and Tipperary Town campaigns as examples. “You need to build political capital so people will trust you,” he said.