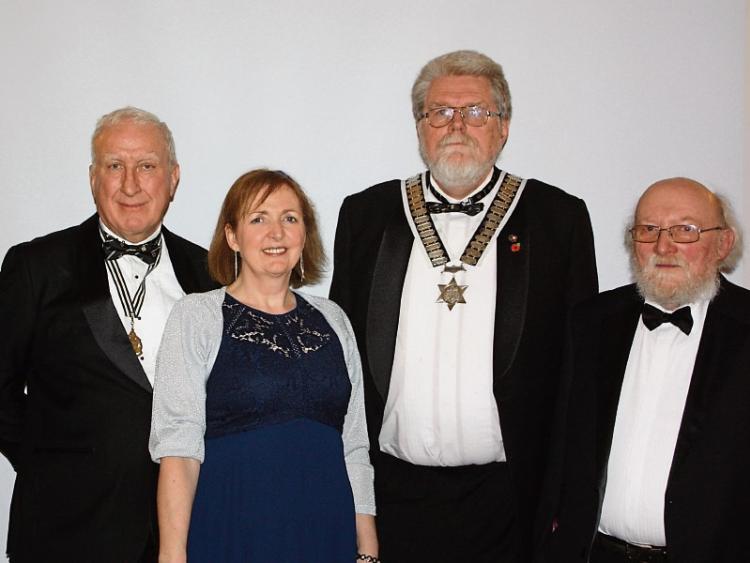 To the background music of ‘it’s a long way to Tipperary’ recorded by Irish Rangers, the past students of Cistercian College Roscrea (CCR) sat down to their annual dinner in St Stephen’s Hibernian Club Dublin last Friday evening with a view to remembering their fellow past men who served in World War 1.

The CCR committee was inspired by the Armistice display last November of the Haunting Soldier sculpture in Stephen's Green to research a forgotten part of the school’s early days'.

Remarkable stories of CCR past men who served in all areas of the armed forces were recounted by after dinner speakers including Sean Boyne, biographer of Captain Emmet Dalton. Dalton, a scratch golfer and past president of CCR Union was with Tom Kettle when he died in the trenches and later became Major General of the Free State army.

Stories were told of past students who served in the Royal Flying Corps (precursor of the RAF), for example, Major Tim Killeen who was shot down by the Red Barron, survived but died in later life of war wounds. Cornelius I. Kelly, Portumna, was shot down over Flanders and was killed, aged 19. His grand niece, Dr Ina Kelly, Tyrellspass, attended the dinner as a guest of the CCR Union and played a slow Irish Air on her Uilleann pipes as a tribute to the past students of CCR who served.

Past students who also served with the Royal Navy with it’s big naval base in Cork, were revealed to an intrigued audience, for example, Patrick Harrington, age 17, home on holidays from Cistercian College, took the place of his mate, who was ill, on board the HM Trawler 'Clifton" but sadly hit a mine shortly after leaving Cork Harbour and was killed.

Some past students were taken as prisoners of war by the German army, such as Henry E. Hall, who, after the war became a leading member of Irish industry and like Emmet Dalton served as president of the CCR Union.

Other survivors went on to have successful lives after the war, such as William Keegan,of Co Laois, who went on to become head of the board of works in Hong Kong.

Sadly there were other casualties, such as Robert and Joseph Cussen from Co Limerick and Patrick Dundon from Limerick City.

Commenting on the commemorative dinner event, chairman of the CCR Union, Dublin Branch, Mr Liam Nicholl, said: “our union has often recognised fellow past men of Cistercian College who served in many different aspects of Irish life and indeed the world at large. It is time that our past students who served in WWI, for whatever their reasons at that time, are now recognised and remembered.”