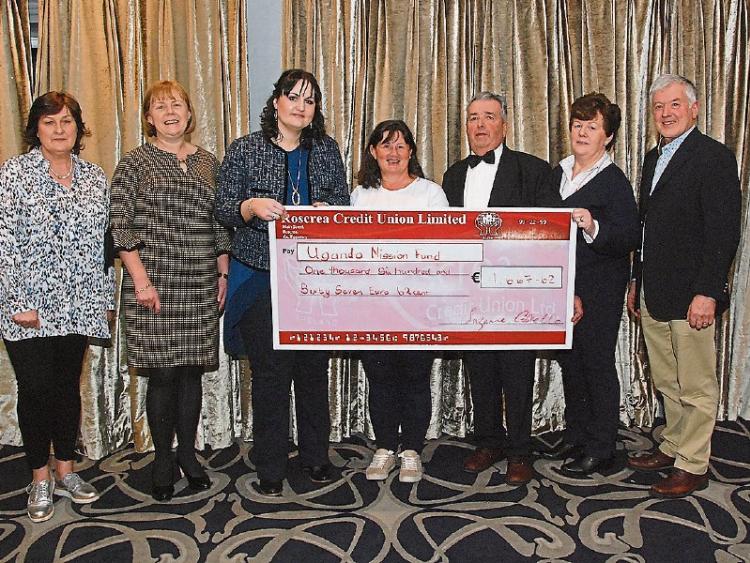 Roscrea Comhaltas would like to thank everyone who braved the elements and joined them in Racket Hall Hotel for their fundraising concert on Sunday last.

It was a fantastic evening of music song and dance, thoroughly enjoyed by all.

This event would not have been possible without the dedication of teachers, musicians, dancers, and singers, who gave freely of their time over the last number of weeks to practice for the event. Thanks also to the many sponsors who donated spot prizes for the monster raffle.

The committee is delighted to announce that the total amount raised on the night was €3,335.24.

All proceeds were divided on the night and have gone directly to the Sr Mona Maher Uganda School Project and Breast Cancer Ireland, each receiving €1,667.62.

The committee was delighted to have Juliette O’Donnell attend on the night on behalf of Breast Cancer Ireland.

Juliette spoke about her own battle with breast cancer and how the funds raised for them would be greatly received.

The charity raises funds for research from charity events, community-based fundraising, campaigns, and support from individuals and companies.

They rely entirely on voluntary contributions and do not receive funding from the government. Juliette went on to speak about Breast Cancer Ireland’s mandate and how in addition to providing funding to support pioneering research, they also provide education and awareness on the importance of breast health amongst women of all ages with a particular focus on younger women.

Their outreach nurses assist in educating young women on the importance of breast health, making them more breast aware and knowing from a younger age, what is and isn’t normal.

If an irregularity is detected, they can be examined early, and the outcome a lot more positive.

Tim Maher (Sr Mona’s brother) acknowledged the great work both his sisters and colleagues have done and continue to do in Uganda. Having travelled to Uganda in the early 70s both Sr Mona and Eileen have lived and worked there ever since, always being involved in education, both formally and informally, believing the empowerment of women and girls would alleviate poverty in family life.

In 2010, when thinking that their time for retirement had come, they were asked to assist in the administration of a new primary boarding school for girls.

Now, nine years later, Coloma School is progressing well and thanks to fundraisers such as this, as well as donations from sponsors, the community of Roscrea and beyond have helped develop Coloma into the great school it is today.