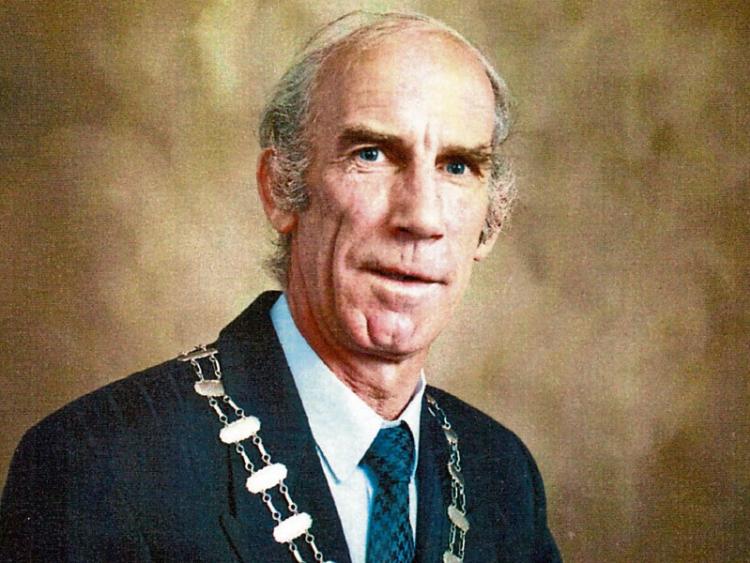 The late Pat Ryan pictured during one of the two occasions he chaired Carrick-on-Suir UDC. Picture Tom Grace

The death of former Carrick-on-Suir Fianna Fail councillor Pat Ryan from O'Mahony Avenue  was greatly mourned in his hometown last week where he was noted as a champion of the underprivileged during his career in local politics.

St Nicholas Church in Carrick-on-Suir was packed to overflowing last Wednesday morning, April 3 for Mr Ryan's funeral mass. It was  a testament to the high esteem in which he was held in the community.

His passing marks the loss of another link to that generation of councillors who represented the people of Carrick-on-Suir on Carrick-on-Suir Urban District Council in the 1980s and 1990s.

Former urban council colleagues and current councillors from Carrick-on-Suir gathered at Carrick-on-Suir Town Hall before the funeral mass last Wednesday to pass a vote of sympathy to Pat Ryan's family and pay tribute to him. The Irish tricolour was flown at half mast outside the Town Hall that day.

Carrickbeg based Patsy Murphy, who along with Pat Ryan was first elected to Carrick UDC in 1985, said  his former colleague w as a great Fianna Fail man, family man and Swan GAA Club man.

He recalled Pat  was a life long member of Fianna Fail and belonged  to the O'Hanlon FF Cumann in Carrick-on-Suir. He first ran for election to the local council in 1979. He  was co-opted to the UDC in January, 1985 and retained his seat in the local elections in June that year.

Pat Ryan was one of four Fianna Fail councillors on the UDC at that time and served as the council's chairman first in 1986 and again in 1992.

He was comfortably re-elected to the UDC in the 1994 local elections and retired from local politics at the end of that council's five year term in 1999.

"Pat was an outspoken councillor and a great man for helping people with housing problems and people who were underprivileged," said Mr Murphy.

Mr Murphy recalled that following the closure of the Tannery in Carrick, unemployment was a big issue in the town in the 1980s and 1990s.  Pat Ryan joined him and other councillors on many deputations to ministers and taoisigh lobbying for more industry and jobs for their hometown.

Carrick-on-Suir FF councillor Kieran Bourke said he knew Pat Ryan all his life and remembers him as a "very straight talker", who was always on the side of the under privileged.

Cllr Bourke said Pat served on South Tipperary Vocational Education Committee during his time on the Urban Council and was always to the forefront in advocating for his hometown.

He recalled Carrick Tannery closed in 1985, the year Pat was first elected to Carrick UDC. Pat had worked in the Tannery and was very involved in trying to get it re-opened and to assist the former workers in the first few months after its closure.

"He would always have made sure people who were entitled to medical cards and social welfare payments were looked after.

"He was a huge critic of the minimum wage and always argued it wasn't good enough.

“He was a man of the people throughout his political life and always tried to represent the down trodden as best he could."