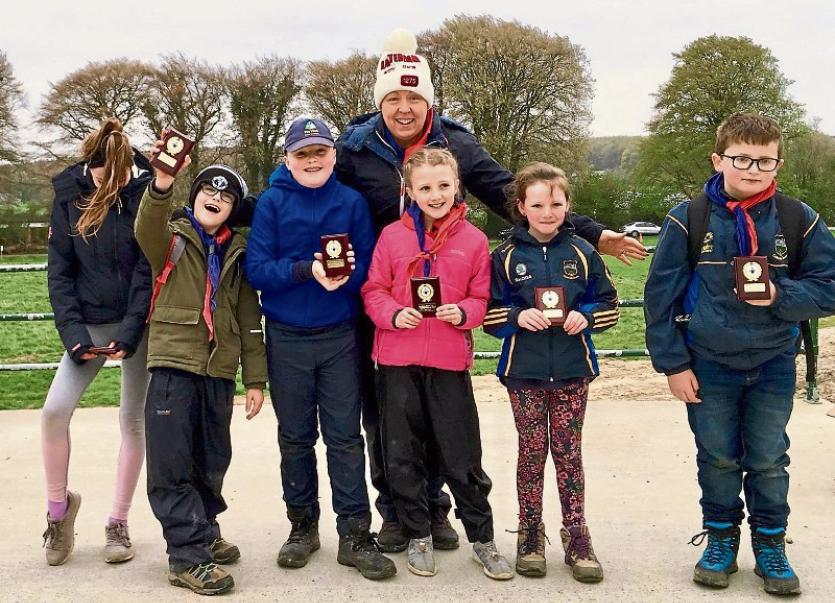 On April 13, fifth class pupil Jeffrey Myles and Shay Hennessy embarked on a journey that they will never forget.

“We competed in the cub county challenge representing Roscrea sixth club. This was held in the Eco Village in Cloughjourdan from 11.30am to 7pm.

“The conditions were horrible, with winds booming like a hurricane and it stayed like that for the seven and half hours that we were there. The toilets were like something from the middle ages. The seat was like a chamber pot with a hole in it going down to a bunch of hay.

“We had to complete six tasks within a timeframe of 45 minutes per task. The first task was ‘leave no trace’.

“After we listened to the Scout leader, we had to answer questions, and we learnt that leave no trace means, making the area where you were in the forest (for example) like you were never there.

“The second task was the outback. We made cookies out of flour, water, honey and chocolate chip in a ziplock bag. Then we mashed it up in the ziplock bag and put them in tin foil. We had to make kindling with a knife.

“We lit the kindling with some cotton wool and some dried shrubs I found through the trails. With a flint and steel, I made a spark. We cooked the cookies over the open fire and waited a few minutes.

“When they were ready we ate them. It was really fun. We moved onto the next task which was pioneering. We had to make a tripod and put a plastic bag on it to make a bin. After that we made a quad pod to make a shelter from the rain. We used a neckie as a flag to mark our territory.

“Then we went to the next challenge. This was a tent building. We had to build a Tortuga tent and we completed it in the fastest time. When we had the tent put up, we went inside for shelter and we asked the Leader to play the harmonica and he did.

“He said we were the fastest to erect the tent and he had nothing to do with putting up the tent.

“Next we went to the orienteering task. We had a map which we had to navigate through a path with clues along the way. We had to count apple trees in the orchard to find the answer. We also had to count bicycle wheels in a Dome and count steps in the amphitheater. Then we went to the final task which was first aid. We had to name medical supplies and complete the recovery position.

“This position is to help someone breathe if they are unconscious. When that was all done, the Leaders announced the winners. We came second out of twelve teams. So we qualified to represent Roscrea sixers in the national competitions. We were so happy.

"I learnt so many things about pioneering, the outback, first aid, and orienteering and leave no trace. We worked really hard but it paid off because of our teamwork and communication with each other because last year we did not have much communication within our team. I am so happy that our team came second and we have qualified for the national competition. It was one of the most memorable days of my life so far.”