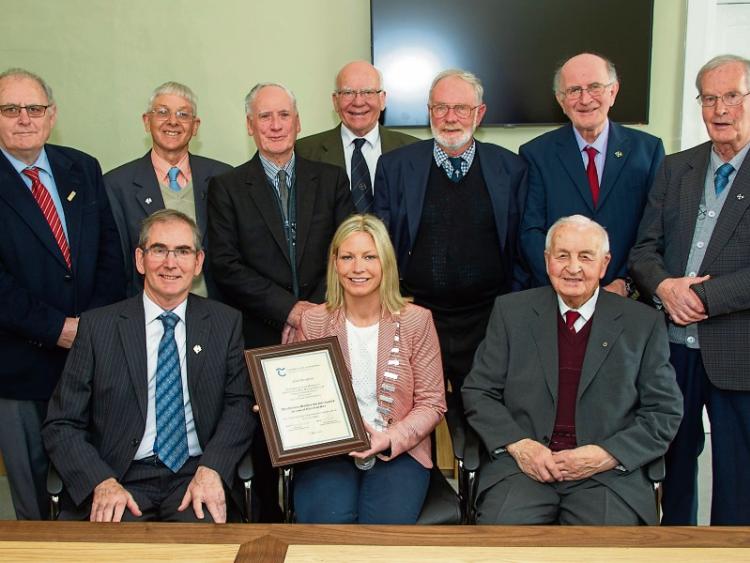 The Christian Brothers' contribution to educating generations of boys from Carrick-on-Suir and its hinterland for more than two centuries was honoured and remembered at a civic reception in Carrick-on-Suir Town Hall last week.

The last three Christian Brothers residing at The Monastery on the Pill Road bade farewell to the town and its people last August following the sale of the property  but they returned  last Wednesday to attend the civic reception accorded by councillors of Carrick-on-Suir Municipal District.

Brothers Seán Ó Dúgáin, Seamus Whelan and Éamonn MacLochlainn were joined at the celebration by other Christian Brothers who lived and taught at  The Monastery Secondary School  and Greenschool and by former lay teachers and past pupils.

It was an occasion to thank the Christian Brothers and look back on their legacy of education in Carrick-on-Suir starting in 1806 when the order's founder Edmund Rice opened his second school  educating poor boys  on the Pill Road. The reception was appropriately hosted during Blessed Edmund Rice Week of Prayer.

Carrick-on-Suir Municipal District Chairperson Cllr Louise McLoughlin presented a framed scroll to the Christian Brothers marking the according of the civic reception and paid tribute to their contribution to education in the town over 200 years.  Carrick-on-Suir's county councillors Cllr Kieran Bourke (FF) and Cllr David Dunne  were past pupils of the town's Christian Brothers schools.

Cllr Bourke said he wished to acknowledge the good men who gave the children of Carrick-on-Suir the opportunity to receive a first-class  class education. "They deserve our admiration and gratitude. Edmund Rice and the order he established left Carrick-on-Suir a legacy of how public service comes in many forms, be it the religious, lay or general community involvement."

Cllr Dunne   paid tribute to the Christian Brothers contribution to promoting sport in Carrick-on-Suir particularly hurling and noted their tradition of education is being carried on today in the town through the two schools they founded.

Former teachers at the Greenschool and Monastery including Tom Nealon, Noel Casey, Bobby Walsh and Michael Ryan fondly recalled with humour and nostalgia their time at the schools and the Christian Brothers they worked alongside.

Tom Nealon, who taught at the Greenschool for 46 years, said the Christian Brothers could have worked in any job or been in any situation in life but they instead  devoted their lives to educating the less well off and serving this town and country.

Ninety-two year-old Johnny Dowley, one of the oldest surviving past pupils of the Greenschool and Monastery, said it was a great pity to say farewell to the Christian Brothers because the contribution they made to Carrick-on-Suir was tremendous and should never be forgotten.

Five students from the recently renamed Edmund Rice Secondary School and the school's new principal Michael Walsh represented the current generation at the civic reception. Mr Walsh said the legacy of tremendous work and spirit of the Christian Brothers will continue in the school forever.

A tribute was also paid by Mairead Bourke, who was involved in courses run at the Bru na Cruinne Cosmology and Spirituality Centre based at the Christian Brothers monastery residence up until  their departure last year. She said the Bru na Cruinne Centre's work was continuing in the town and all the people who attended its courses were very grateful to the Christian Brothers.

Brother Seán Ó Dúgáin gave a detailed account of the history of the foundation of the Christian Brothers Carrick-on-Suir schools.

"This civic reception is simultaneously humbling and exhilarating.  We will cherish the occasion for whatever time the good Lord grants us,” he said.

He thanked the people of the three counties Carrick's Christian Brothers schools served for assimilating the brothers. Now that the Irish section of their order was approaching the sunset of its existence, he said it was nice for them to know they had been of some service to their church, country and hopefully our  planet.