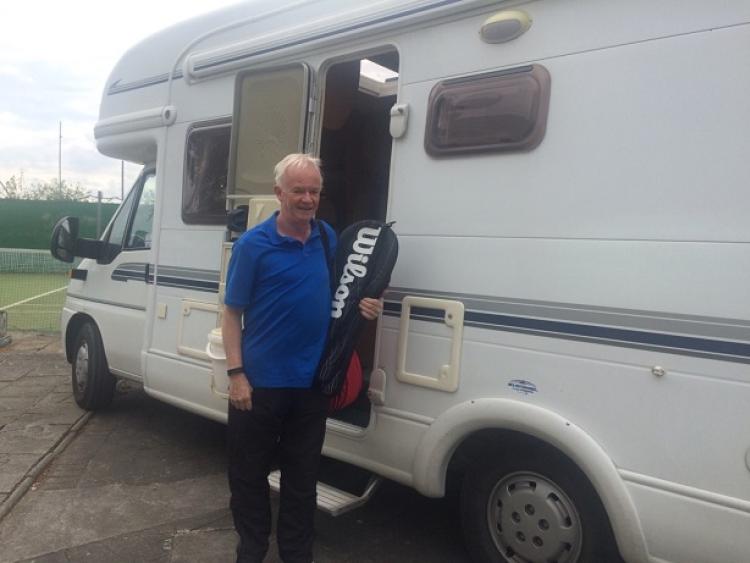 John McNally pictured prior to his departure for Europe

Johnny Mc's blog is going down a treat

Thurles man John McNally began his blog as he toured the European tennis clay championships in his trusted camper van.

The first week of his tour has been eventful as he outlined:

This is the cattle truck I'm taking on day one of the European tennis tour. I'm not on board just jet so can't give any update on the odious odours just yet  However, I'm in a fairly celebrity mode looking at the cars going on board. Aston Martin, Porsche , Lamborghini and the latest electric BMW sports models are all lined up Should be an interesting night at the bar, in a cattle truck surrounded by really well healed dudes with or without the odours.

It doesn't really matter if you're in the KokTiki or a luxury liner, and in this case a bog standard ferry ...... the wind decides whether or not your voyage will be pleasant or not
Setting out from Cork to Santander it was overcast and wet. This was all to change , and I don't mean for the better. This is your captain speaking was followed by "the weather for this voyage is NOT GOOD " ..... and he's hardly going to say it's going to be HORRENDOUS, or all would exit.

Advice to get comfortable was wise -I went to my cabin about an hour into the journey and stayed there for nearly 20 hours. The wind got up going out of Cork harbour and stayed that way for at least 15 hours. A ferry or the smallest dingy are all treated the same, the wind just knocks them about. I'm going to re phrase cattle truck and call it SICK TRUCK. Thankfully I had a comfortable cabin, and an enforced Ramadan from 12 yesterday to 10 today. It was like being on a roller coaster continuously for 15 hours and stuck in a cell during all that time . Up and down up and down it went. It wasn't helped by an announcement from reception that a demonstration on how to put on a life jacket for ALL PASSENGERS was taking place immediately creating visions of Armageddon and end of life on this planet.

I'm not the best ever traveller but like to think I'm getting better through experience....... I'm not really. You can never get used to sea sickness ......... one tip though .......if you don't eat, there's nothing to come up. It's calmed down now as we make our way to Santander in northern Spain and on to Madrid where all the big boys are in action today including Federer, Nadal and Djokovic......... should be fun.  I'm starving though. 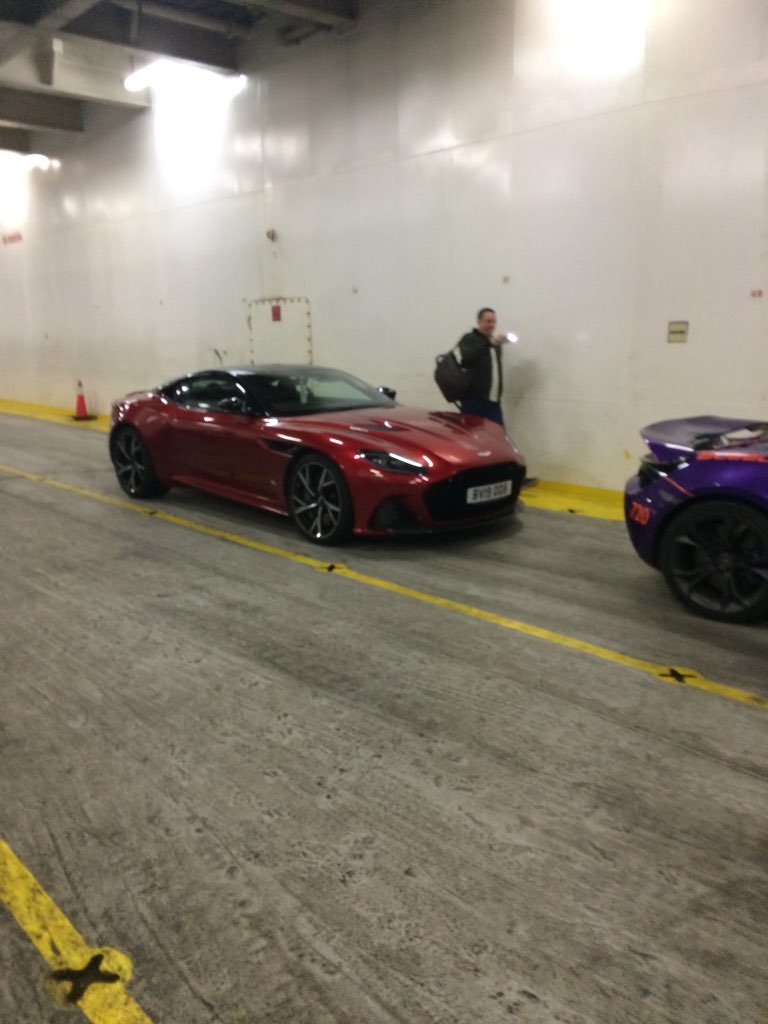 Some of the sports cars on board the ship.

These are some of the cars that were on the ferry ....... the stormy ferry that got in about 6 hours late.  I got to talk to a few of them. All from the North -26 plus the wags so around 50 in all. They're starting in Santander and driving around Portugal and Spain for a week before getting the ferry back to cork. They call it the BUBBLEGUM RUN. worth looking up if you have a Porsche Ferrari Mc Laren or the like. Very ordinary guys I must say , not a bit stuffy and everyone I talked to  want to STAY no BREXIT EERS here
Arrived around 2.30 am in Madrid and heading out to the tennis facility right now. Very exciting.  FEDERER takes on a really hot Thiem later on in what will be a massive match up with the new gen. Stan takes on Tafa for those of you who know your tennis. It's cloudy here but I believe sunshine is on the way. More later

Another Day another dollar

This picture doesn't tell the whole story. It's the inside of the main arena in Madrid where Djokovic was to meet Cilic in match one. Soon after arrival we were told that there was a walkover, thought it was Djokovic who had to pull out , turns out it was Cilic ( a Wimbledon finalist in 2018). Had to settle for one big encounter and this was the Fed v Thiem ( a very worthy opponent ) and a guy having a great season. The result was a crap defeat for the Fed having had two match points . Tickets for the day were € 98 ...... a hearty price for sure, but this world is all about spondoolicks .. ...... make no mistake about that.
Let me give you the good, the bad and the johnny Mc of it all
THE GOOD.  a superb match full of drama and world class tennis. A rare opportunity to see two of the very top players slug it out for over two hours ...... RIVETING
THE BAD ....... venue,  while lovely has a lot of catching up to do to be world class for a start, the food........ I've seen better at an under 4 Longford hurling quarter final in a field full of slurry. These guys need to get their asses to Electric Picnic to learn how to feed a crowd.
The signage ...... a catastrophe. For a stranger coming to a venue with no previous experience of it but having been to two Olympics, numerous Wimbledon's and countless other brilliant sporting events worldwide, it was a tragedy. Have a look at the ticket for example bottom right it says 10 D.  Everyone thought this was their seat. It wasn't ....... so about 100,000 people are mulling around like ants going underground with sticks in their mouths looking for a purpose....... and NOBODY could tell us what the hell this 10 D was for. Getting there ...... not easy. And the scheduling was just .......... say no more. A LONG WAY TO GO ....... MR OR MRS ORGANISERS.
The Johnny MC. ...... met some fab people.  A Spaniard names Maria who was queuing with her client a Swede ......... and who shares my views about pricing and signage etc
One other major factor.  The stadium always looks empty ........  Why ......... because the design is rubbish. All the area around the court have  players boxes .......... they're always EMPTY ( except when the Fed is playing ). Donut more or less always looks empty on TV.  PLEASE NOTE MR ORGANISERS - it's the fans that make the sport ........ more fans please.
Finally.  Through the good offices of my sister Miriam and her pal Barbara ( sister of world renowned umpire Fergus Murphy) I hope to meet said gent tomorrow for a chat and an insight.  Keep watching. 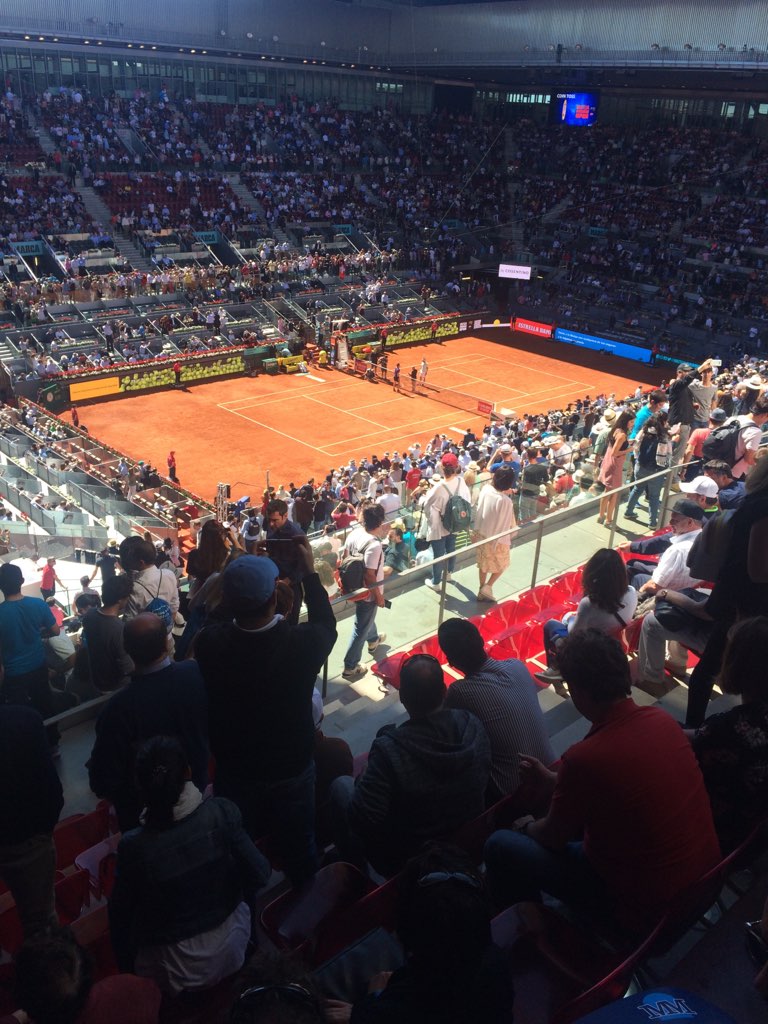 The view from my seat

What a day today at the Madrid open. Djokovic once again proves he's not no 1 because of his looks. Rafa on court taking on the new kid and Greek god Tsitipas ..... saw him practice earlier and was mighty impressed ...... he's good and a big boy too.
After that met Fergus Murphy, Irish professional coach and one of only a few on the circuit. A complete gent doing the night shift tonight in the Nadal match. He's employed as a full time umpire on the circuit so travels around a lot. A few insights:
1) the umpire is in complete control of every match to include the players, all officials, CROWD ( sometimes a massive factor ) and all the scoring, timing hawk eye, to name but a few.
2) In Madrid the roof closes , but only fully or not at all, so it's either open or closed. Players sometimes request it to be closed, the umpire decides
3) Hawk eye on clay ...... some TV networks have it and can sometimes show a variance with the mark made by the ball, umpires rely more on the make made as the definitive eye, and it's accepted by the players. How many knew that !!!!!
4) The boundary between umpire and player is a very important one, they're together on tour but separate on court. Boundary a big consideration here.
5) The coaching rule is interesting....... none allowed for men, allowed for women except at the four majors. Remember Serena at the US who abused the umpire and previously threatened to have one shot ........ an occupational hazard and a difficult one to marshal.
6) It's an immediate decision without much consultation like rugby for instance. Can be a lonely place up in that chair where emotions can run high for players and FANS.
25 years in the job and a top of the range guy, how important is the umpire ?  Consider an orchestra without a conductor ....... they could easily be playing West Side Story while the cast are doing The Sound of Music. An amazing career. Thank you Fergus, Barbara his sister for setting it up and my own sister Miriam for thinking of it and also getting me the meeting. 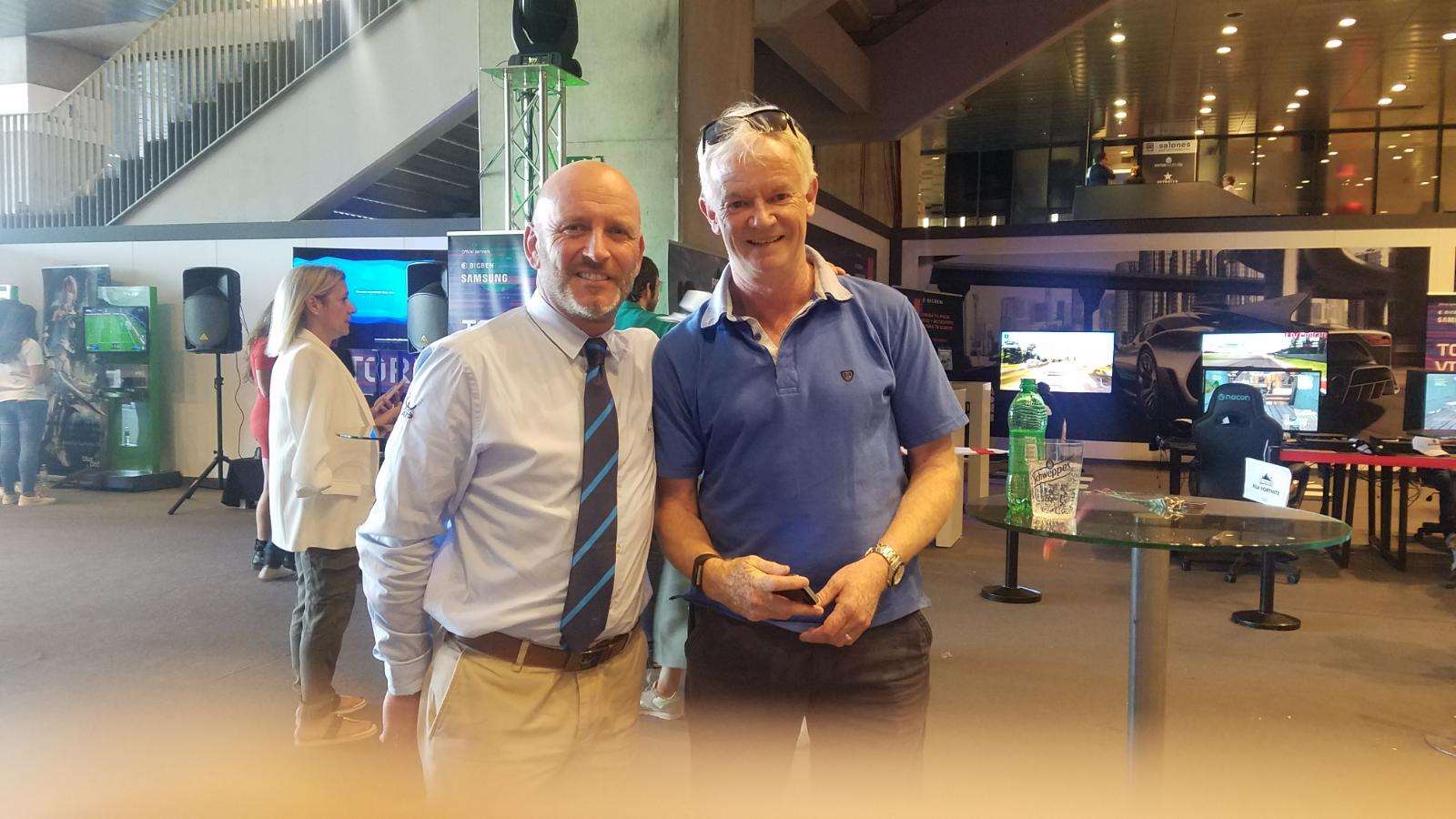