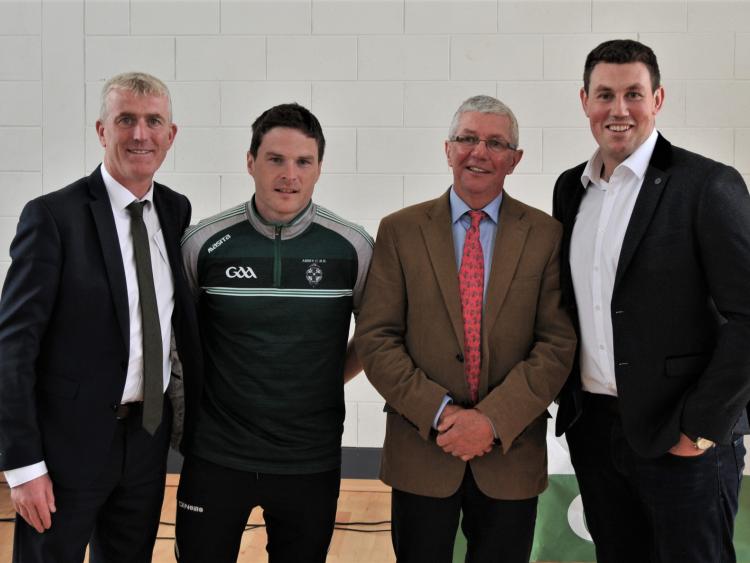 The Abbey CBS in Tipperary town have pulled off the most memorable of epic victories on the field of play over the years but a 'generational campaign' of perseverance to secure new indoor sporting facilities has finally succeeded in landing the school with an incredible off field triumph.
Last Friday was a very proud day for the Abbey CBS family as the impressive €1m PE hall resplendent in the Abbey colours was officially opened.
The opening represented an important milestone in the distinguished history of the school on an emotional day made all the more special by the presence of the members of the Abbey Harty Cup winning team of 1959 who were special guests on the day.
The long awaited and desperately needed addition to the school infrastructure will greatly enhance the Abbey's chances of repeating such Harty cup heroics in the future.
It will also enable the Abbey to broaden and develop sporting options in a school which is one of thirty in the country designated to have PE as a Leaving Certificate subject.
The PE hall represents the first stage of the development with phase two set to be delivered in 2022/23 comprising of dressing rooms and showers.
The school has also entered a separate agreement with neighbours Arravale Rovers for the development of an astro turf facility.
The opening ceremony was held after former board of management chairperson Maureen Gleeson cut the ribbon.
An active schoool flag was unveiled,musicians entertained the guests and students informed the large gathering of past and present principals, teaching staff, board of management , parents council and pupils of the story behind a beautiful mural which depicts the unique history of the school and the town on the wall of the new hall.
Principal John Kiely paid tribute to all those involved in the school, past and present, whose desire never faded despite all the obstacles and challenges placed in their way of delivering the project since the first application was made to government in 1998 by former Principal John Heffernan.
The Abbey principal said successive governments and ministers failed to deliver over the years despite the fact that the school was named among the top five sporting secondary schools in the country.
Nobody associated with the Abbey, said John Kiely , gave up even when their task of acquiring funds was made all the more difficult with the downturn in the economy in 2009.
Nothing would have happened, said John Kiely, were it not for a touch of luck which turned out to be the game changer that presented an opportunity for the plan to proceed.
The new PE hall, he said , would not have been possible were it not for the persistence of former board of management chairperson Maureen Gleeson who , he said, had battled to ensure Erasmus Smith Trust funds were released for use in the Abbey.
Attempts had been made in 1979 to release funds from the Erasmus Smith Trust for an extension to no avail.
Maureen Gleeson told the invited guests that she embarked on a campaign to have funds from the Erasmus Smith Trust released to the Abbey in 1993.
She thanked then government advisor Martin Mansergh for his assistance. Funds were eventually released in 1995 which allowed the school develop a special needs room and a woodwork room. Three years later a ruling in favour of the release of funds for capital purposes was granted and this allowed planning to take place for the PE hall project.
Maureen Gleeson said she was honoured to be asked to perform the opening ceremony and said the new PE hall had been "hard fought for".
Kieran Hickey, PE teacher said the new PE hall was in use since October and given the amount of activity it had accommodated in that time he could safely say that all the effort put in to deliver the project was well worth it.
It had been used not only for sporting needs but also doubled up as a multi purpose area for the whole school.
Many important events were held in the hall including a careers course , workshops, sports awards sports day and examinations.
It was essential , said the PE teacher, that the project was delivered in time to coincide with the Abbey being named as one of thirty schools in the country designated as a school with PE as a Leaving Certificate subject for the first time.
He paid tribute to th emembers of the '59 Harty Cup team for inspiring all those that followed in their footsteps and thanked Paddy Kelly , former PE teacher, for moulding the PE curriculum in the school.
Kieran Hickey said the PE hall would mean that the school would be able to broaden the range of sporting options available to pupils and it would play a massive role in enabling teams to prepare for the challenges they faced.
Board of Management Chairperson Mike Martin paid tribute to the work carried out by the members of previous boards of management which had played a role in bringing about such an historic day for the school.
He paid tribue to the valiant efforts of Maureen Gleeson, representatives of the Department of Education and Skills, to the builders and the designers of the building.
Mike Martin also paid tribute to the enthusiasm and passion of principal John Kiely and the board of management who refused to allow setbacks prevent them from delivering such an important project for the school.
John Kiely said it was an historic day and said the manner in which the PE hall was delivered should give the community, teachers, staff , parents and pupils the confidence to believe "they can achieve anything we put our mind to"