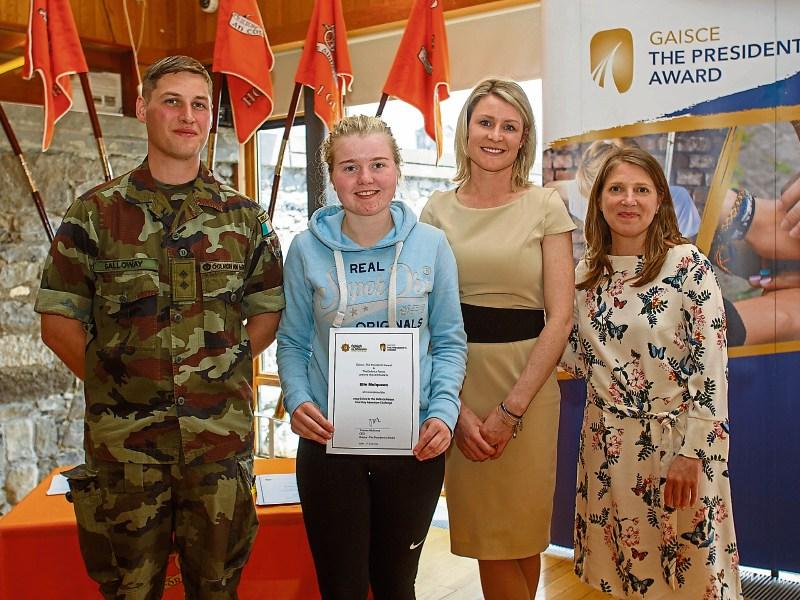 Two young people from Tipperary were among 30 recipients of the Gaisce awards on Friday after they took on the defence forces’ challenge of four days of hiking, kayaking, rock climbing, swimming and army assault courses.

Elle Mulqueen from Nenagh and Niamh Geraghty from Roscrea were worthy recipients of the President’s Award, granted to young people aged between 15 and 25.

The young recruits were put through their paces by personnel from the second Brigade Artillery Regiment of the defence forces, who led the Gaisce participants through a host of incredible adventure challenges, training and team-building exercises.

The defence forces adventure challenge shows young people just what they can achieve when they step outside their comfort zone.

Yvonne McKenna, CEO of Gaisce said: “Due to the leadership and generosity of the defence forces, 30 Gaisce participants from all over Ireland experienced a unique insight into military life first-hand.

“These young people pushed themselves to their limits, and in the process, developed skills, built confidence and created friendships and memories to cherish.

“We congratulate them all on their achievements.”

The once in a lifetime opportunity kicked off for the young people at the Custume Barracks, Athlone, before moving to the Curragh, Co Kildare and finishing on Friday after the participants completed their final challenge of conquering the Slieve Bloom mountains.

Defence forces spokesperson, Lieutenant Ian Gallaway said: “We hope that we can help to develop values in the young people who take part in the Gaisce programme.”