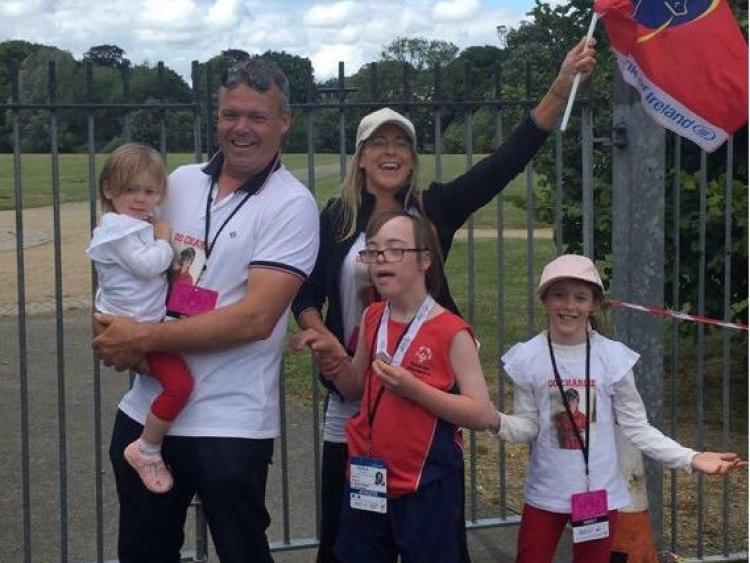 Jim and Angela pictured with their children.

Support: A fundraiser is planned to assist with ongoing treatment

The communities of Holycross, Thurles, Littleton and indeed all of mid Tipperary are coming together to support a local  family with a benefit night in the Dome on Saturday evening, August 17 2019.

Jim Corcoran Ballyvoneen Holycross Thurles, originally from Littleton was diagnosed with lung and brain cancer in mid-May and now his many great friend and relatives  have jumped in to support him, his wife Angela and three children Charlie, Libby and Poppy by pledging to raise as much funds as possible to assist with Jim's treatment programme.

Jim is the oldest son of Nell and the late Patrick Corcoran, with brothers P.J. Mickie, Paul and sister's Trisha and Fiona.  Angela's parent's Phillip and Kathleen McNeill and her brothers and sisters are all supportive of Jim at this time and both families are positive and reassuring him through his illness.

51 year old Jim, a carpenter by trade, who formally worked in a number of locations including London, and on many props and characters in Euro Disney Paris, before returning home to work in Erin Foods, had survived testicular cancer in his younger days and also overcame a heart attack five years ago.

However, the latest blow came out of the blue and began with what appeared to be a simple toothache, which resulted in him being diagnosed with tumours in the form of a primary cancer in his lung and secondary cancer to his brain.
Jim has been undergoing treatment since May and an ironic twist of fate has meant that he is under the care of Dr. Nadine in The Whitfield Clinic in Waterford - a doctor who was training under Dr. Hurley in Cork many years ago when Jim attended Dr. Hurley. Jim was one of his first patients after the doctor had return from Canada and Dubai where he worked for twenty five years, and he immediately recognised the Littleton man.

“I have great fate in Dr. Nadine and the surgical, Mr Shah, oncology, palliative care team in Clonmel, Waterford and the Primary Care team and the home care team in Thurles and Milford. I’m getting the best care possible. I am determined to fight and fight and to do whatever has to be done to beat this. I have always been a fighter and I am not giving up eventhough the prognosis is not good," Jim told the Tipperary Star this week.

Jim and Angela were married in Clonmel on May 31st this year despite plans for a wedding next year. They had a humanistic ceremony later that evening where Jim took a few hours off the hospital ward to celebrate their wedding vows. They were privileged to have had their three children, family members and friends in attendance on the day they will never forget- they regard their kids as miracles since Jim was told he may not have children after undergoing treatment for testicular cancer -Jim and Angela have been challenged many times in life but remained positive throughout.

In 2006 Angela and Jim were delighted to have fallen pregnant. Their first born was Charlie at 28 weeks gestation in Clonmel hospital. Charlie later spent four months in the special care baby unit fighting to live in Waterford Hospital following his diagnosis of Down Syndrome. This was a very worrying time for Jim and Angela but they took on their parenting role in a positive way through the ups and downs that came with it. “We are amazingly proud of Charlie and he brings so much to our family,” Angela states. One example of this was when Charlie took part in the Special Olympics Ireland 2018 where he won a silver medal for the 50 metre sprint and a ribbon for 4th place in the ball throwing with thanks to the athletics training he received in Scoil Aonghusa, Cashel and their coaches Helen, Eamon and Geraldine.

Jim and Angela later went on to have two beautiful girls Libby aged 10 years and Poppy who just turned 3 in June. Now his three children sustain him every day and give him the strength to fight the fight.
Jim was well on his wedding day, but the effects of the treatment and cancer are taking their toll now - his balance is affected from time to time; he suffers bouts of sickness and tiredness; and hair loss as well. But, he is a strong determined man, and together with Angela, they are a very potent team, who are meeting this severe challenge head - on.

The benefit night at The Dome, Semple Stadium will have music by The Jim of the Mill group, Seskin Lane and friends, and DJ Martin Maher all of whom will provide the entertainment on the night. All of those involved in the event, including the venue and performers, ticket and poster production etc. are doing so  free of charge, a fact that is deeply deeply appreciated by the special formed organisational committee. The Officers on the committee are Theresa Corbett and Fr. Celsus Tierney (joint chairpersons); Teresa Hickey and Dolly Purcell (joint secretaries); Jean Ryan and Vanessa O' Dowd (joint treasurers). There are at least twenty others involved in the running of the event, which has really taken on a life of its own.

Indeed,   getting people to help out has not been a challenge at all - they were more than willing and ready to help The Corcoran family during this difficult time. The committee is very grateful for the support received and for the giving of their time, of so many.

Doors open at 8pm and there will also be an auction, while a GoFundMe page will be up and running this week to allow people to donate online. Thurles Credit Union – BIC: THCUIE21 IBAN: IE97THCU99109210805697. Account Number 36484.
Please support this very worthwhile cause.