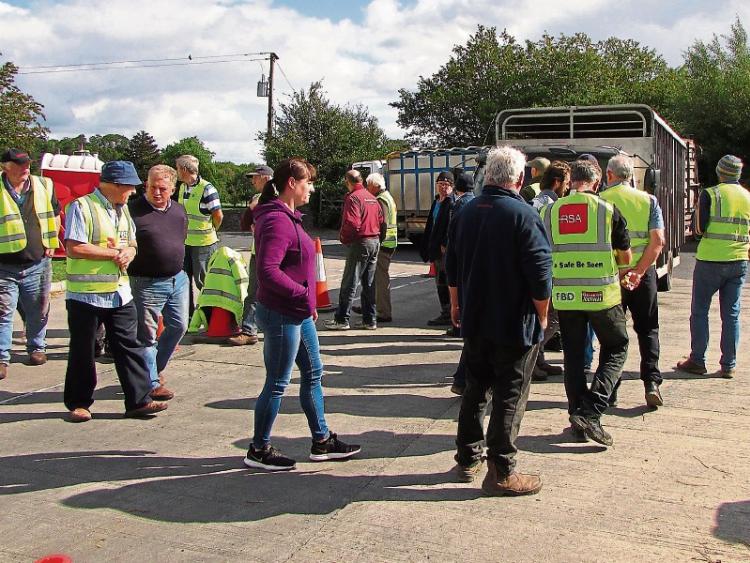 Farmers protesting at the entrance to Cahir's ABP meat processing plant today were defiant in the  face of a High Court injunction restraining them from blockading the factory.

About 20 farmers were picketing at the entrance to the beef processing plant on Cahir's Clogheen Road when The Nationalist visited this morning (Wednesday).

Gardai confirmed reports that more than 60 people protested outside the plant yesterday (Tuesday) evening after news emerged of a temporary High Court injunction being granted to the owners of ABP and Dawn Meats.

Details of the High Court Injunction with the names of 13 individual protesters handwritten on it were posted at the factory gate.

Placards erected at the entrance to ABP in Cahir bluntly declared: "Rest In Peace, Farming in Rural Ireland Killed Off", "Bullshit Free Zone, "Minister Do Your 150,000 Job" and Minister Creed Don't Bite The Hand That Feeds You".

The Beef Plan Movement, which spearheaded the first round of protests over beef prices a few weeks ago, has distanced itself from these latest "unofficial" protests. The Movement issued a statement yesterday evening (Tuesday) outlining that any of its members found to be protesting at meat processing facilities “will be expelled from the organisation”

The Movement has rejected the package drawn up to support the beef industry that was hammered out at negotiations in Backweston Co. Kildare and is seeking the reconvening of talk.

Protesters The Nationalist spoke to today were adamant they were involved in peaceful protest and were determined to continue despite the injunction. Most didn't wish to be named because of the High Court injunction

Three large round bales were used to block the entrance gate to Cahir ABP plant but they were rolled out of the way by protesters to allow employees and any vehicles not transporting cattle free access to the plant.

Trucks and trailers transporting cattle arriving at the entrance were stopped and requested by protesters not to pass the picket. Those who insisted on being allowed through were not prevented from entering the factory.

The driver of one jeep and trailer of cattle that arrived when The Nationalist was present turned back and went away after speaking with protesters.

One well-known cattle dealer in a jeep, who passed the picket with a small tailer load of cattle, was kept waiting for a while at the factory gate on his way out before the straw bales were pushed aside to allow him leave.

Gardai were keeping a watching brief over the protest. Newly appointed Garda Superintendent for the Cahir Garda District Denis Whelan, who was at the ABP factory gate, said the gardai were there to ensure the protest was peaceful and report that it has been peaceful by an large.

"We haven't had any issues really. We have been here from the start engaging with the farmers and the meat factory," he told The Nationalist.

He told The Nationalist of the price he got for 20 suckler Limousin cattle he brought to Thurles Mart yesterday (Tuesday) to illustrate the huge pressure he and other beef and suckler farmers are under at the moment.

"I came home with €5000 less than I had last year and the year before," he told The Nationalist. He pointed out that these were top quality continential Limousin cattle of between 500 and 600kg in weight. "

He said the Brexit threat was being used as a "great excuse" to keep cattle prices down at the moment.

The 60 year-old, who also has an off-farm job, plans to sell the last of his suckler herd next year. He said he will keep weanlings but ultimately the plan will be to rent out his land to a dairy farmer.

A suckler farmer from the Moyglass area, who has a herd of about 70 suckler cattle, said beef farmers can't pay their bills this year. Factories were paying prices of €3.45 and €3.50 per kg for R grade cattle where they previously were making about €4 per KG.  Input costs have gone through the roof in recent years and the impact of last summer's drought was still being felt by farmers, he pointed out.

Some of his farmer friends have moved out of beef and suckler farming because they can't make a living from it. At 55 years of age, however, he said he was too old to go into dairy farming.

A dairy farmer from the Ballylooby area, who didn't wish to be named, said he joined the protest outside the factory to support his fellow beef and suckler farmers.  He complained the big three meat processing companies - Kepak, ABP and Dawn Meats - were "ruling the roost" and the Competition Authority had failed farmers.

Independent TD Mattie McGrath was also at the protest. He said he was disappointed with the outcome of the recent talks between the Beef Plan Movement, farming organisations and meat industry representatives. He dismissed the talks as a "sham and PR exercise" that delivered nothing for beef farmers.

He said the warnings by beef farmers about the threat their livelihoods were under were not scaremongering. They were in the last chance saloon, he declared. People didn't realise that if the country's small and medium beef and suckler farmers were gone, whole rural communities will close up.

Deputy McGrath expressed concern that it these farmers are lost, Irish beef farming will move  more and more to large scale Amercian style feedlot beef production.  He pointed out though that in America legislation prevented the owners of meat processing plants from operating feedlots to prevent price controlling. Similar legislation should be enacted in Ireland, he said.