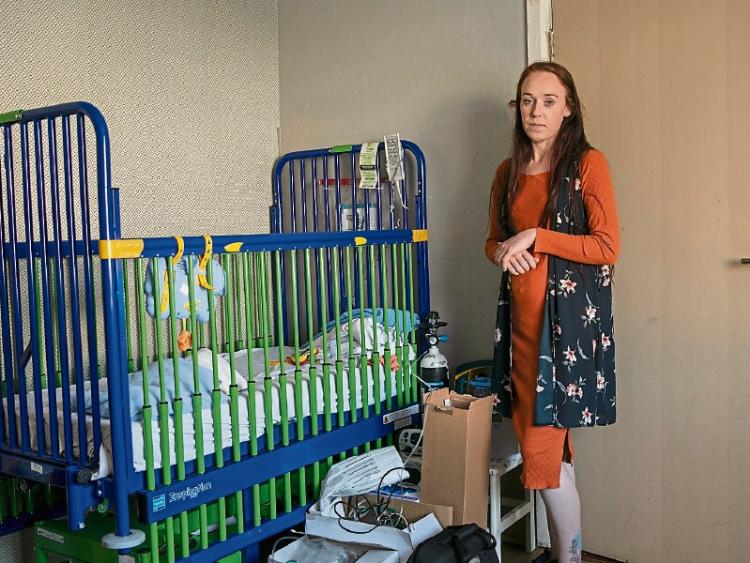 A Clonmel mother is waiting five months to bring her baby son home from hospital in Dublin and the latest delay is caused by a lack of nursing staff at an agency the HSE has contracted to  provide a homecare package to the family.

Rebecca McGrath from Oakland Drive, Clonmel has voiced deep frustration at the hold up in delivering the homecare package that will allow her now 10-month old son Alex, who suffers from a rare condition, to be discharged from Our Lady's Hospital, Crumlin and return home.

Clonmel TD Seamus Healy, who has been helping the single mother, declared the delay in getting Alex home to Clonmel is "totally unacceptable".

He complained the HSE should be able to directly provide the nursing staff for the homecare package but a moratorium on the replacement of HSE nursing staff throughout the country  for the last number of months is preventing this.

"Alex should be at home. He needs to be with his mother, brother, grandfather and family. He needs a normal home environment. He is ready to come home and is effectively holding up a place in Our Lady's Hospital that could be filled by another child. It's very shortsighted of the HSE and its really unacceptable." the Independent TD said.

A hospital cot with an oxygen machine and other medical equipment is set up in the sitting room of Rebecca's  dad's home in Oakland Drive waiting for Alex, who has so far spent all his young life in hospital.

The delay in getting him home means Rebecca must continue to spend a large part of the week with Alex in Dublin at significant financial cost and huge disruption to her family. She has a seven year-old son Ajay, who has been mostly cared for by her father Pat in Clonmel over the past year.

Alex has been a patient of Our Lady's Hospital since shortly after his birth on November 2 last year.

He has a rare condition called Stickler Syndrome and has also been treated for Pierre Robin Sequence, which is a cleft palate and undersized jaw (micrognatia). This is where the tongue is further back than it should be causing an obstruction to the airways. Due to this condition, he had to undergo a tracheostomy when he was just two weeks old.

Tragically his father, Paul Ryan, died in a fall accident just ten weeks before he was born. The first anniversary of his death was August 13.

It has truly been a traumatic year for Rebecca and her two children.

She said Alex was originally due to be transferred from Our Lady's Hospital to South Tipperary General Hospital on March 25 but she was informed four days before it wasn't going to happen.

She later found out the HSE hadn't been approved funding for extra staff to care for Alex. This was despite training being provided to other staff at the hospital in how to care for Alex.
Now that Alex is well enough to return home full-time, there has been an inordinate delay in the delivery of the homecare package she was approved.

She explained that she has been fully trained to assist Alex at home and her dad is still undergoing training to do the same but they won't be able to provide that care without respite nursing cover.

Alex stayed overnight at her dad's house for two nights recently and it required both Rebecca and her dad taking it in turns to stay awake to care for him through the night.

Compounding the delay in getting Alex home has been the fact Rebecca had to move out of the Ronald McDonald House that accommodates families of sick children being treated at Our Lady's Hospital in early June after Alex contracted an infection in hospital. She had to move out for infection control reasons.

The large family room accommodation in the Ronald McDonald House enabled her son Ajay to stay with her at weekends and there was cooking facilities. Since then she has been staying at the parents' accommodation in Our Lady's Hospital where there is just a single bed for her and no room for Ajay to stay.

She is currently spending about four days a week in Dublin with Alex and three days back in Clonmel. She travels by bus to and from Dublin. When she brings Ajay with her to Dublin they stay at a hotel that offers discounted rates to families of sick children staying at Our Lady's Hospital

Due to the financial pressure, her family set up a GoFundMe page two months ago called Alex's Fund Tipperary to raise funds for Rebecca's travel, food and accommodation costs in Dublin and to assist Rebecca to adapt her home to suit Alex's medical needs. A fundraising table quiz in The Venue Pub in Clonmel in July raised more than €900.

Rebecca said she is overwhelmed by the generosity and support people and local companies have given her.
She is worried and upset about the impact her time away in Dublin is having on Ajay, who starts first class in Ss Peter & Paul Primary School in Clonmel this Thursday.

"I missed nearly his whole school year last year. Ajay went from being with me every day 24/7 to everything being disrupted. He does feel lonely. My dad has been amazing. I would be snookered only for him.

"Dad brought Ajay to school every day last year, went to parent teacher meetings, did home work with him, all the normal everyday things. Up until I had to move out of the Ronald McDonald House we were coping because Ajay was coming up every weekend. That was the biggest loss to us."

She said tracheostomy patients from Dublin were able to leave Our Lady's Hospital after three to four months while a patient from Kilkenny was home after five months. Alex is the longest tracheostomy patient there. The longer he remains in hospital, the more at risk he is to picking up infections, she fears.

Rebecca said the staff at Our Lady's have been amazing and have been making phone calls and sending emails weekly to try and get the homecare nursing cover she needs.

Meanwhile, the long term prognosis for Alex is good. Rebecca said his cleft palate has been repaired and he is now eating solids and reaching his developmental goals. Medical staff hope to remove the tracheostomy tube before he is three years old and Rebecca says he should be able to lead a normal life thereafter.

Anyone who wishes to contribute to the GoFundMe page for Alex should log onto: https://www.gofundme.com/
f/7m7fe-alex039s-fund