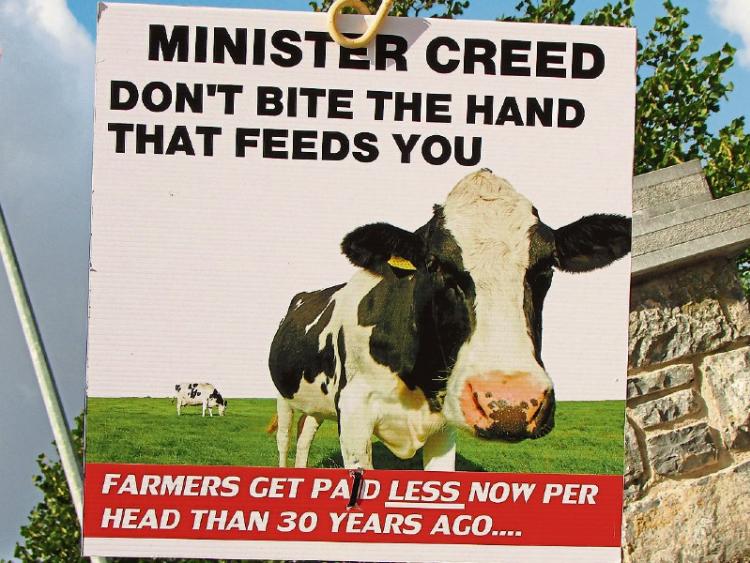 One of the protest placards at the entrance gate to ABP in Cahir yesterday (Wednesday) . The protest has been suspended until 8pm today (Thursday) to allow Chinese inspection take place at plant

Farmers protesting at the ABP plant in Cahir over low beef prices have suspended their picket from 12noon today (Thursday) until 8pm tonight to enable an inspection to be carried out by Chinese officials.

The protest has been suspended to allow livestock lorries pass into the factory.  The round straw bales, placards and vehicles the protesters placed at the entrance to the Clogheen Road based plant have been temporarily removed.

Independent TD Mattie McGrath, who has been supporting beef farmers protesting at the Cahir meat processing plant, said 180 cattle are expected to enter the plant while the picket is suspended to facilitate the inspection by the Chinese delegation.

Deputy McGrath said he supported the suspension of the Cahir ABP plant protest. "The last thing we want is to jeopardise a new agreement that would increase Irish beef exports," he said.

Tipperary based IFA presidential candidate Tim Cullinan also welcomed the Cahir ABP plant protesters decision.  He had yesterday (Wednesday) proposed a compromise whereby plants operated by ABP and Dawn Meats would notify protesters at factory gates in advance of when the Chinese inspectors are due to arrive and that protesters would then allow the inspection to take place.

He said it was very important that any new market for Irish beef wasn't put at risk but at the same time he stressed farmers have to get a decent price for beef. "If they don't, we won't have a beef industry in Ireland,” he warned.