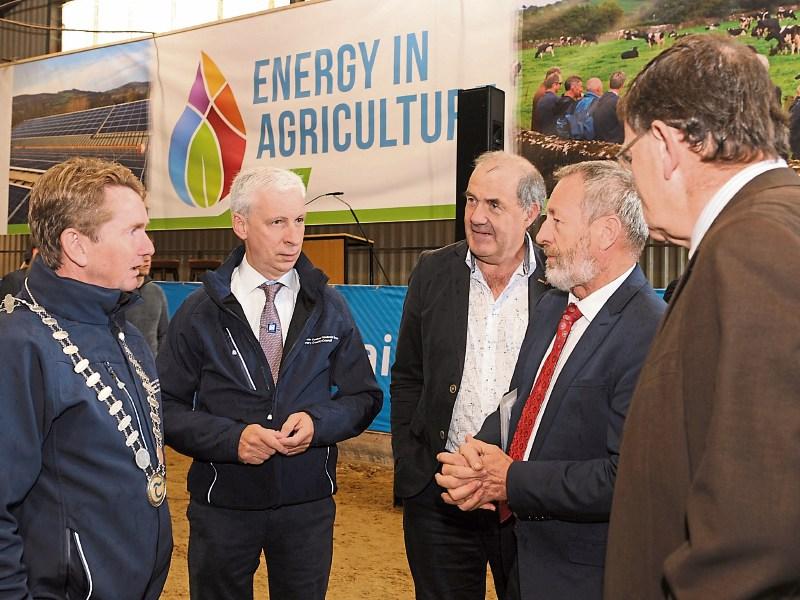 The annual Energy in Agriculture event in Gurteen College drew a huge turnout with terrific interaction between participants, exhibitors and panellists.

The wet weather may have affected the numbers slightly but did nothing to dampen the enthusiasm of participants interested in looking at ways to reduce energy consumption and increase the use of renewables on their farms, homes and businesses.

“In this, our fourth year of running this event, we are seeing an even greater intensity of focus on the importance of energy and renewables in climate adaptation,” said As Joe MacGrath, CEO of Tipperary County Council.

Fine Gael Ireland South MEP Sean Kelly officiated at the opening ceremony and in his opening speech he talked about Ireland’s climate action targets and that now was the time to get down to business in tackling this issue.

“We all have a role to play in reducing emissions,” he said.

Mr Kelly said that his advice to farmers was firstly to look at their own carbon footprint and ask themselves how they could reduce it, and, secondly, to look at what commercial opportunities that could be learned about it at the event and applied to homes, farms and businesses.

Agreeing with this sentiment, Barry Caslin, Teagasc, reassured farmers that “there is nothing new in renewable energy”.

He said that such technologies were well proven right across Europe.

Mr Caslin participated in the opening panel discussion and the first talk on the Support Scheme for Renewable Heat.

He explained that this scheme had been a real game changer for Irish farmers in terms of creating new opportunities both for the use of biomass boilers in poultry, pig and horticulture systems and also in the supply of biomass to end users.

Tom Short, IFA renewables chair said that farmers at the event were very interested in hearing more about renewables opportunities, positive climate actions and meeting with the different suppliers and experts in the EXPO arena.

The exhibitors were impressed with the level of knowledge and genuine intent among attendees.

According to feedback from regular exhibitors, farmers are ready to embrace renewables opportunities and avail of schemes to increase the amount of renewable energy produced on farms. A number of leads for substantial installations were agreed on the day.