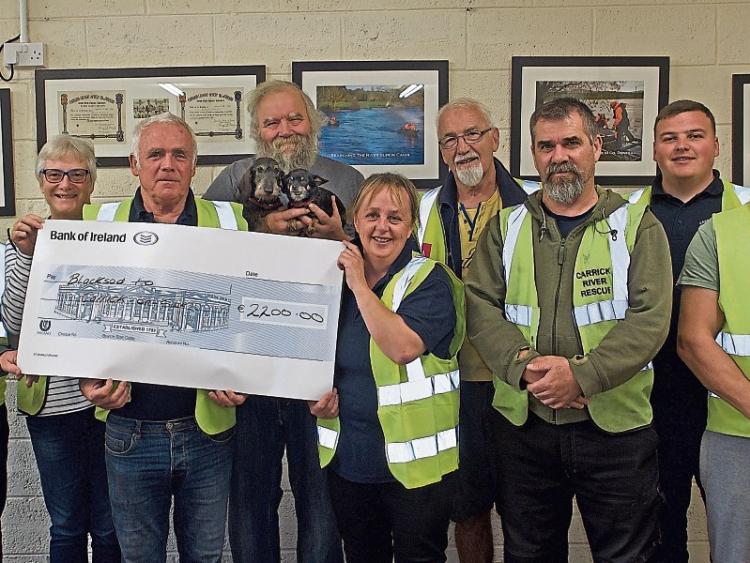 Carrick-on-Suir River Rescue member Catherine Foley cycled 314km from Blacksod Bay in Co. Mayo to Carrick-on-Suir on July 6 and 7 to fundraise for three charities close to her heart.

Having successfully completed the journey with the support of the River Rescue team in Carrick, who drove alongside and also took turns to cycle with her, a total of  €2200 was raised and cheques for €735 were each presented on Wednesday,  August 21 to Carrick-on-Suir River Rescue, Carrick-on- Suir Meals Assistance and The Deise Animal Sanctuary in Ballymacarbry.

Co-founder of the Deise Animal Sanctuary Rob Grace said he was thrilled with the gesture.

“It is very kind of you,” he said adding that the monies will benefit the welfare of all the animals at the Sanctuary in Ballymacarbry where they enjoy a caring setting to heal until a loving home is found for them.

Bob told the group that 1080 animals, birds horses, goats, chickens, geese, dogs and cats were rehomed last year and that more than 100 are now in residence in the Sanctuary waiting for a home.

Carrick-on-Suir Meals Assistance volunteer Katie Coughlan said their charity was delighted with the donation, which will help facilitate the delivery and provision of hot meals to 70 members of the community on Tuesdays, Thursdays and Fridays.

“Today our volunteers were welcomed to the River Rescue base where, not only were they treated to fantastic hospitality, they picked up a fantastic donation of €735, thanks to Catherine Foley’s sponsored cycle. Catherine continues to do tremendous work for the people of our town and we thank her most sincerely for her kindness,” said Katie.

Catherine talked of the cycle and how she was delighted to have completed it with the support of the brilliant team of River Rescue volunteers who drove alongside her on her journey and also took turns to cycle beside her, giving her moral support.

‘It was a terrific experience,’ said Catherine and she praised all who had supported her and sponsored her.  “The people of Carrick-on-Suir were brilliant, thank you, and I could not have done it without the support of the team behind me.”

She thanks James O’Sullivan and the Trotter Club Ladies with whom she walked and trained with for two months before the cycle.

She thanked Smart Art in Clonmel, who sponsored the signs, Glenpatrick Water, Clonmel for sponsoring the water for the two-day cycle and Lidl in Carrick for providing food for the journey. On the first day of the cycle, Catherine and her team threw flowers out to sea at Blacksod Bay as a mark of respect to the four crew who lost their lives in the Irish Coast Guard R116 helicopter crash in March 2017 and in memory of all fishermen who have lost their lives at sea over the years.

Catherine cycled 173 km from Blacksod to Galway City on July 6 and 141km from Galway to Carrick-on-Suir on July 7 with a River Rescue vehicle in front and behind her at all times. They all enjoyed the challenge, met many a character along the way and most importantly raised much-needed funds for three special charities.

Will she do it again? “Indeed, after a good long rest,” she laughed.