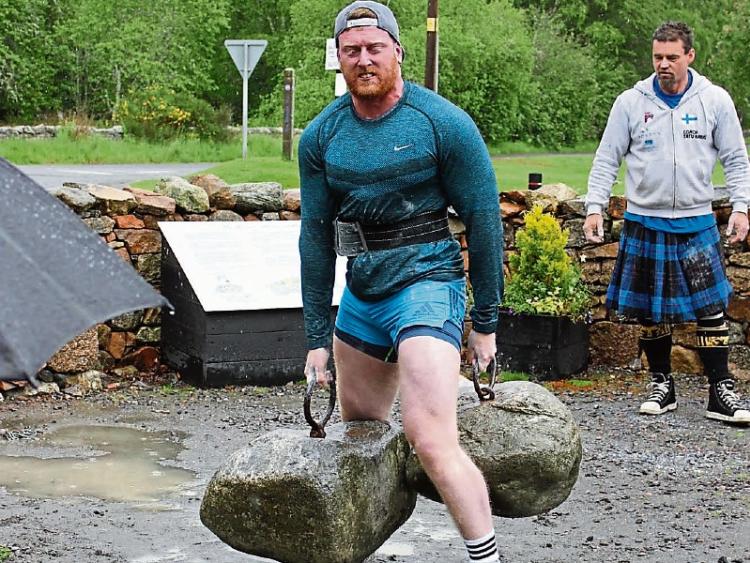 A Clonmelman has achieved an incredible feat of lifting that has earned its place in the record books.

Alex Kirwan from Knocklofty became the first man from the Republic of Ireland, and the 106th person since 1862, to lift the famous Dinnie Stones in Scotland.

Both stones weigh a combined total of 332.5 kgs - that’s just over 52 stones - and they have been attempted by thousands of people. Only a fraction, including all of the world’s top ten strongmen, have lifted them.

Alex was accompanied on the trip to Potarch Lodge in Aberdeenshire, on the banks of the River Dee, by his friend Gearoid McSweeney from Co. Limerick, who was also successful in his attempt.

“It was a brilliant feeling once we had it done”, says Alex, whose parents, Elaine and Pat, run Barne Lodge pub and restaurant at Rathkeevan, on Clonmel’s Cahir Road.

“It was more relief than anything. We were nervous about the prospect of travelling to Scotland and not doing it.

“The stones are so big and one is heavier than the other. You have to lift them between your legs because it’s too difficult to lift them side by side.

“It was a bit of fun but there was a serious side to it too”.

Both men also lifted four other stones in Potarch, including one that is 1,000 years old.

Standing six feet six inches and weighing 105 kgs (16 and-a-half stones), 28 year-old Alex was well equipped for the challenge. He and Gearoid McSweeney train in the gym five days most weeks and their interest in lifting the Dinnie Stones was triggered by a Netflix documentary called Strongland, which focuses on ancient lifting stone traditions in Spain, Scotland and Iceland, some of which date back thousands of years.

Jack Shanks, a famous lifter from Belfast, is featured in the documentary. Despite weighting just 11 and-a-half stones, he is credited as the first person to lift and then carry the stones unassisted exactly the same distance across the bridge in Potarch as strongman Donald Dinnie did in 1860, a feat which the policeman achieved in 1973.

His son Stevie Shanks also lifted the stones in February 2017. The pair are believed to be the only father and son to have accomplished the feat since Dinnie and his dad. Stevie, who tips the scales at just over 11 stones, holds the record as the lightest person to have ever lifted the stones.

Alex and Gearoid tracked the Shanks down through Stevie on social media and travelled to Belfast to meet them, while also practising lifting stones before taking on the challenge in Scotland.

A past pupil of Clonmel High School, Alex Kirwan works as a project specialist for the ProSearch legal research firm in Dublin.

He has to sit two more exams before becoming a trainee solicitor and had been on a training trip to the company’s Los Angeles office shortly before taking on the Dinnie Stones challenge.

He is now researching the history of lifting stones in South Tipperary, and once located plans to lift them.

The tradition of lifting was often used as a means to decide the leader of a village.