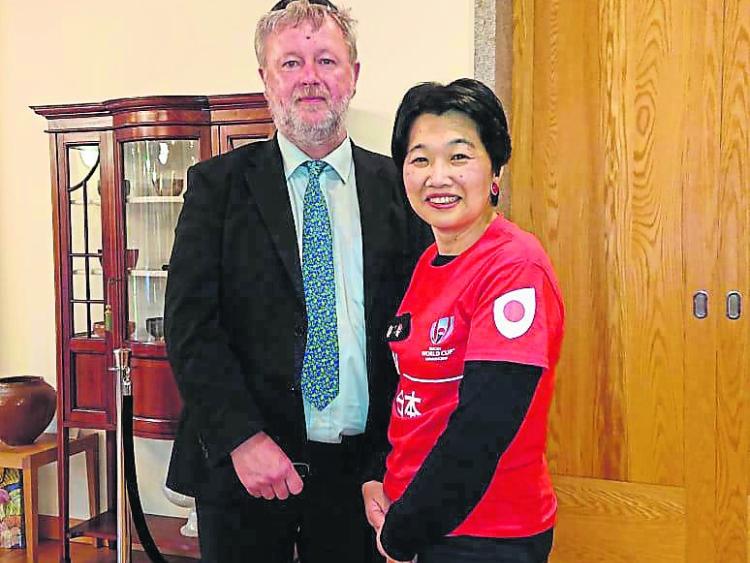 Templemore native, Dr. Michael Casey was among a number of guests to attend an official reception at the Japanese Embassy, Dublin to mark the Rugby World Cup 2019 (Tokyo 2020 Olympic & Paralympic Games).

Dr. Casey, a Fellow of the Irish State, is totally supportive of our ongoing sporting, cultural and economic connections between Ireland and Japan; our two island nations positioned on opposite sides of the globe, have enjoyed excellent relations since establishing post-war formal diplomatic ties in 1957.

Since Ireland joined the United Nations in 1955 and Japan in 1956, both sovereign states have striven for global disarmament and nuclear non-proliferation, whilst bilateral economic, trade and cultural links continue to develop each year.

To this end, Dr. Casey notes that ‘the future of the relationship between Ireland and Japan is strong, and rests on the unyielding fundamentals of a shared history, rich, encapsulating and, in my deliberations, often more than surprising’
At the reception, Dr. Casey further recalls his official visit to Japan in 1988 as a member of the United Nations Educational, Scientific and Cultural Organisation (U.N.E.S.C.O).

One of the highlights of the visit, as he recalls, ‘was a brief audience with the late Emperor Hirohito (1901-1989) at the Imperial Palace, Tokyo.

“From attending the monastery in Templemore in the late 1970’s as a pupil, I learned from my history teacher, Mr. Martin Ryan, a highly cultivated individual, that the 124th emperor of the Chrysanthemum throne was once perceived to be a living God by his subjects. Little did I think that one day I would be presented to a once presiding deity. Needless to say, General Douglas MacArthur, (1880 – 1964) wasn’t entertaining any such nonsense at the end of the Second World War (1945)’.
At another function in the neo-classical ambiance of the Akasaka Palace, Dr. Casey was presented to the then crown prince, Akihito and his wife, Michiko, who informed him that she was partially educated by an Irish nun, Sr. Paschal (Jennie) O’Sullivan of the Secret Heart Order and from Cloughduv, Co. Cork.

He also recalls discussing with her the writer and journalist, Patrick Lafcadio Hearn (1850-1904), the master horticulturalist, Tassa Eida, who designed the Japanese Gardens at Tully, Co. Kildare in 1900 and the Japanese collections at the Chester Beatty Library, Dublin.

This latter building houses a world-famous collection of Japanese woodblock and Surimono prints dating from the Edo period (1603-1868).

Today, Dr. Casey is a cultural and educational ambassador for the British and Irish Trading Alliance (B.I.T.A.), the Ireland-U.S. Council (I.U.S.C), the Irish Lebanese Cultural Foundation (I.L.C.F.) and the Tipperary Peace Convention/ Peace Awards. He is a fully accredited member of the international press and also sits on the Board of the National Union of Journalists, Ireland (N.U.J.). His focus, as always is on the promotion of independent media and critical freedom for journalists and news reporters.

Dr. Casey is also a staunch advocate for the promulgation of cultural diversity, human rights, the challenging of environmental issues and the attempts at bridging the world-wide digital divide and international cooperation agreements to secure the world’s cultural and natural heritage.

As a government of Ireland fellow/professor, Dr. Casey looks forward to meeting her in Tipperary town on November 7. This Peace Award ceremony has been running since 1983 and has achieved worldwide recognition; and, in acknowledgment of their wonderful contribution to the local community and to peace internationally, on October 30 Mr. Joe Quinn, his board/committee, and supporters will be received at Arás an Uachtaráin by His Excellency Mr. Michael D. Higgins, President of Ireland.