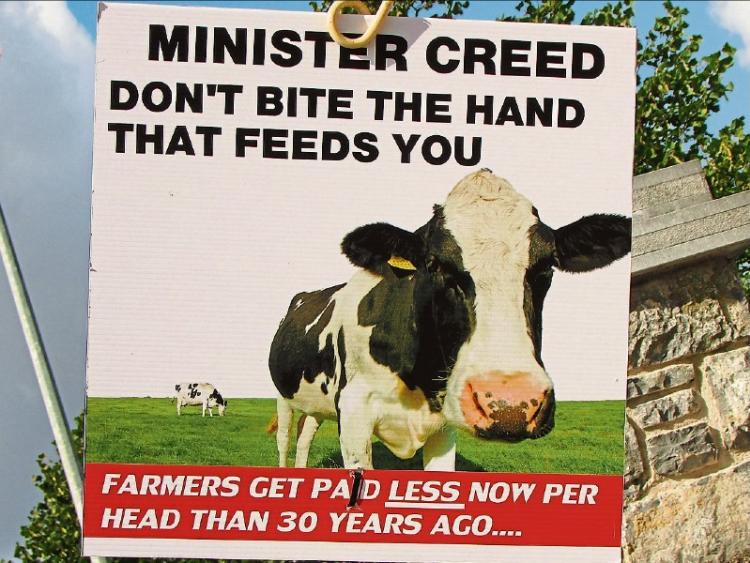 Independent Tipperary TD Mattie McGrath has called on Agriculture Minister Michael Creed to facilitate the inclusion of Independent Farmers of Ireland group representatives in any resumed talks to resolve the bitter dispute over beef prices.
He issued the call this evening as he joined farmers protesting outside Cahir's ABP meat processing plant. The appeal was issued in the wake of Minister Creed's renewed push over the past two days to end the deadlock in the dispute and get round table talks between all sides up and running again.
Protesters reported that staff at the Larry Goodman owned plant in Cahir were temporarily laid off this afternoon due to the ceasing of meat processing there this week but ABP has yet to confirm this to The Nationalist.

Deputy McGrath was joined by Independent Offaly TD Carol Nolan in calling for the Independent Farmers group representatives to be included in any round table negotiations that arise from the latest efforts to resume the talks.
The TDs appeal was issued as three independent farmer representatives were excluded from discussions over the past two days aimed at breaking the deadlock in the dispute.
Farmers protesting at ABP Cahir are being represented by the Independent Farmers of Ireland Group, which was formed last week to represent farmers picketing at meat factories around the country. Delegates from the pickets elected several national representatives to negotiate on the group's behalf.
A Co. Tipperary dairy and beef farmer, who is a member of the Independent Farmers group told The Nationalist this afternoon there were no plans at this stage to "stand down" the protest at ABP Cahir because of the exclusion of the group from any talks.
He and two other farmers The Nationalist spoke to at the ABP Cahir picket yesterday (Wednesday) said if talks resume "something concrete" must emerge from them that will result in an increase in prices for beef farmers.
What they didn't want was a "review" or "commission" to be set up. They criticised the fact beef prices weren't allowed to be discussed at the previous round of talks that ended in failure.
The three farmers said they didn't wish to be named because High Court injunctions taken out by the beef processing companies against protesters were "still live."
They said most farmers taking part in the protests at factory gates were members of farming organisations like IFA, ICMSA and ICSA but they felt these organisations have not adequately represented their views on this issue.
Deputy McGrath, meanwhile, said if the Minister’s call to dialogue is to have any credibility, he must insist that those who have been legitimately nominated to represent farmers interests be allowed access to the talks.
"Failure to listen to these representatives would signal a clear breakdown in trust even before any talks had begun," he told The Nationalist.
"We are at a loss to understand why such an exclusionary attitude has been adopted especially since the gravity of the crisis is deepening with each passing day.
"All voices must be heard at these discussions, otherwise it is very difficult to see how the outcomes can be accepted as binding.
"The farmers are willing to talk. The least the Minister and the other major stakeholders can do is reciprocate this constructive attitude by welcoming them to the process rather than shutting them out," the TD added.
Talks to resolve the dispute were originally scheduled to start on Monday evening last but were cancelled when Meat Industry Ireland (MII), which represents the meat processing companies, pulled out because protests and blockades were continuing at meat plants around the country.
There were renewed hopes today that talks can recommence if the factories agree not to resume processing cattle and protesters in turn end their pickets.  The provisional agreement between farmers representatives and the meat industry was hammered out at the Department of Agriculture Food & The Marine in Dublin on Wednesday night.

The urgency of resolving the dispute increased this week after MII announcing that 3,000 workers at meat processing plants around the country were being temporarily laid off because protests had shut down production by preventing cattle from coming into factories.
The Nationalist has contacted ABP in relation to reports that there were staff lay offs at ABP Cahir today but is currently awaiting a response.