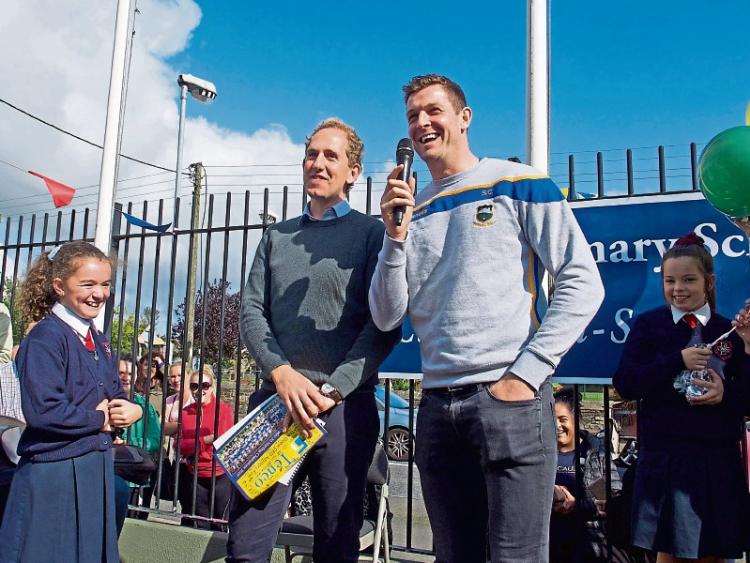 And the Drom-Inch hurler wasn't the only star attraction. He brought along the All-Ireland senior and U-20 trophies - the Liam MacCarthy and James Nolan Cups - to the school for the ceremony that took place in splendid sunshine on September 9.

The school was celebrating a national title of a different kind at the Green Flag raising ceremony.

He praised the school’s Green Flag Committee founder member and retired teacher Margaret Doyle and retired principal Sr. Veronica Casey, who has worked for many years with the Green School Programme and has been an inspiration to students.

Tipp's captain fantastic Séamus Callanan said he was delighted to be invited to the school with GAA County Board members Dinny Maher and thrilled to bring along the MacCarthy and Nowlan Cups.

He recalled seeing Liam MacCarthy Cup during his own primary school days and how everyone dreamed of lifting it themselves one day.

He lauded Carrick-on-Suir as a "stronghold of hurling" and described it as a very special part of Tipperary.

The skilled and enthusiastic  young players he witnessed at local summer camps were the future of Tipperary sport and hurling, Mr Callanan added.

Green School Committee chairperson Marie Hickey said she was truly delighted to see the 7th Green Flag raised. She spoke of the collective preparation and hard work that goes in to achieving each Green Flag and she congratulated all the committee and the commitment of everyone in the school to the Green Schools Programme ethos.

Before bringing the cups around to each classroom. a delegation of pupils did a questions and answers session with Séamus Callanan.

Representatives from Carrick Davins GAA Club and the Carrick Swan GAA Club in Carrick accompanied Séamus and Dinny to the Presentation Primary School and also on their visits to other local schools.