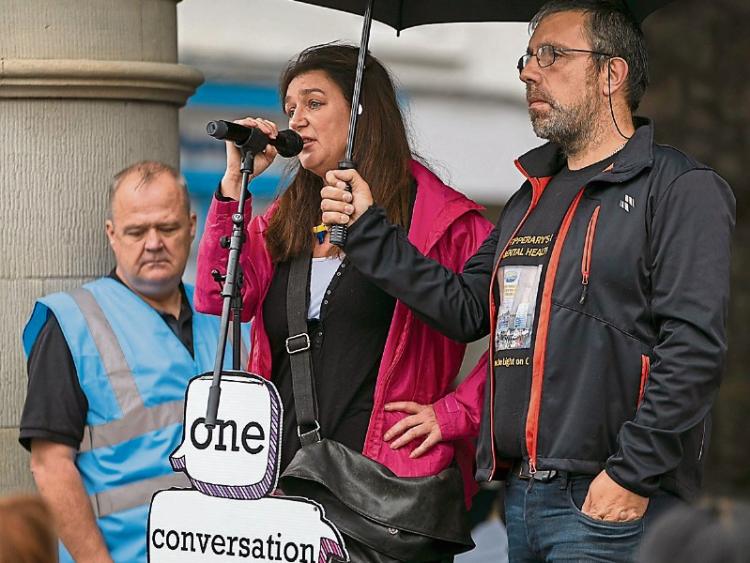 A Cahir woman gave a moving address at the Fight for Tipperary Mental Health Services march in Clonmel on Sunday after her brother who died by suicide after making repeated attempts to get the psychiatric medical help he needed in the two weeks prior to his death.

Caroline Lonergan called for the implementation of a list of  recommendations made by the jury that deliberated at her brother James’ inquest and she appealed to the government to restore acute psychiatric hospital services to the county now.

Ms Lonergan urged the county's politicians to work together to achieve these goals.

She  said she had become so vocal about Tipperary's mental health services   because of her brother's experience. In the two weeks before his death, he  visited his GP three times and was referred  to  A&E.

"It's kind of demoralising to think of somebody in that state having to sit for hours in A&E, first to see a medical nurse and then having to wait again to be assessed whenever someone is available to assess them. This is not acceptable but he did it."

She said his assessment was based mostly on a "yes, no, don't know" questionnaire, which she considered "inhumane".

"He used everything in his power to let them know he wasn't safe and he was not happy. He refused to sign the release form and care plan and he went home."

At the inquest, she learned  her brother rang the psychiatric services again that week seeking help.

"Can you imagine how worn out he was at that stage and still he was waiting for an appropriate appointment to come. Six days later he was dead and my mother found him. This is the reality of so many families in this county."

She thanked  coroner Paul Morris for adjourning  the  inquest to call the HSE in to give statements.  The inquest jury made a number  of recommendations arising from her brother's experience.

One calls for a  protocol that first time users of the mental health services  be accompanied by someone when they enter A&E. Another recommends the patient's GP be immediately informed. Sending an automated letter a few days later wasn't  good enough.

Ms Lonergan also called for supports to be put in place for family members of people  with  mental illness.  “It's desperately, desperately hard for regular people to know what to do when somebody they love is suffering from mental health issues."

She also complained there was no "dual diagnosis system" where people seeking help for addiction  are also diagnosed and treated for mental illness. Addicts suffering  psychosis were mental  health patients They were often sent home to wait for addiction services but they were  too dysfunctional to do this.

Ms Lonergan admitted she has almost lost count of how many people she has lost to addiction and suicide. "That is very, very sad. I am not immune to it, believe you me, my heart breaks daily.”

She concluded  by telling the rally  the upset mother of a young girl  contacted her during the week fearing her daughter was going to be discharged from hospital.

"Her mother rang me at an awful hour of the night crying  saying they wouldn't keep her.  They fought for her to be kept (in hospital). She is in Kilkenny at the moment. Everyday they are talking about discharging her but she is still there.

“I hope she is doing well today. I am here today for people like her ."

Two pages coverage and photos of the Fight for Tipperary Mental Health Services march are in this week's print edition of The Nationalist now in local shops.