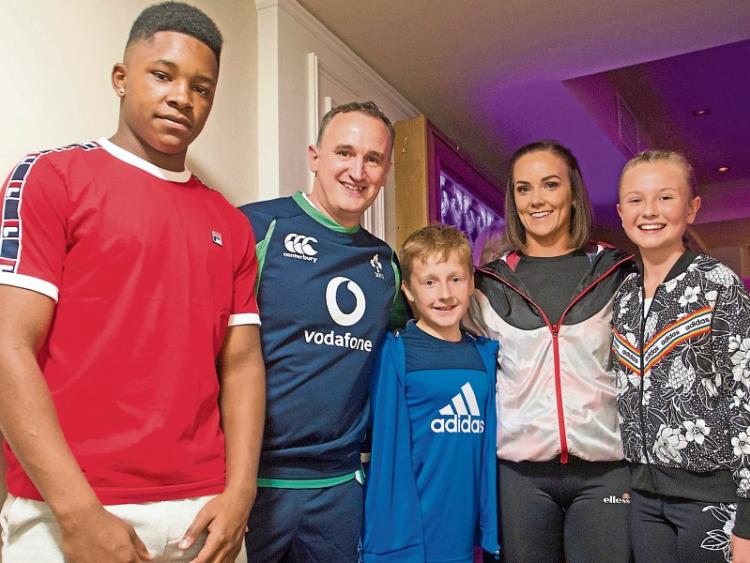 The latest fashions from local retailers were showcased on the catwalk in Carrick-on-Suir at a night of glamour that raised just over €5000 for the Irish Guide Dogs for the Blind charity.

The Carrick Couture Fashion Show in the Carraig Hotel's ballroom on Friday night, September 20 was enjoyed by a capacity crowd of more than 200.

Organiser Lynne Keane of Lynne Keane Travel Counsellors in Carrick-on- Suir said she was "absolutely thrilled" with the turnout and pointed out they could have sold a lot more tickets if space allowed.

She hosted the fashion show as Travel Counsellors has adopted the Irish Guide Dogs for the Blind as its chosen charity to support. Lynne presented a cheque for the €5004 proceeds to the charity last week. The money will be used to fund a year of training for a  guide dog pup  called Reuben.

Lynne from Castle Court, Carrickbeg paid tribute to the local business community for their support of the fashion show from allowing their fashions to be featured in the show to  supplying raffle prizes.

Carrick-on-Suir stores Leonie's Boutique, In the Wardrobe, Bourkes Menswear, My Dress Bridal Wear, Wurlitzer,  Outfield Sports, Meany's Shoes and Blarney Woollen Mills all showcased their latest styles in the show. Autumn/winter fashions from Carraig Donn and Orchid Boutique in Waterford and a display of hats created by milliner Gwen Walsh of Breathnach Designs were also featured.

A team of local models showcased the fashions. Among them was local Fine Gael Cllr Seanie Power from Rathgormack, who gave a flamboyant turn on the catwalk.  Mary O'Neill of WLR FM was  MC and  DJ Willie Allen provided the music.

In between the fashion, there was a hair styling demonstration from Amy Williams of Vogue Hairdressers in Piltown and make-up demonstration by Jayne Carey of Waterford based  J'Adore.

Irish Guide Dogs for the Blind volunteers Jill McIllroy and Marian White brought along ambassador guide dogs Siofra and Triggs to the fashion show and spoke about the charity's work training guide dogs for  visually impaired people and children with autism.

The fashion show concluded with the awarding of the best dressed audience member prize to Ann Brennan   and a raffle and holiday prize draw.  A seven night Eurocamp holiday, a stay in the Lyrath Hotel in Kilkenny and range of vouchers were among the generous  prizes won by lucky visitors to the show. After the show, many people stayed on in The Carraig Bar to enjoy the music of The Bad Shirts band.

Lots more photos from the fashion show are published in this week's print edition of The Nationalist now on sale in local shops.