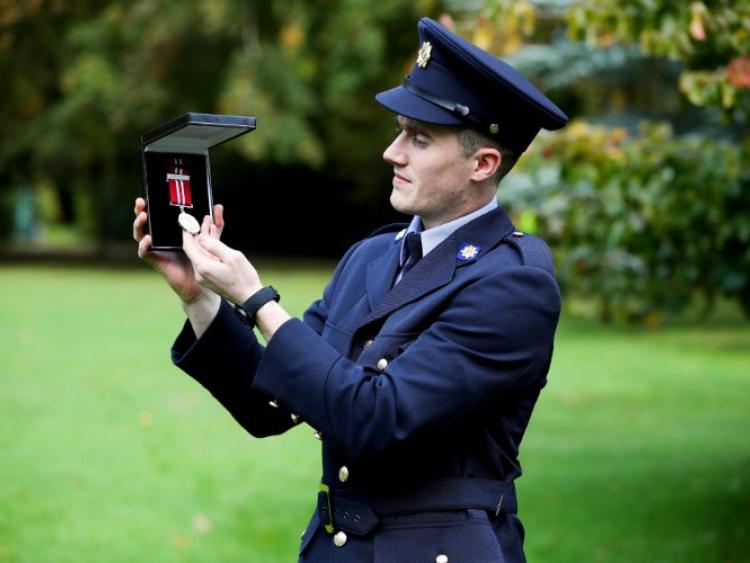 Garda MJ Carroll was honoured with an award for bravery

Garda MJ Carroll was one of four Gardaí who came to the aid of a man in difficulty on the parapet of the M50 Bridge over the Strawberry Beds who were honoured at the National Bravery Awards recently.

On 26 September 2018, Garda Sergeant Gavin Coleman and Garda M.J. Carroll responded to a call of a man standing on the parapet of the M50 Bridge over the Strawberry Beds. Garda Darren Blackwell and Garda Jason Walsh joined them shortly after. The man then made an effort to jump off the bridge. The Gardaí intervened and ended up struggling with the man, and managed to hold on to him. The Gardaí involved put themselves at great risk of plunging to their deaths. After managing to pull the man back across the barriers, Sergeant Coleman, Garda Carroll and the man fell off the gantry and fell 7 feet onto the M50 roadway.

The Bravery awards were set up in 1947 to recognise those who risked their lives to save others and are administered by Comhairle Na Míre Gaile – the Deeds of Bravery Council – which is chaired by Ceann Comhairle Seán Ó Fearghaíl TD. Today’s ceremony saw 20 people receive Bravery awards, including one posthumous honour.

The Ceann Comhairle said: “The National Bravery Awards give us an opportunity to celebrate the courage of our emergency services and people who risk their own safety to protect their fellow citizens. It is important to recognise the sacrifices made by people whose selflessness can serve to remind us of our duty of care to one another. It is an honour to present these 20 Bravery Awards today, including the posthumous award, and I thank all recipients for their courage.”

The Deeds of Bravery Council includes the Cathaoirleach of Seanad Éireann, the Lord Mayors of Dublin and Cork, the Garda Commissioner, the President of the Association of City & County Councils and the Chair of the Irish Red Cross.

The Council may award Gold, Silver or Bronze medals as well as Certificates of Bravery.