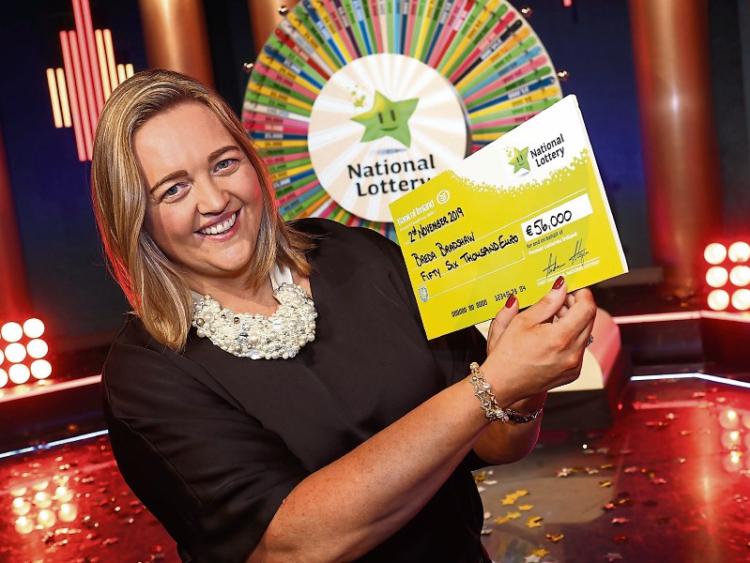 Caroline Graham with the cheque for €56,000 she won for her aunt on Winning Streak

A Tipperary woman who went on the National Lottery TV game show Winning Streak for her aunt, won €56,000 on the RTÉ One show last Saturday (2nd November).

Caroline Graham from Killenaule was delighted to hear her aunt’s name, Breda Bradshaw, was drawn for Winning Streak.

Winning Streak luck runs in her family as almost 19 years ago (in December 2000) her grandmother’s name was pulled from the drum to appear on the show. Her gran, Christina Healy didn’t go on the show but asked her brother (Caroline’s uncle) Denis to play in her place and he won £15,000.

True to family form, Breda decided against going on the show this time and she asked Caroline to play in her stead. Breda watched her niece on the show from the comfort of her sitting room in Killenaule.

Caroline was happy to do a good turn for her aunt and she certainly did her proud as she spun the iconic Winning Streak and won €25,000, bringing her total winnings to €51,000.

Caroline works in the finance department of the Anner Hotel in Thurles. She is mum to son Conor, both of whom share a love for horses and racing. They have both been to Royal Ascot and Cheltenham as well as a number of other race meets over the years. Caroline and Conor also frequently visit Old Trafford, so Conor can watch his beloved Manchester United

In her spare time Caroline likes to travel around Ireland visiting other hotels and cites Kerry as her favourite holiday destination in the country.

The National Lottery game show is co-presented by Marty Whelan and Sinead Kennedy and features some perennial favorite games including Play or Pay, Roll for Riches, WinFall and Electric Dream – where one player will win an electric car worth €25,000.