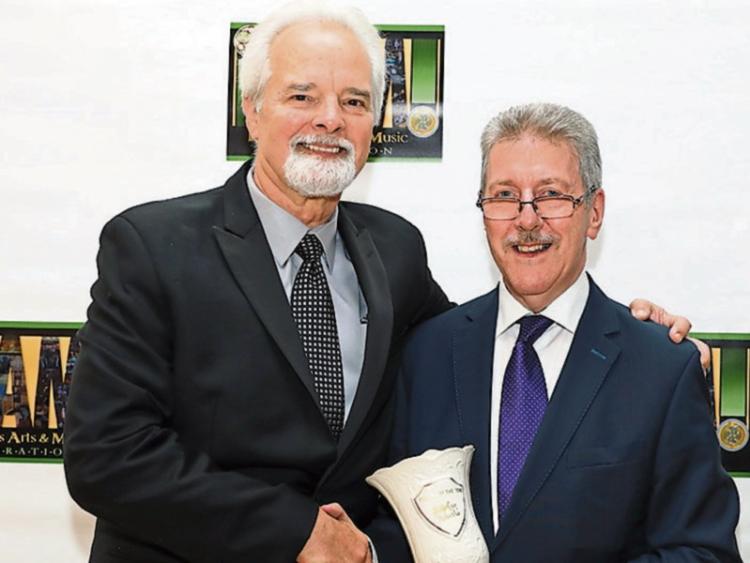 Miami Showband massacre survivor Stephen Travers from Carrick-on-Suir has been honoured in Chicago for his tireless work for peace and reconciliation in Northern Ireland.

Mr Travers was presented with the Irish Book, Arts and Music (iBAM) Person of the Year award at a gala dinner attended by 600 people at the Irish American Centre in Chicago on Friday, October 19.

Irish Senator for the Diaspora Billy Lawless, who is a prominent Chicago based businessman, and the Irish Consul General Brian O'Brien were among the guests at the awards ceremony that featured some of the leading figures in Chicago's Irish-American community.

Mr Travers received the award in recognition of his work as chairman of the Truth and Reconciliation Platform (TaRP),  the organisation he co-founded three years ago to promote reconciliation and lasting peace in Northern Ireland.

TaRP does this by highlighting the terrible consequences of terrorism on both sides of the politicial divide through the stories of its victims.

The organisation hosts reconciliation events throughout the Republic and Northern Ireland where Stephen and other victims of terrorism during The Troubles share their experiences and the impact of violence on their lives.

Mr Travers said the award was a great acknowledgement of the work TaRP is doing and he stressed he accepted it on behalf of all the people involved in the organisation. He particularly mentioned TaRP's co-founder Eugene Reavey, whose three brothers were murdered by the UVF in Whitescross, Co. Armagh in 1976 and Joe Campbell, whose father Joseph was an RUC officer murdered by the UVF in 1977.

He also addressed a number of events in Phoenix, Arizona during his trip to the US.

Stephen Travers was the bass guitarist in the popular Miami Showband who were targeted in an horrific loyalist attack at Banbridge, Co. Down on July 31, 1975.

Three of his fellow band members -Fran O'Toole, Tony Geraghty and Brian McCoy - were shot dead by the notorious Glenanne Gang after the bomb they were trying to plant in the band's minibus exploded. Stephen was seriously injured by a dum dum bullet when the terrorists turned their guns on the band members. He and Des McAlea were the only band members to survive the massacre.

Forty-four years on and 21 years after the Good Friday Agreement, Mr Travers said the North is facing into dangerous times because of  the political instability and tensions due to Brexit and the continued suspension of the Northern Ireland Assembly.

"There are a lot of people recruiting in various factions; people who feel the only way around this is to kill each other, which is never going to work."

Mr Travers said some peoplewere even trying to get "up in arms" over the "wet border" down the Irish Sea agreed between the EU and British Goverment in the latest Brexit negotiations.

Mr Travers stressed  TaRP doesn't get involved in politics. The reconciliation events the organisations hosts simply tells people the terrible consequences of going down the road of violence.

He hopes to organise a TaRP event in his native Carrick-on-Suir or Clonmel in the near future.