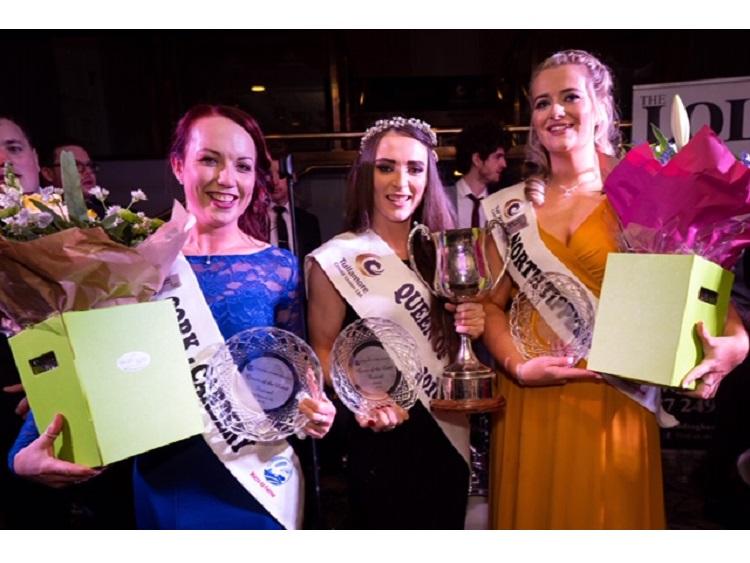 Winner Sinead Conry (centre) of Roscommon is pictured with right, first runner up Clodagh Ryan from Tipperary and second runner up Laura Cable from Cork

Sinead Conry of Roscommon was crowned the 55th Annual Tullamore Credit Union Queen of the Land 2019 on Sunday, November 10. Sinead came out on top of 29 Queens by impressing the judges with her personality, her passion for her farming work and connecting with her local community. Sinead is a 22-year-old student in DIT from Castlerea. She is an active member of the newly developed club, Elphin Macra na Feirme, and is currently club secretary. Some of her many hobbies and interests include showing cattle of which she is the current secretary of the Connaught branch of the Hereford Society, Sinead also enjoys farming and socialising. For Sinead, winning the title of the Queen of the Land 2019 means more to her than most as her mother entered the competition in 1983.

The first runner up is Clodagh Ryan from Thurles Macra, North Tipperary. Clodagh works as an Animal Evaluation Analyst with ICBF and enjoys breeding and showing Charolais Cattle. Second runner up is Laura Cable from Carbery Macra, Laura is a dairy farm manager and has been involved in Macra na Feirme since moving to Clonakilty.

The weekend saw 29 Queens descend on the Bridge House Hotel, Tullamore early Friday morning. They then set off for a tour of the faithful county, stopping at Clonmacnoise one of the country’s top visitor attractions, and Dan & Molly’s in Ballyboy, a small thatched pub favoured by locals. That evening, the Queens returned to the town for the Grand Opening at the Tullamore Credit Union at 6pm, followed by Bingo Bongo madness and the very entertaining Dooley Brothers in Hugh Lynches.  On Saturday morning, the girls were up early for interviews with our esteemed judging panel – Ray Spain, Vice Chairperson of Tullamore Credit Union, Louise Crowley, reigning 2018 Queen of the Land and Amii McKeever, Editor of the Irish Country Living, after which they were treated to hair styles by Ritzy’s Tullamore. Each queen was then greeted by their escorts in the Phoenix Bar. The escorts were put through their paces and interviewed by one of Macra own, Adam Burke, and if he deemed them fit introduced them to their Queens. On Saturday night, after the Queen’s onstage interviews, the crowd was entertained by Big Generator, the Groomsmen and Joe Wynne and famed DJ Mark McCabe until late.

But no rest for the wicked – after a long night of partying, the Queens were up again Sunday morning to attend a very special ceremony in the Church of the Assumption, Tullamore and met some of the local people of the town. Afterwards, they headed to the Harbour Bar for some well-earned refreshments and a chance to chat and mingle. The greatest work was yet to come however, as the girls prepared for the Gala Banquet. Each Queen brought glamour and style to the closing event of the festival – rivalled only by Niamh McDonald, chairperson of the Festival. Following the delicious banquet, the LOLS entertained the crowd. The only interruption to the dancing on the floor was at 12 midnight, when the crowd all gathered in anticipation for the announcement – who is the 2019 Tullamore Credit Union Queen of the Land?

Chairperson, Niamh McDonald had this to say after the announcement: “We, the committee, are delighted to see Sinead crowned the 2019 Tullamore Credit Union Queen of the Land. We are sure she will do a great job of representing our Festival all over the country for the next year. We would have been happy, honestly, to see any of the contestants win as they have all proven to be charming, intelligent girls. We hope they will return to the Festival in the future. Of course, we are also sad to see our 2018 reigning Queen, Louise Crowley, leave her role as well as she has done a superb job throughout her reign. With another Festival closing, I am most grateful to all the hard working committee, all our generous sponsors and most of all to our supporters, who came from all over the country and further afield to enjoy the Tullamore Credit Union Queen of the Land Festival 2019”.