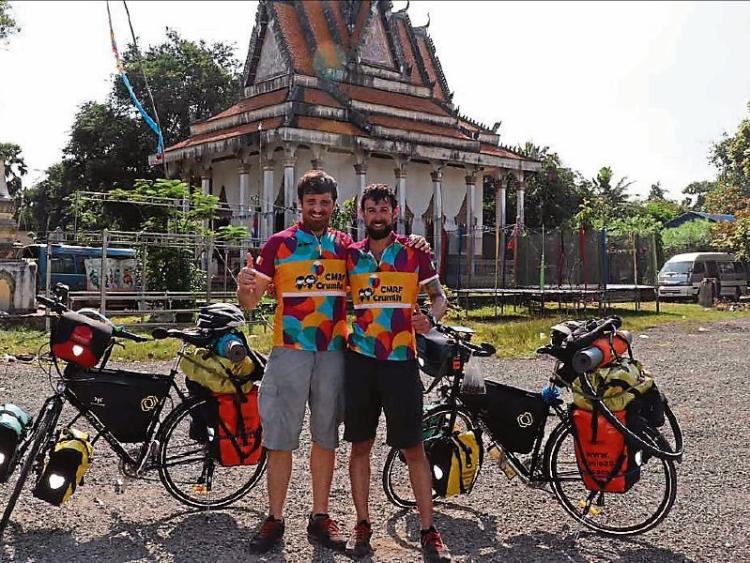 Two young men from the Carrick-on-Suir area are limbering up to run their fourth ultra-marathon run as they cycle across the globe from Sydney to Dublin to raise funds for two children's hospitals.

Daithí Harrison from Clairin, Carrick-on-Suir and Paddy Flynn from Knockalavalla, Rathgormack will compete in their fourth ultra long distance race in Laos over the next few days.

The two friends are only just recovered from their their third ultra-marathon, which they ran in Siem Reap in Cambodia on Sunday, November 3.

Daithí and Paddy are three months into their epic cycle from Australia to Ireland that is taking them through 28 countries and three continents.  The duo are raising funds for CMRF Crumlin,   the charity for Crumlin children's hospital and the NCRC (National Children’s Research Centre).  and Sydney Children's Hospital Foundation as part of their expedition.  As well as cycling, they are running an ultra-marathon in each of the 28 countries they travel through.

To celebrate completing the Australian leg of their journey they ran a 50 mile race in Dwellingup, Perth.  Their second ultra-marathon was a gruelling 64km run around on the  Vietnamese Island of Phú Quốc.

Daithí said they are enjoying learning about the culture and histories of all the countries they are visiting.

“We decided to raise money for CMRF and the Sydney Children’s Hospitals Foundation because they do wonderful work for sick children in Ireland and Australia; and making the journey from Sydney to Crumlin is a way of not only helping both charities but also marking a link between the two,” they said.