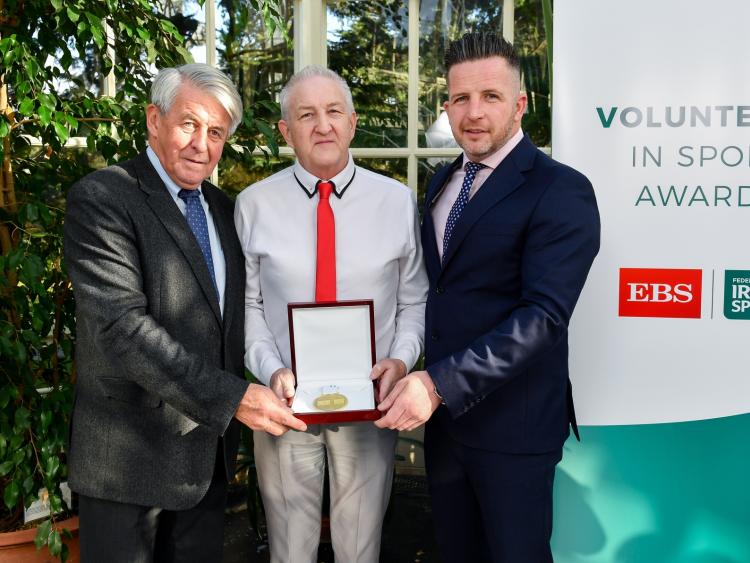 Volunteers from all 32 counties were honoured at the Volunteers in Sport Awards, hosted by the Federation of Irish Sport, in partnership with EBS, in Farmleigh House, Dublin. The Tipperary winner was Martin Quinn of Galtee Rovers GAA Club.

The Volunteers in Sport Awards were created to recognise the contributions, commitment and dedication of the 450,000 volunteers who give their time to Irish sport each year.  This equates to approximately 37.3 million hours of volunteering across Ireland’s 14,000 registered sports clubs and associations.

Members of the public, sports clubs and governing bodies were invited to nominate an individual whose contributions to sport has made a real difference to their community, club or county.

The award recipients were selected by a judging panel consisting of 12 individuals drawn from sports administration, the volunteer community and media, including former Director General of the GAA, Paraic Duffy, The Irish Times sports journalist and activist, Joanne O’Riordan and former Irish rugby international, Trevor Ringland.

Minister of State for Tourism and Sport, Brendan Griffin TD who was in attendance to present the awards said; "It is a real privilege to recognise the contribution made by those who do so much for others in fulfilling the less glamorous but most definitely vital and often overlooked tasks involved in almost any sport you can imagine.

The men and women honoured today may not be household names across the country but in their own communities they are real treasures".

Speaking at the awards, Mary O’Connor, CEO of the Federation of Irish Sport, said; "Sport matters. It contributes to our health, binds us together as a community and supports the economy while bringing a sense of pride to us all.
“This would not be possible without the volunteers who share their time and expertise on pitches, tracks, gym floors and swimming pools across the country each and every week".

Martin has been the driving force behind numerous community development projects, which have had a major impact on the social, sporting and cultural life of communities. He is a strong believer in the ethos and values of ‘community in action’, as pioneered by the late Canon John Hayes, founder of Muintir na Tíre. He was National President of the Community Development Organisation, Muintir na Tíre (2008-2011).

Chairperson of Judging Panel, Paraic Duffy, former Director General GAA said; "I am delighted to congratulate the recipients of the 2019 Volunteers in Sport Awards and to commend the Federation of Irish Sport on restoring, with the support of EBS, this prestigious scheme. It is no exaggeration to state that volunteers are the lifeblood of Irish sport and there is not a single sport that is not utterly dependent on volunteers in its efforts to grow participation and provide a positive sporting experience for its members"