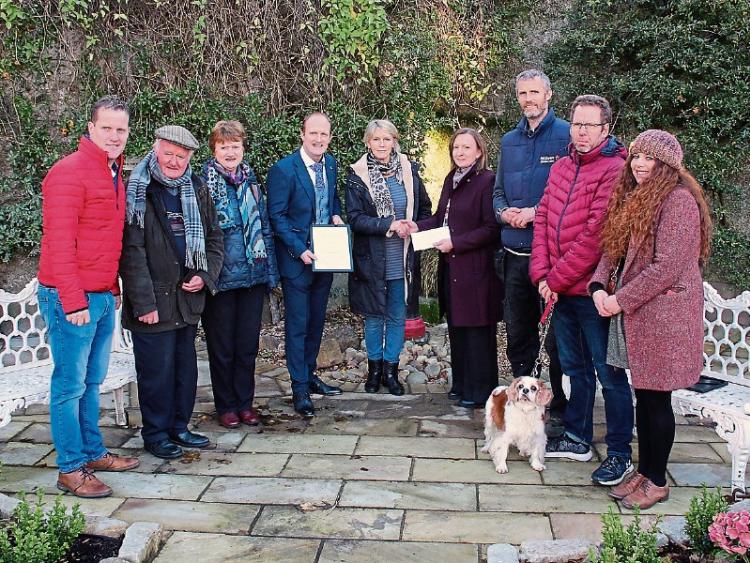 The work of this committee and their awards contributes greatly to Roscrea Tidy Towns’ performance in the national Tidy Towns competition as it encourages businesses, streets and estates to undertake works to enhance their respective localities.

Imagine Roscrea Tidy Town’s delight to find out that this year, one of their projects had been considered by the adjudication committee and was being presented with and award!

Having deliberated, the adjudicators awarded the Roscrea enhancement committee’s best heritage award, proudly sponsored by Tipperary County Council to Roscrea Tidy Towns for their revamp of the Moneen Garden at the junction of the Convent Hill and Rosemary Square.

This area was one of the first constructed in 1988 by the then fledgling committee, having just established itself in 1986.

In the years that followed, it was maintained, but the planting had become somewhat rank and the pathways eroded. It was decided in 2018 to transform the area with the introduction of low-level planting, resurfaced pathways, seating, a bicycle parking facility and a water-feature.

This was completed in July of this year and many compliments have been received by Roscrea Tidy Towns. The receipt of this Enhancement Award is an official positive recognition of the work’s value to the community.

On September 28 last, four members of Roscrea Tidy Towns travelled to the Helix in Dublin to represent the group at the awards ceremony.

A very full year had been put in by the group with many new projects still ongoing. The group were delighted to find that we had been awarded a bronze medal once again.

It was felt that it was a just reward for the year’s work and this represents our sixth medal since our first one in 2013 with a silver one being awarded in 2017.

Many of the wonderful projects such as the revamp of the Moneen Garden were at an ongoing stage when the adjudication took place and as was remarked in the judge’s comments, marks could not be awarded for these.

With the encouragement from this best heritage award, we look forward to capitalising on this and other amenities next year. Roscrea Tidy Towns would like to thank Ken Wall Landscaping for the work done on the Moneen Garden.

Roscrea Tidy Towns would like to thank the enhancement committee for their work which is such great benefit to the town and to us in our national award endeavours.

We would also like to congratulate all the other estates, streets and businesses that received an award this year – again, it can never be said often enough, it is the work of these recipients that enhances our wonderful town and makes us all proud.

Roscrea Tidy Towns increased their mark to 322 points, gaining four marks on the 2018 result without losing a mark in any category. Marks are becoming harder to get the higher you achieve, so a whole community effort is the way forward to higher marks.

Our mark of 322 would have gotten us a gold medal only a few years ago.